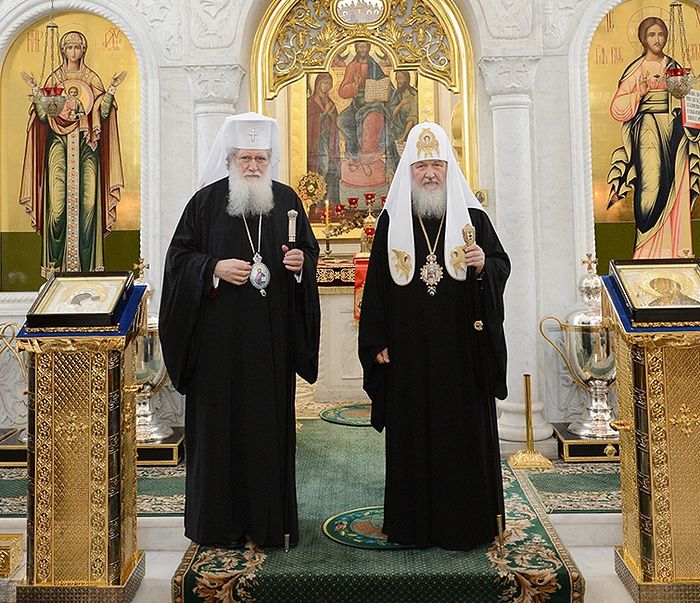 The delegation will also be accompanied by Archimandrite Phillip, representative of the Patriarch of Moscow and all Russia to the Bulgarian Patriarchate, and Mrs. Elisaveta Milenova, representative for Bulgaria of the International Foundation for the Unity of the Orthodox Peoples.

The ceremony will take place on March 9, in the Great Hall of Christ the Saviour Cathedral in Moscow. Patriarch Neophyte will receive the annual award of the International Foundation for the Unity of the Orthodox Peoples, together with His Excellency Mr. Tomislav Nikolić, president of Serbia, and Mr. Sergey Yevgenyevich Naryshkin, president of the State Duma of the Russian Federation. Former nominees of the award will also take part in the event: representatives of the State Duma, politicians, cultural and public figures of different Orthodox countries, such as former Bulgarian president Mr. Georgi Parvanov, and His Majesty King Simeon Borisov Saxe-Coburg-Gotha.

The two patriarchs, Kirill of Moscow and Neophyte of Bulgaria, will concelebrate on Tuesday, 8 March 2016, at the Monastery of the Protection of the Theotokos, where the relics of Blessed Matrona of Moscow are sheltered. After the Divine Liturgy, the two Primates will hold a Moleben Service (a service of supplication) in honour of the Bulgarian Saint Seraphim, Archbishop of Boguchar,recently canonized by the Bishops’ Council of the Russian Orthodox Church. H. M. King Simeon of Bulgaria will also attend the divine service.

An official meeting of the two primates of local Orthodox Churches is also expected to take place. On the agenda of the visit of His Beatitude Patriarch Neophyte, there are also scheduled visits to the headquarters of the International Foundation for the Unity of Orthodox Peoples, to the metochion of the Bulgarian Orthodox Church in Moscow, the Monastery of the Resurrection of the Lord – New Jerusalem, to the Kremlin and its churches: The Dormition of the Theotokos Church, where the relics of St. Cyprian, Metropolitan of Kiev and Moscow, are sheltered, and who was Bulgarian, as well as the churches of the Holy Archangels and of the Annunciation of the Theotokos. Russian Greetings to the Primate of Bulgarian Orthodox Church on his Name's Day
His Holiness Patriarch Kirill, Metropolitan Hilarion (Alfeyev) Sally Iloff3/8/2016 3:03 am
The Clergymen have more common sense than civil political elite of Bulgaria. What the president of Bulgaria and the prime minister cannot or do not du for both nations in this turbulent time the clergymen can do led by the Holy Spirit!
Blessed be the name of the Lord!
×