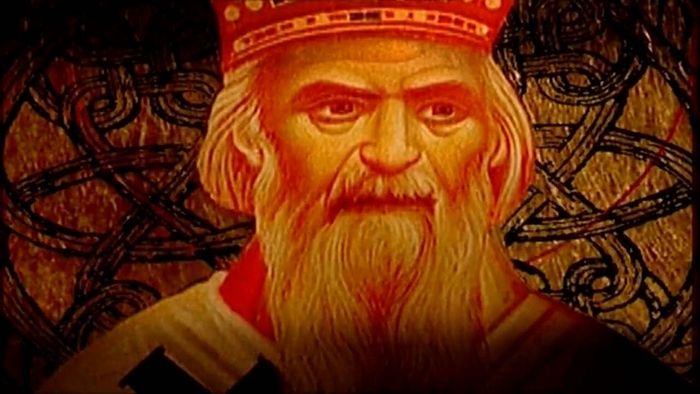 St. Nikolai Velimirovich, the great Serbian hierarch and theologian is also rightly considered an American saint, having served and reposed there. He was first sent to America in 1921 as the first Serbian missionary bishop, laboring there for two years before returning to Serbia, where he faced great persecutions during the time of World War II, including a time in the infamous Dachau concentration camp in Germany. Upon his released he again returned to Serbia but soon left for England. From England he returned to America in April 1946, where he was to remain until the end of his life, having reposed on March 5/18 1956.

Upon arriving in America, Bishop Nikolai spent his first few years there at the Serbian Cathedral in New York City, lectuing in many churches in the New York area (both Orthodox and non-Orthodox), as well as teaching at the Serbian Seminary in Libertyville, Illinois, from 1946 to 1949. Finally, in 1951, Bishop Nikolai came to St. Tikhon's Seminary first as a professor and finally, with the death of the former Rector, Bishop Jonah, as Rector of the Seminary Here he lived out the last years of his life as an example of humility, as well as an elder to the monastics at St. Tikhon's Monastery. To the students of the Seminary, the old Bishop was a loving father figure whom they would never forget. To the laity and faithful of the monastery parish, as well as all who came in contact with the Bishop, he was a hierarch in whom they saw manifest the grace of God. And to all, he was an example of humility. During his years as an educator at St. Tikhon's Seminary Bishop Nikolai was seen to be a very unusual person in that his courses were profoundly simple, informal and very warm. His requirements were very basic: he taught, you learned, and he corrected.

Perhaps one of the most striking characteristics of his classes was that he taught solely in the English language, at a time when very few courses were taught in that language (and these usually by outside lecturers). This often caused friction with other faculty members, but Bishop Nikolai held fast to his position, for he knew the importance, for the seminarians, of hearing lectures in their native language. Indeed, without this use of English, much of the subtlety of his teachings would have been lost from memory. The use of English extended even to the monastery church, and on most occasions he would preach in that language. Often the parishioners would complain about this, but his answer would be: You have learned and heard enough. Its time for [the seminarians] to learn something. 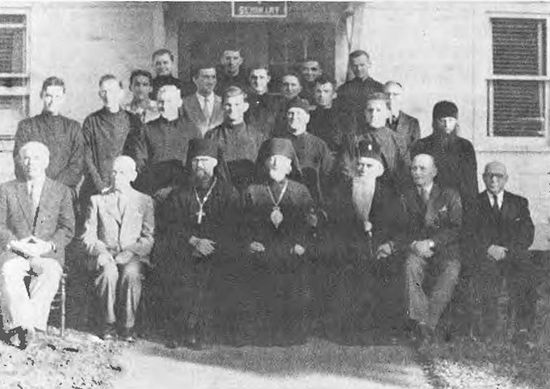 St. Nikolai with the rector, professors, and students of St. Tikhon's Seminary

Bishop Nikolai's classes, sermons and conversations were always geared to his audience, whether they be students, professors, theologians or simple parishioners, and his vocabulary never extended itself beyond the comprehension of his hearers. For him, class could be any time. Anything said to him could be turned around and assigned a deeper meaning. He would always take examples from conversations in class, at the dinner table, or that which occurred as he walked about the grounds, and would always introduce examples from Holy Scripture, relating them to life at hand. For example, one day in class a student mentioned the fact that it was such a terribly dismal day because of the rain. Bishop Nikolai walked over to the window, looked out, and expounded on the further dimensions of rain, from Noah until the present time: "What is rain? It is like Christ Who was also sent by the Father from Heaven to water a thirsty earth."

On Sunday, March 18, 1956, Bishop Nikolai fell asleep in the Lord. As related by the late Abbot Afanasy; The bishop served the Holy Liturgy on Saturday, March 17. Everything was unusually beautiful. Following the service, he went to the monks dining room. After a short talk, with a low bow, three times he humbly muttered, Forgive me, brothers, as he was leaving. This was something special, for he never did that before ... He frequently spoke about wanting to be buried here at St. Tikhon's Monastery; since he taught, prayed, and served God here. He had lived among the monks, and had said, 'It is more natural that I should be buried here. That Sunday morning, the late Fr. Vasily went down to Bishop Nikolais room at the Seminary and upon knocking at the door, received no answer. Opening it, he found the Bishop dead, stretched out on the floor in a kneeling position. In all probability, he had died between seven and eight that morning. The next day, a Memorial Service was served in the Monastery Church for the departed Hierarch by the Serbian Bishop Dionysius.

With deep humility and thankfulness for God's mercy; we fall down before our beloved Saint and Friend of God, crying out: Holy Hierarch Father Nikolai, pray unto God for us!

Originally published in the 1986 Tikhonaire—the yearbook of St. Tikhon's Seminary St. Tikhon of Moscow's Gift to America
The Monastery of St. Tikhon of Zadonsk
Jesse Dominick
St. Tikhon’s Monastery is home to a rich history and a great many “treasures” of Orthodoxy, some known, some relatively unknown, which stand as a testament to the prayers and labors of our American apostle, St. Tikhon, and his continuing heavenly protection.

Bishop Nikolai Velimirovich: Serbia's New Chrysostom
While the mere facts of Bishop Nikolai's life inspire awe, such a skeletal portrait does not explain his spiritual magnetism and the soul-penetrating power of his writings. These were the fruit of his life-long striving to know and to serve the Truth, which, in turn, kindled a habit of ceaseless prayer and a practiced consciousness of continually abiding in the presence of God. Serbian church to honor Gary-born St. Varnava
From his childhood in Gary to his death in Yugoslavia, St. Varnava always protected his faith and was dedicated to a Christian life. St. Varnava is the first American-born Serbian to be proclaimed an Orthodox saint, said the Rev. Thomas Kazich, who also is a Gary native.
Comments

John Tkachuk3/19/2016 5:59 am
Although I never had the grace of meeting Bishop Nikolai, I did have the good fortune of having a priest for a father (so I had the opportunity to go with him to various meetings, places, etc. including Serbian events/chutches (and since I spoke Russian, I could ynderstand 50 % most of the time).

Thanks for posting this, Doc!