Abbess of the Gorny Convent Igumena Georgia: 25 Years in the Holy Land

March 24 marked twenty-five years of service as the abbess of the Gorny Convent in Jerusalem for Igumena Georgia (Schukina), reports the site of the Russian Spiritual Mission in Jerusalem. 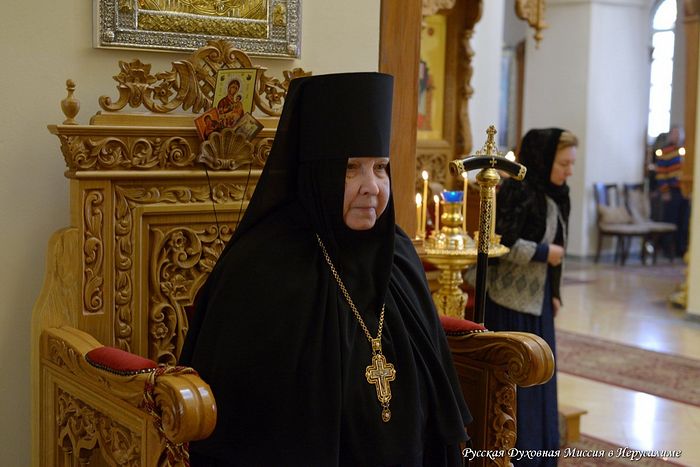 On March 25 the Liturgy of the Presanctified Gifts was celebrated by Archimandrite Alexander (Elisov), the head of the Russian Spiritual Mission, in the convent’s Cathedral of All Saints Who Have Shone Forth in the Russian Land, along with clergy of the monastery and other visiting clergy. Mother Igumena communed of the Holy Mysteries of Christ. 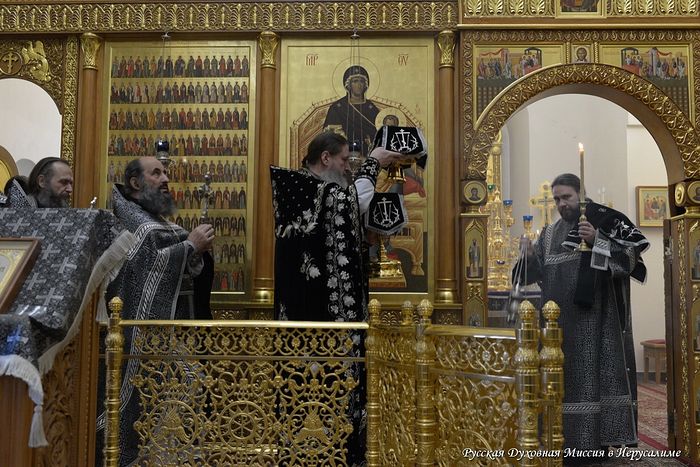 At the end of the service Archimandrite Alexander congratulated Igumena on behalf of His Holiness Patriarch Kirill of Moscow and All Russia, primate of the Russian Orthodox Church, who, in connection with this milestone of service to the Church of Christ, conferred upon her the Order of St. Euphrosyne of Moscow (First Class).

A celebration in honor of Igumena Georgia was held in the monastery trapeza during which the head of the mission presented her with a congratulatory address and bouquet of flowers from the clergy and nuns. 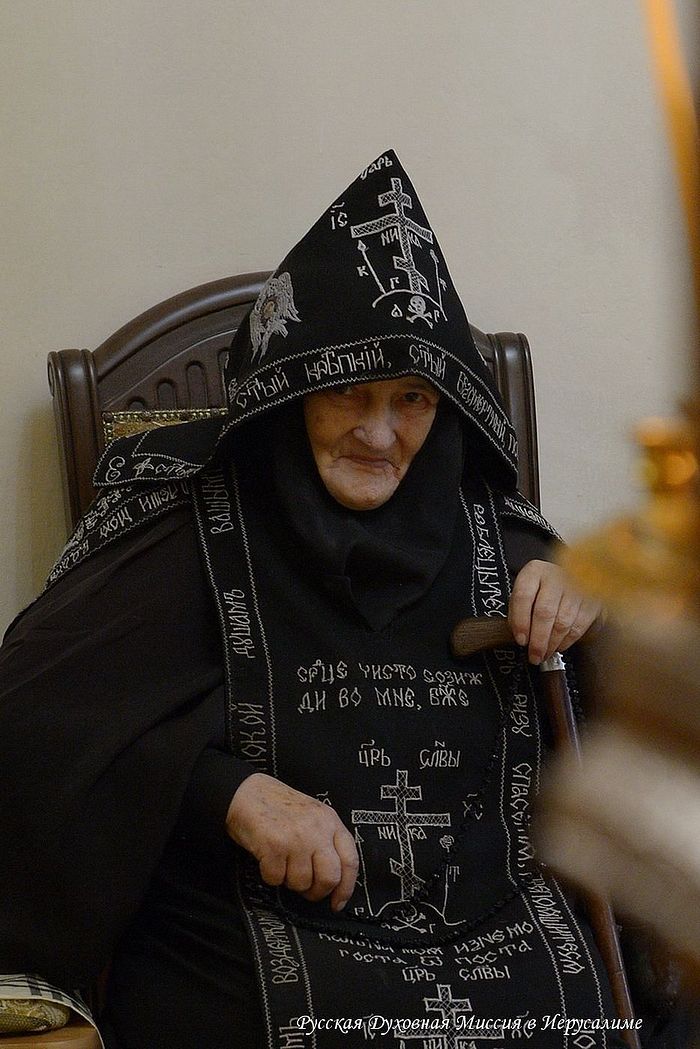 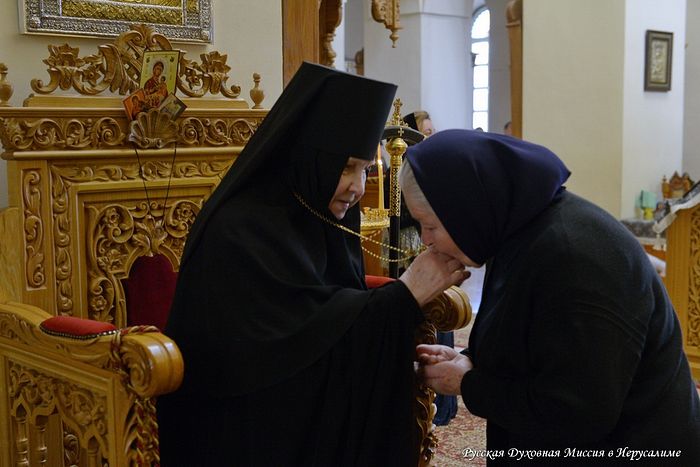 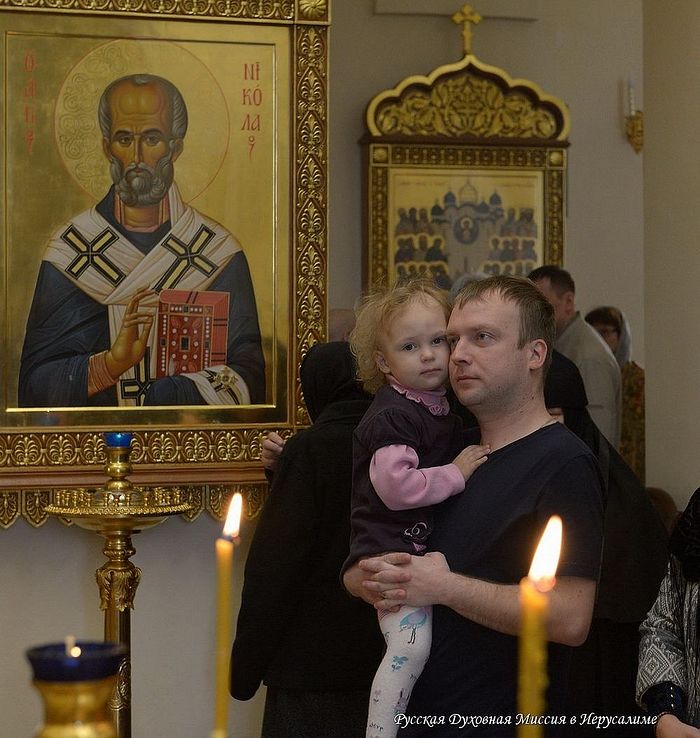 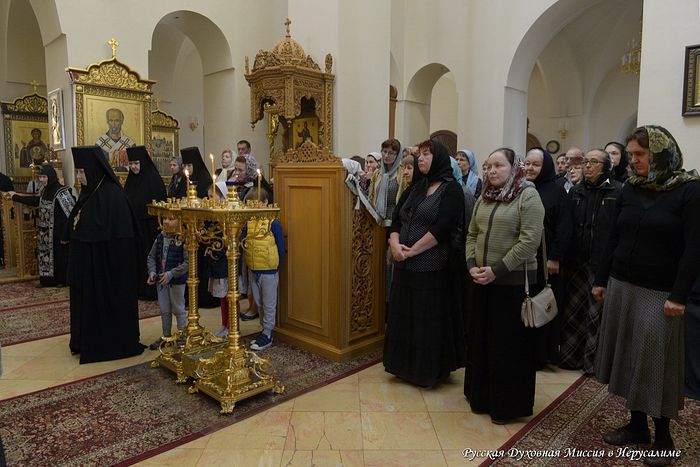 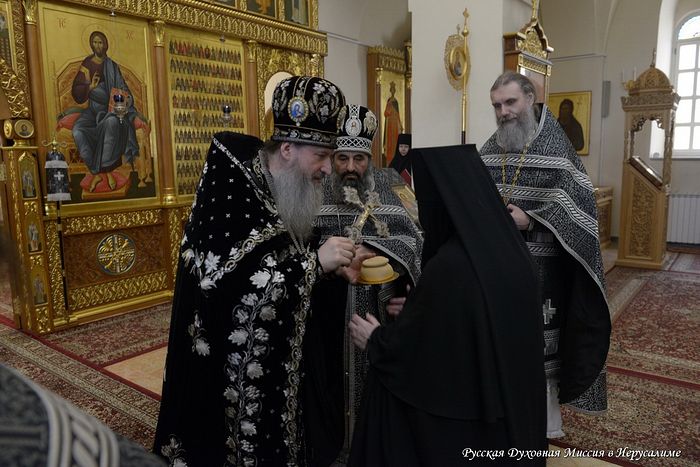 Igumena Georgia (in the world Valentina Schukina) was born on November 14, 1931 in Leningrad. During the Great Patriotic War she survived the blockade of the city and the loss of her parents. She worked from the age of fourteen: at first in the cafeteria at Finland Station, and then as a restorer in the Central Historical Archive.

In 1949 she entered the Holy Dormition-Pühtitsa Monastery, where she fulfilled the obediences of treasurer and choir director. From 1955 to 1968 she was a nun of the Vilnius Monastery in Lithuania.

She received the monastic tonsure on April 7, 1968 in Pühtitsa, where she labored until 1989.

In 1989 she was appointed to restore the Monastery of Righteous St. John of Kronstadt on Karpovka in St. Petersburg.

In 1991 His Holiness Patriarch Alexeii II of Moscow and All Russia appointed her the abbess of the Gorny Convent in Jerusalem.

On March 24, 1991 she was elevated to the rank of Igumena, and on March 27 together with a delegation of His Holiness the Patriarch she arrived to the place of her new obedience.

“Russian candle” begins to shine above Jerusalem
Reconstruction of the bell tower of the Russian Holy Ascension Convent in Jerusalem situated on the very summit of the Mountain of Olives (Mount Olivet) has been completed. The Presence of Russian Orthodox Church in the Arab world

The Presence of Russian Orthodox Church in the Arab world
As a result, the ROC to date acquired features of an influential factor in the world politics. ROC in the international arena watches over not only own interests, but also in the areas permitted by its Charter, represents the interests of countries as its canonical territory, that is where the church or any other Christian denominations can not operate without the consent of ecclesiastical authorities of the territory.
Comments

John11/27/2017 10:34 pm
Hi, thank you. I spoke with Sister Margalina at the Gornensky convent and she said that the person ho handles these type of question is away in Moscow and she will be back in about 2 weeks. So hopefully, there will be some information. My grandmother left some pictures of my family to the convent, do you think that they have kept them or thrown them out? Thank you.

John11/9/2017 9:14 pm
Hello, I'm trying to get some information of my great-grandfather, Vasily Adinietz (spelling could be Adiniets, Adinets or Adinetz) and his family. My grand-mother, Anna Vasilievna Adinietz and she was born on February 5, 1913, I believe in Poland and passed away on September 1, 1980. She was buried at the Gorny Russian Orthoddox Convent cemetary in Jerusalem. Anna had an aunt who was a nun at the Gorny Convent but no one knows her name. Also, no one seems to know the name of Anna's sister or her mother.

I'm trying to find out the history of my family, my grand-mother and her family. How do I get in contact with the Gorny Russian Orthodox Church? Thank you, John
e-mail: dalero1@yahoo.ca
×