The Holy and Great Council and the Hidden Work of God 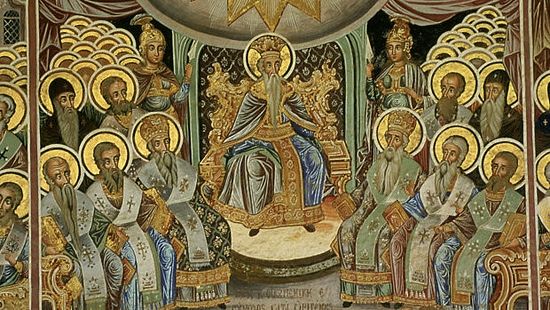 The science of psychology had its beginnings in the 19th century. It has since gone through many changes, complete with clinical science of the brain and its chemistry. However, in its earliest days it had something of a mystical twist. Freud, Jung and their cohort could see the surface of the personality and the various disorders it presented. Their instinct was that the causes of those disorders lay somewhere beneath the surface. In their varied approaches they sought to find a way beneath the surface and to create a roadmap of the human soul. They did not really succeed, but they asked very interesting questions. What they did manage to uncover was a hidden reality. Our urges, our dreams, our desires and so much else are often like a poetic wonderland, even when the images become frightening.

As a priest-confessor, you become privy to very dark secrets within other human beings. And those are only the stories of people seeking healing and forgiveness. One can only wonder at what things remain untouched, unrevealed, unacknowledged. Contemporary life presents a face of normalcy. That normalcy is often pointed to as an example of the stable world of secularism. “Everyday life,” “average,” “mundane,” “common,” are all part of our language that are used to describe the façade of our lives. But this is only a façade.

Beneath the normal is the “abnormal,” or, at least, what we would like to think is “abnormal.” Murderous thoughts, suicidal ideation, and every sexual depravity are actually quite common, lurking just beneath the surface of our public selves. The façade of our culture, and the “gentleman’s agreement” that has quietly supported, have shown great signs of weakening. With the cracks that have appeared, what lies beneath the surface also becomes more apparent, and in some cases begs to be admitted to the new normal.

It seems to me that the road map of normalcy, established as a middle class social standard, was always inadequate to describe human lives. It is not that some things are excluded from “normal” that should in fact be included, but that the concept of normal itself is inadequate. This is particularly the case from the perspective of the Orthodox Christian faith.

The modern notion of the secular, a sphere of life in which religion need play no part, is the ground on which the concept of normal was constructed. That ground itself is false, for there is no realm or space within all of creation that is not utterly dependent upon God and permeated with His life and presence. Sacred and secular are false distinctions. “The whole earth is full of Your glory.”

Gradually it was disclosed to me that the line separating good and evil passes not through states, nor between classes, nor between political parties either — but right through every human heart — and through all human hearts. This line shifts. Inside us, it oscillates with the years. And even within hearts overwhelmed by evil, one small bridgehead of good is retained. And even in the best of all hearts, there remains … an un-uprooted small corner of evil.

His observation is not unlike that of St. Macarius:

The heart itself is but a small vessel, yet dragons are there, and there are also lions; there are poisonous beasts and all the treasures of evil. But there too is God, the angels, the life and the kingdom, the light and the apostles, the heavenly cities and the treasuries of grace—all things are there.

If there is a true normal, it is deeply spiritual. It moves between transcendent good and a frightful evil. And the movement is not between people or classes or political persuasions, but within each human heart. We should not ignore what is going on around us. However, when we ignore the inner life of the heart, we remain unhealed and in the darkness.

The life of the Church in the world is not somehow separate from the life of every human heart. It is both the instrument of our healing and the arena of our salvation. Modern habits tend to over institutionalize our understanding of the Church, particularly when it comes to “comparative denominationalism.”

The mystery of the Church is the mystery of salvation, and, as such, it is the mystery of the battle in every human heart. It is the place where God “gathers together all things in one” (Eph 1:10). As he gathers all things together, He gathers both the wheat and the tares (Matt. 13). The Church is necessarily everything that belongs to our humanity – including our history. It is not unusual in conversations regarding the Church to hear complaints and observations about various failings throughout the centuries, as well as in our present circumstances. I often wonder what it is that people are expecting. Spinning myths about infallibility and demanding a pristine history are simply nonsense. Expecting leaders who will be without sin or weaknesses is equally absurd. God has not come to save us through such means.

For God made Him [Christ] who knew no sin to be sin for us, that we might become the righteousness of God in Him. (2 Cor. 5:21)

I believe that the Orthodox Church is the historical One, Holy, Catholic and Apostolic Church. But having said that, I do not expect it to have a tidier history than the messiness described in the pages of the New Testament. Those who want such tidiness mostly want to win arguments, not to find God. They cannot know God if they do not know themselves.

As the Holy and Great Council draws near, I am achingly aware of Orthodox short-comings. Contemporary Orthodoxy cannot be understood without reference to the near 500 years of the Turkish Yoke, nor the century of Communist domination. Neither are we free from the tidal pull of current world politics. What we witness at every turn is the working out of our salvation. On an international stage we may be sometimes be embarrassed or repulsed. That is the nature of the truth. The good and evil described by Solzhenitsyn will be discerned by many on the larger stage of the Great Council. And, doubtless, some will shout their discernment from the rooftops.

However, we are witnesses to the grace of God and the work of His goodness. We must know that all things work together for good for those who love God and are called according to His purpose. We must also know that the good work of God is often hidden and not made manifest immediately. It is His way.

Join me in prayers for the Holy Orthodox Church as it endures yet more trials in its life of union with the God who calls her His bride. There are no good things apart from the Cross of Christ. Give thanks always, for all things!

Holy Monasteries of Mt. Athos respond to documents prepared for Pan-Orthodox Council
As have several hierarchs, priests, and theologians especially from the Churches of Greece, Bulgaria, Georgia, and the Russian Orthodox Church Outside of Russia, the Athonite fathers have responded seriously and urgently, calling attention to several problems. The Curious Council
Archpriest Andrew Phillips
It can be concluded without hesitation that the Patriarchate of Constantinople is looking increasingly isolated from mainstream of the Orthodox Church and its Council project, at least in its old form, is looking increasingly in doubt. As has been said throughout Christian history: man proposes, but God disposes.
Comments