The Holy Spirit Comes Down as Fire on All People 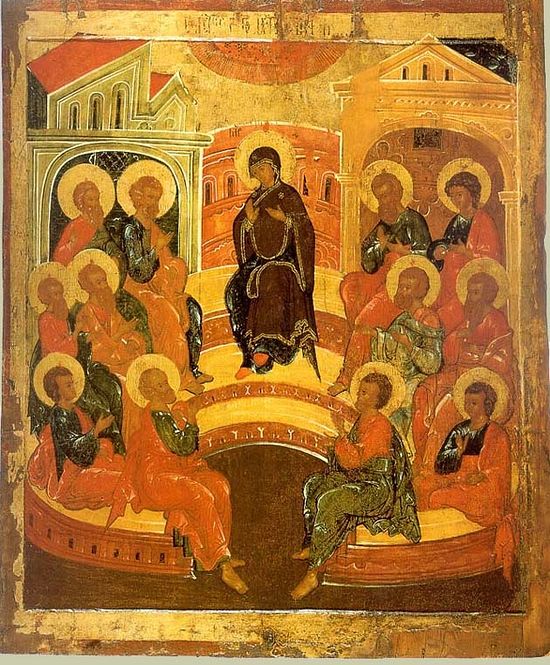 When the day of Pentecost had come, they were all together in one place. And suddenly a sound came from heaven like the rush of a mighty wind, and it filled all the house where they were sitting. And there appeared to them tongues as of fire, distributed and resting on each one of them. And they were all filled with the Holy Spirit and began to speak in other tongues, as the Spirit gave them utterance. Acts 2:1-4 Leave-Taking of the Ascension

Many of us are familiar with the Old Testament story of the Tower of Babel, as told in Genesis 11. We read in that account that all of the people of the earth had one language and few words. And they decided to come together to build a tower to the heavens. So, God descended on Babel and created languages, in order to confuse the people so that they could not build a tower to heaven. Because the way to heaven was not going to be a man-made tower, it was going to be our Lord Jesus Christ. The Tower of Babel marked the creation of all the languages of the world, and with the diversity of languages also came a division of peoples, for people only associated with those who spoke the same language.

In the time of Christ, there was a great division of languages and cultures. Jews and Samaritans did not like one another. No one liked the Romans. And Gentiles were considered barbarians by the Jews. So, when the Holy Spirit descended upon the Disciples on Pentecost, He gave them the ability to speak in all the languages of the earth. And all those who were gathered in Jerusalem heard the Good News of Christ in their own language.

At the time of the Ascension, when Jesus “commissioned” the Disciples to “baptize all nations,” (Matthew 28:16-20) they must have felt very inadequate when thinking about this daunting task. For not only would they need to travel to foreign lands and encounter foreign customs, but they would also have to be able to articulate the Gospel in foreign languages. The grace of the Holy Spirit, again defined as that which heals what is infirm and completes what is lacking, the Godly quality that makes ordinary extraordinary, empowered the simple fishermen to be able to speak in all the languages known to men. Not only were they able to utter words in these languages, they were able to speak with eloquence and conviction. Think about that. These men who had had doubts and fears throughout the earthly ministry of Christ, were not only enabled to speak in all the languages but to speak with such boldness and confidence that three thousand people converted to the faith on that very first day. (Acts 2:41) The Lord, who had once divided the nations at Babel, now through the Holy Spirit, united the world by allowing every person of every nation to hear the Gospel in his or her own language.

The other thing that the Spirit does is that it gives each of us a unique and special way to proclaim the Gospel. A few are called to be priests and serve the church as their life’s work. But it is not just the priests who are called to share the Gospel. Each of us has a talent to proclaim the Gospel. Some can do it as Sunday school teachers, others can sing in the choir, some can be greeters, and others can visit the sick. Any and all of us should cultivate the ability to pray for others and to pray with them. There are hundreds of way to express the Gospel.

As important as it is to cultivate our talents so that we can maintain a vocation, it is equally as important to cultivate our unique talent by which we further the message of the Gospel. And it is really important that we remember this as we prepare for our careers and as we advance in our careers. It is important that we also continually advance in our knowledge of the Gospel and of spiritual things, and it is important that we strive continually in ways large and small to advance the Gospel of Jesus Christ, guided by the Holy Spirit. None of us are likely to see tongues of fire on our heads, the way that the Holy Spirit came on the Apostles. But all of us have tongues of fire in our hearts, the light of the Holy Spirit burning in us. It is up to us to stoke the fire and spread the message. Come back tomorrow to learn the various languages of the Gospel and how to speak them.

When the Most High God came down and confused the tongues, He divided the nations. When He distributed the tongues of fire, He called all to unity. And with one voice we glorify the all-Holy Spirit. (Kontakion, Pentecost, Trans. by Fr. Seraphim Dedes)

Let the “fire” of the Holy Spirit burn in your heart and inspire your life today! Why We Don't Sense the Holy Spirit
Fr. James Guirguis

Why We Don't Sense the Holy Spirit
Fr. James Guirguis
The Holy Spirit is not some magical gift, but a personal encounter with the person of the Holy Spirit through His energies. The energies of God are given to us by His grace and not because we deserve them. Although this is the case, there are certain dispositions and attitudes that will allow God to magnify His grace within us. Sunday before Pentecost
Metropolitan Anthony of Sourozh
We also are called to learn the joy, the exhilarating, the wonderful joy of giving, of turning away from ourselves to be free to give, and of giving on all levels, the smallest things and the greatest things. On the Descent of the Holy Spirit
From the Homilies on the Acts of the Apostles
by St. John Chrysostom Homily I. Acts 1:1–2

On the Descent of the Holy Spirit
From the Homilies on the Acts of the Apostles by St. John Chrysostom Homily I. Acts 1:1–2
But why did the Holy Ghost come to them, not while Christ was present, nor even immediately after his departure, but, whereas Christ ascended on the fortieth day, the Spirit descended when the day of Pentecost, that is, the fiftieth, was fully come (Act. 2:1)? And how was it, if the Spirit had not yet come, that He said, Receive ye the Holy Ghost (Jn. 20:22)? In order to render them capable and meet for the reception of Him.