Demonic Possession as a Physical Ailment 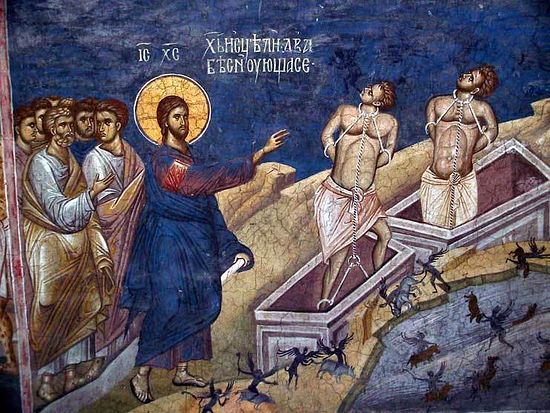 The Gospel lesson in our current lectionary for the 5th Sunday after Pentecost is Matthew 8:28-9:1 in which Christ encounters two men possessed by demons. At the time when the Orthodox Gospel lectionary was being formed, a story of Christ exorcising demons must have been very popular. For in the current lectionary, the parallel version of this story from Luke’s Gospel (8:26-39) is read also on the 21st Sunday after Pentecost. Since we have a lectionary that repeats every year, it is interesting that they thought this miracle important enough to proclaim twice during the church year in which there are only 52 Sundays, and we actually hear only 1/7 of the Gospels if we attend only on Sundays. The Luke version is slightly different than the Matthew version (one instead of two demoniacs), but both have a heard of pigs running over a cliff and all drowning. Here is the version from Matthew’s Gospel:

At that time, when Jesus came to the other side, to the country of the Gadarenes, two demoniacs met him, coming out of the tombs, so fierce that no one could pass that way. And behold, they cried out, “What have you to do with us, O Son of God? Have you come here to torment us before the time?” Now a herd of many swine was feeding at some distance from them. And the demons begged him, “If you cast us out, send us away into the herd of swine.” And he said to them, “Go.” So they came out and went into the swine; and behold, the whole herd rushed down the steep bank into the sea, and perished in the waters. The herdsmen fled, and going into the city they told everything, and what had happened to the demoniacs. And behold, all the city came out to meet Jesus; and when they saw him, they begged him to leave their   neighborhood. And getting into a boat he crossed over and came to his own city.

St. John Cassian provides precise indications as to how the devil acts in certain cases of possession and shows how this is analogous to certain processes due to physical causes. When an unclean spirit makes its way into those organs in which the soul’s vigor is contained, [it] imposes an unbearable and immeasurable weight on them, and overwhelms the intellectual faculties and deeply darkens their understanding. We see that this sometimes also happens through the fault of wine or fever or excessive cold or other unfavorable conditions that are externally caused. The devil, who had received power over the blessed Job’s flesh, did not succeed in bringing this upon him, having been forbidden by the command of the Lord, who said: ‘Behold, I hand him over to you; only spare his soul’ (Job 2:6). That is to say, only do not drive him mad by weakening his soul’s abode, and do not obscure the understanding and the wisdom of the one who withstands you by suffocating the governance of his heart with your weight (Mental Disorders and Spiritual Healing, p 48.).

A fascination with demons, even with exorcisms of demons, can itself be spiritually unhealthy. In the baptism exorcism, in one of the prayers the priest says, we show our utter contempt and disdain for Satan by referring to the Gospel lesson of the demoniac and the herd of swine:

Acknowledge the vanity of your might, which does not even have power over swine. Remember Him Who, at your request, commanded you to enter into the herd of swine.

We remind Satan in almost taunting fashion to remember the events at Gadara—we tell him to remember how powerless he was then and always continues to be in the face of Christ. Satan is not God’s opposite and equal, and has no power in himself. We who have been baptized can show our contempt for Satan by ignoring him—for sometimes in giving attention to satan we give power to him as well. But satan has been rendered powerless by Christ.

Larchet is pointing out that even the Patristic writers acknowledge that demon possession often has no other manifestation than symptoms related to physical diseases. Some of these symptoms of demon possession according to St. John Cassian really are the end result of drunkenness or a fever or even of unfavorable weather conditions. We do need to keep in mind that the Fathers of the Church did not attribute every human problem and ailment to demons.

Below is the entire prayer excerpted above—one of two prayers in the baptism service in which the priest directs his words/prayer to Satan: banning him from the catechumen who is about to be baptized and declaring Satan powerless because of Christ Jesus our Lord.

God, holy, awesome and glorious, Who is unsearchable and inscrutable in all His works and might, has foreordained for you the penalty of eternal punishment, O Devil. The same God, through us, His unworthy servant, commands you, with all your hosts, to depart from him (her) who has been newly sealed in the Name of our Lord Jesus Christ, our true God. Therefore I charge you, most crafty, impure, vile, loathsome and alien spirit, by the power of Jesus Christ, Who has all power, both in heaven and on earth, Who said to the deaf and dumb demon, “Come out of the man, and do not enter a second time into him:” Depart! Acknowledge the vanity of your might, which does not even have power over swine. Remember Him Who, at your request, commanded you to enter into the herd of swine. Fear God, by Whose decree the earth is established upon the waters; Who has made the heavens, and has set the mountains with a line and the valleys with a measure; and has fixed bounds to the sands of the sea, and a firm path upon the stormy waters; Who touches the mountains and they smoke; Who clothes Himself with light as with a garment; Who spreads out the heavens like a curtain; Who covers His exceedingly high places with the waters; Who has made the earth so sure upon its foundations, that it shall never be moved; Who gathers the water of the sea and pours it out upon the face of the whole earth: Leave, and depart from him (her) who has made himself (herself) ready for Holy Illumination. I charge you by the redeeming Passion of our Lord Jesus Christ, and by His precious Body and Blood, and by His awesome Second Coming; for He shall come quickly to judge the whole earth; and He shall chastise you and all your host with burning Gehenna, committing you to outer darkness, where the worm does not die and the fire is not quenched. Commentary on the Gospel about the healing of the gadarene demoniac
Newly-discovered texts
Metropolitan Anthony of Sourozh
After the death of Metropolitan Anthony of Sourozh, cassettes were found among his things, with talks on selected parts of the Gospel of St. Mark. We present to your attention one such talk, dedicated to the healing of the Gadarene demoniac.
Comments
×