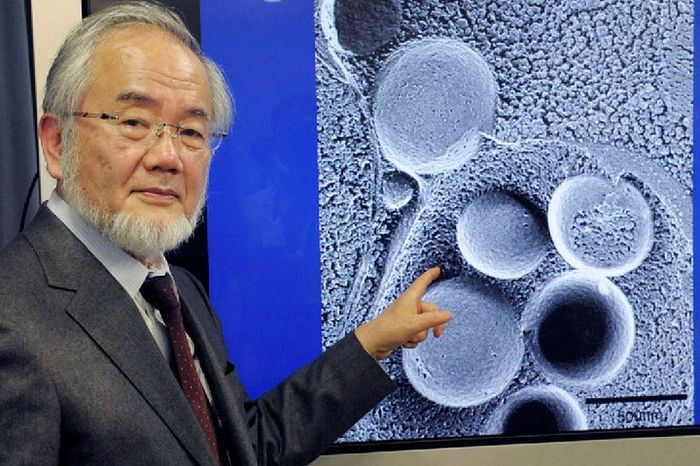 Yoshinori Ohsumi, a cellular biologist from Japan, became a Nobel Prize winner in physiology and medicine “for discovering the mechanisms of autophagy.” The Japanese scientist has scientifically substantiated that fasting is good for one’s health, reports the Komsomolskaya Pravda Russian newspaper.

Autophagy is the process of utilizing and recycling unnecessary or dysfunctional cellular components—the so-called cellular rubbish which accumulates in cells. The term “autophagy” originates from two Greek words which summarily mean “self-eating.” Autophagy is intrinsic to living organisms, including those of human beings. Thanks to autophagy cells get rid of excess parts, while an organism gets rid of unnecessary cells.

Autophagy becomes especially intensive when an organism is under stress, for example, when it fasts. In this case a cell produces energy using its internal resources, that is, cellular rubbish, including pathogenic bacteria.

The Nobel Prize winner’s discovery indicates that abstaining from food and keeping fasts is wholesome—the body truly cleans itself. This is confirmed by the Nobel Prize Committee.

According to Ohsumi’s colleagues, autophagy protects organisms from premature senility. This process even probably rejuvenates organisms by creating new cells, removing defective proteins and damaged intracellular organelles from them, thus maintaining them in good condition. Fasting, The Orthodox Christian Way
Essentially, this discipline of fasting, by simply controlling what goes into our mouth, provides us with the means to approach the ultimate goal and participate in the holiness of God. The tradition of the Orthodox Church shows us the whole person of body and soul is involved, in a spiritual and total commitment to God.

On Fasting Again
Archpriest Oleg Stenyayev
To those on the new style calendar who are celebrating the Nativity of Christ, we wish all a joyous feast. Please keep this delightful article on fasting in mind for Wednesdays and Fridays, and the other three extended fast periods. But for those who are still observing the Nativity fast, may these instructions encourage you during this final stretch.
Comments

Bipul Karim9/3/2019 7:02 pm
Sir, It's a great honour that you proved and showed a new way of better life. My humble request is how often of fasting is necessary and beneficial to our health. Previously I experienced once in a week fasting. It makes me fit and energetic. Kindly inform me.. Bipul Karim, West Bengal, India.

surya2/15/2019 1:47 pm
One my colleague at Hyderabad(India)had under went surgery and chemotherapy for colon cancer. Now he is suffering with liver cirrhosis and treating doctor said that he needs liver transplantation which may cost about Indian rupees 25lakhs . Since he is a financially poor he is not in a position to afford the medical expenses for the liver transplantation. he have no other way except praying the God. He has just kept faith in the Lord Jesus and praying for miracle. If this intermittent fasting can work for him for his recovery from illness of liver cirrhosis,please suggest the detailed method of fasting.

Dougie Knight1/23/2019 10:36 pm
I survived a medically incurable condition with the help and advice of a naturopath. He recommended a diet of green salad and a small glass of unpasteurised yoghourt taken three times daily. This was followed every three weeks by 48hr fasts without food or liquid.. Within six months I recovered. The following year I won the Belfast Singles Table-tennis Championships The medical doctor who told me that my condition was medically incurable heard that I was making progress, and phoned to ask if I would mind if he monitored my progress. He assured me that he in no way would interfere. Three or four months later he declared that I was out of danger and on the way back to full health.

Ponsi11/23/2016 7:19 pm
How is his finding apply to Christian way of fasting VS Buddhist way of fasting, no solid food intake after 12pm until after sunrise? How often should you practice this fasting Med god? Or should it become a daily habit?

Ivan10/24/2016 2:56 am
Marie, you should eat nothing except water (tea and coffee without sugar and milk - ok) for 12 hours to benefit from autophagy. 16 hours is optimal. E.g. you can skip your diner (fasting from 16h to 8h) or breakfast (fasting from 21h to 13h), and so on. And the rest of time you should eat enough. Finally you will eat the same amount of food, with the same normal calorie intake and nutruent proportions, but modified timing. This regimen have nothing in common with modern orthodox fasting, it's more like ancient eastern tradition.
Just google for intermittent fasting :) or read this article for example: https://authoritynutrition.com/intermittent-fasting-guide/

Marie10/6/2016 4:28 pm
I am curious about what level of fasting enables this process- complete abstinence from food for a few days or simply eating a more restricted diet some days of the week?
×