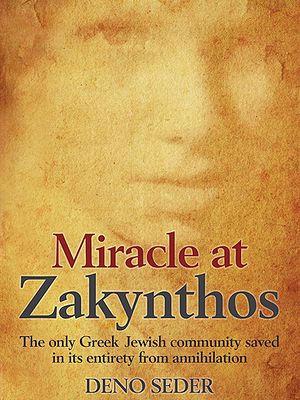 Nearly ninety percent of Greek Jews perished during the Holocaust. Most were killed at Auschwitz/Birkenau.

But on the Ionian island of Zakynthos, the entire Greek Jewish community was saved from annihilation. The German commander on Zakynthos, Alfredo Litt, a vile, treacherous man, ordered the island’s Bishop Chrysostomos and Mayor Loukas Carrer to prepare a list of all the Jews on the island.

He gave them 72 hours to deliver the list. What happened next was a series of remarkable and historic acts of human courage, compassion and cunning. The story illuminates the humanity of a people who risked their lives to save their neighbors.

The book, Miracle on Zakynthos, written by a Greek American author named Deno Seder, documents many of the horrors and atrocities during the occupation in Greece and then takes the reader on a journey high into the remote mountain villages of Zakynthos where Greek Christians hid their Jewish neighbors to protect them from certain death.

It recounts the many acts of human kindness and compassion, large and small, that restored faith in mankind and renewed hope for survival.

Seder stumbled upon the story almost by accident when he was accompanying his wife on a trip to Israel, where she was preparing an exhibition at Yad Vashem, the Holocaust Memorial and Museum.

“There, in the memorial park, I stumbled upon the names of the Greek Orthodox Metropolitan of Zakynthos, and the island’s mayor and was intrigued by the story.”

Seder researched for two years, interviewing survivors and visiting the island where he traveled to remote mountain villages to hear first-hand testimonies from those who saved Jews.

Rabbi Meyer H. May, the Executive Director of the Simon Wiesenthal Center praised the book and called out the people of Zakynthos for their “rarified example of humanity in the face of tyranny that will inspire for generations.”

“Wondrous tales of noble heroism and self sacrifice have sometimes pierced the evil of the Holocaust, but few are more compelling than the heroism of the Greek Christians of Zakynthos. Led by their Bishop and Mayor, these ‘ordinary people’ hid their Jewish neighbors and saved them from certain death at the hands of their German Occupiers. The people of Zakynthos have set a rarified example of humanity in the face of tyranny that will inspire for generations. Deno Seder has performed a great service to history by his riveting work and careful research.” –Rabbi Meyer H. May, the Executive Director of the Simon Wiesenthal Center

“In this well-researched and documented collection of firsthand accounts and historical texts, we witness the great spiritual stature of our not-so-distant forebears. Today, nearly seventy years after the liberation of Greece from German occupation, this book continues to serve as a painful, albeit powerful reminder of the intrepid bravery shown by the Hierarchs, Priests and Greek people in the face of inhumane threats against their Jewish neighbors in Greece. It is our prayer that this book will inspire and provide hope in our day, just as the actions of the islanders and the resulting salvation from death of the Greek Jewish population of Zakynthos bolstered the spirits of the Greek people in those dark and difficult times.” - His All Holiness the Ecumenical Patriarch Bartholomew On This Day March 3, 1891: Greece’s Wartime Archbishop Damaskinos is Born

On This Day March 3, 1891: Greece’s Wartime Archbishop Damaskinos is Born
His famously defiant response to the Nazi, when he was threatened with death by firing squad, has gone down in history. “It is the tradition of the Greek Orthodox Church that its hierarchs are hung, not shot,” he said. Russia makes Nazi revisionism a crime
The Russian Federation’s president Vladimir Putin has signed a law which introduces a penalty up to five years of imprisonment for rehabilitation of Nazism, denial of the facts recognized by the judgment of the Nuremberg trial, and spreading false information about USSR activities during the World War II.
×