St Gregory the Wonderworker of Neocaesarea 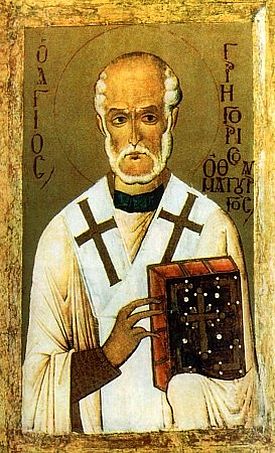 Saint Gregory the Wonderworker, Bishop of Neocaesarea, was born in the city of Neocaesarea (northern Asia Minor) into a pagan family. Having received a fine education, from his youth he strived for Truth, but the thinkers of antiquity were not able to quench his thirst for knowledge. Truth was revealed to him only in the Holy Gospel, and the youth became a Christian.

For the continuation of his studies St Gregory went to Alexandria, known then as a center for pagan and Christian learning. The youth, eager for knowledge, went to the Alexandrian Catechetical School, where the presbyter Origen taught. Origen was a famous teacher, possessing a great strength of mind and profound knowledge. St Gregory became a student of Origen. Afterwards, the saint wrote about his mentor: “This man received from God a sublime gift, to be an interpreter of the Word of God for people, to apprehend the Word of God, as God Himself did use it, and to explain it to people, insofar as they were able to understand it.” St Gregory studied for eight years with Origen, and was baptized by him.

The ascetic life of St Gregory, his continence, purity and lack of covetousness aroused envy among his conceited and sin-loving peers, pagans that they were, and they decided to slander St Gregory. Once, when he was conversing with philosophers and teachers in the city square, a notorious harlot came up to him and demanded payment for the sin he had supposedly committed with her. At first St Gregory gently remonstrated with her, saying that she perhaps mistook him for someone else. But the profligate woman would not be quieted. He then asked a friend to give her the money. Just as the woman took the unjust payment, she immediately fell to the ground in a demonic fit, and the fraud became evident. St Gregory said a prayer over her, and the devil left her. This was the beginning of St Gregory’s miracles.

Having returned to Neocaesarea, the saint fled from the worldly affairs into which influential townsmen persistently sought to push him. He went into the desert, where by fasting and prayer he attained to high spiritual accomplishment and the gifts of clairvoyance and prophecy. St Gregory loved life in the wilderness and wanted to remain in solitude until the end of his days, but the Lord willed otherwise.

The bishop of the Cappadocian city of Amasea, Thedimos, having learned of St Gregory’s ascetic life, decided to have him made Bishop of Neocaesarea. But having foreseen in spirit the intent of Bishop Thedimos, the saint hid himself from the messengers of the bishop who were entrusted to find him. Then Bishop Thedimos ordained the absent saint as Bishop of Neocaesarea, beseeching the Lord that He Himself would sanctify the unusual ordination. St Gregory perceived the extraordinary event as a manifestation of the will of God and he did not dare to protest. This episode in the life of St Gregory was recorded by St Gregory of Nyssa (January 10). He relates that St Gregory of Neocaesarea received the episcopal dignity only after Bishop Thedimos of Amasea performed all the canonical rites over him.

During this time, the heresy of Sabellius and Paul of Samosata began to spread. They taught falsely concerning the Holy Trinity. St Gregory prayed fervently and diligently imploring God and His most pure Mother to reveal to him the true faith. The All-Holy Virgin Mary appeared to him, radiant like the sun, and with Her was the Apostle John the Theologian dressed in archepiscopal vestments.

By the command of the Mother of God, the Apostle John taught the saint how to correctly and properly confess the Mystery of the Most Holy Trinity. St Gregory wrote down everything that St John the Theologian revealed to him. The Mystery of the Symbol of the Faith, written down by St Gregory of Neocaesarea, is a great divine revelation in the history of the Church. The teaching about the Holy Trinity in Orthodox Theology is based on it. Subsequently it was used by the holy Fathers of the Church: Basil the Great, Gregory the Theologian, and Gregory of Nyssa. The Symbol of St Gregory of Neocaesarea was later examined and affirmed in the year 325 by the First Ecumenical Council, showing his enduring significance for Orthodoxy.

Having become a bishop, St Gregory set off to Neocaesarea. Along the way from Amasea he expelled devils from a pagan temple, the priest of which he converted to Christ. The convert was witness to still another miracle of the saint, at his word a large stone shifted from its place.

The preaching of the saint was direct, lively and fruitful. He taught and worked miracles in the name of Christ: he healed the sick, he helped the needy, he settled quarrels and complaints. Two brothers sharing an inheritance were not able to agree over the property of their dead father. There was a large lake over which they argued, for each of the brothers wanted the lake for himself. They both gathered their friends together, and were ready to come to blows. St Gregory persuaded them to delay their fight until the following day, and he himself prayed all night long at the shore of the lake which sparked the quarrel. When dawn broke, everyone saw that the lake had dried up or gone underground. Through the intense prayer of the saint, now there was only a stream, and its course defined the boundary line. Another time, during the construction of a church, he commanded a hill to move and make room at the place of the foundation.

When a persecution against Christians began under the emperor Decius (249-251), St Gregory led his flock to a faraway mountain. A certain pagan, knowing about the hiding place of the Christians, informed the persecutors. Soldiers surrounded the mountain. The saint went out into an open place, raised up his hands to heaven and ordered to his deacon to do the same. The soldiers searched the whole mountain, and they went several times right past those praying, but not seeing them, they gave up and went away. In the city they reported that there was nowhere to hide on the mountain: no one was there, and only two trees stood beside each other. The informer was struck with amazement, he repented of his ways and became a fervent Christian.

St Gregory returned to Neocaesarea after the end of the persecution. By his blessing church Feasts were established in honor of the martyrs who had suffered for Christ.

By his saintly life, his effective preaching, working of miracles and graced guiding of his flock, the saint steadily increased the number of converts to Christ. When St Gregory first ascended his cathedra, there were only seventeen Christians in Neocaesarea. At his death, only seventeen pagans remained in the city.

You became worthy of your name through your way of life: / through your vigilance in prayer and your constant works of mercy. / Therefore, O Father Gregory, beseech Christ God to enlighten our minds, / that we may not sleep in sin, which leads to death!

You received the power to perform miracles, / frightening the devils and healing the sick through your wonderworking. / All-wise Father Gregory, / your deeds truly entitle you to be called “Wonderworker”! First Homily on the Annunciation to the Holy Virgin Mary
St. Gregory of Neo-Caesarea

First Homily on the Annunciation to the Holy Virgin Mary
St. Gregory of Neo-Caesarea
Today are strains of praise sung joyfully by the choir of angels, and the light of the advent of Christ shines brightly upon the faithful.Today is the glad spring-time to us, and Christ the Sun of righteousness has beamed with clear light around us, and has illumined the minds of the faithful. Today the grace of God and the hope of the unseen shine through all wonders transcending imagination, and make the mystery that was kept hid from eternity plainly discernible to us.
Comments
×