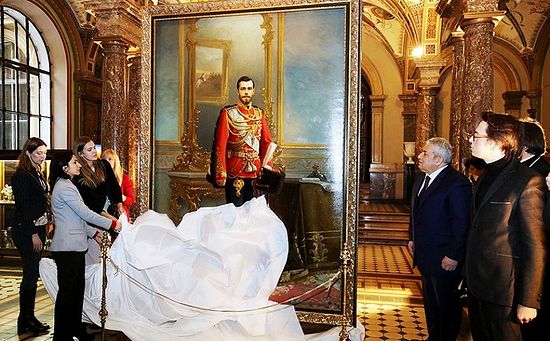 Historical justice is done, a portrait of Emperor Nicholas II - by the Russian artist Ilya Savich Galkin (1860-1915) - hidden from human eyes for some ninety-odd years - was presented at the St. Petersburg Museum of Applied Arts on November 30th.

The restoration which took three years to complete, was initiated by the staff and students of the department of painting and restoration of the Stieglitz State Academy of Art and Design under Professor Tatiana Potselueva.

The story of this unique painting attracted the interest of the Russian media, as well as specialists in the field of painting. They believe that the history of these portraits is both mysterious as mystical, symbolizing both the tragedy and the greatness of the country's history at a time of great change and upheaval.

In 1896, Ilya Galkin was appointed Court painter. The young artist painted a portrait of Nicholas II in the year of his coronation. The emperor appears in all his glory - in dress uniform, set against the background of a palace interior. The portrait was painted under the order for the Petrovsky Commercial College, which during Soviet times became school No. 206.

During the upheaval of the 1917 Revolution, to which Galkin did not live to witness, the disappearance of the portrait went unnoticed. As it turned out, the portrait of Nicholas II did not disappear, it was merely hidden, thanks to the efforts of artist Vladislav Izmailovich Before the revolution, the artist painted the grand palaces, but after the Revolution, he was ordered to paint a portrait of Lenin. Unbeknownst to Lenin or any one else at the time, the artist utilized the other side of the canvas which depicted Nicholas II. Izmailovich’s initiative in fact saved Galkin’s portrait of Russia’s last emperor. For the next 90 years, the back-to-back portraits hung in the hall of school No. 206 in Leningrad, but only that of Lenin. 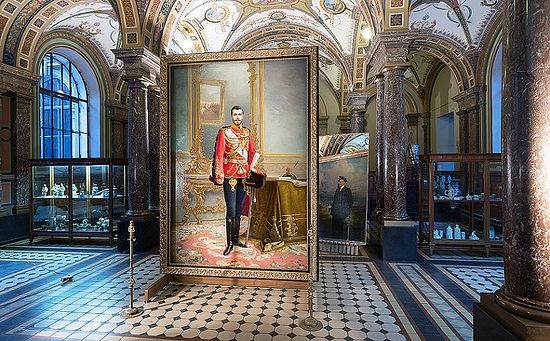 Professor Tatiana Potselueva, engaged students of the Academy in the restoration of the portrait. These young artists took great pride and honour by participating in this historic event. Now that their work is complete, the question now, is what will the Academy do with the portraits?

Rector of the Academy Stieglitz Vasily Kichedzhi, notes that this painting requires special storage conditions and should be put on display in a large museum. In addition, he notes that the portrait has always been the property of the state and should continue to belong to the state.

“It is not just a picture, it is - the personification of the history of the country and the state” - said Kichedzhi. The rector wrote a letter to the Minister of Education and Minister of Culture with a request to determine the future fate of the picture.

In the meantime, a number of prominent museums have expressed an interest in the portrait of Emperor Nicholas II. Among those is the Director of the Tsarskoye Selo State Museum Preserve Olga Taratynova, who believes that the panting should be displayed in the Alexander Palace, which will reopen as a multi-museum complex in July 2018.

The Museum of Political History in St. Petersburg, is believed to be a perfect venue to display the portrait of Lenin.

While the fate of both portraits is being decided, visitors to St. Petersburg can view the portraits of Emperor Nicholas II and Vladimir Lenin at the Stieglitz Applied Arts Museum in St Petersburg, from December 1st.

David Szцllsi Vengrija/Budapest12/4/2016 2:27 am
Should be displayed at the L'Hermitage in StPeterburg and let it be back-to-back forever as a memento in the middle of a large hall for circumwalking...
×