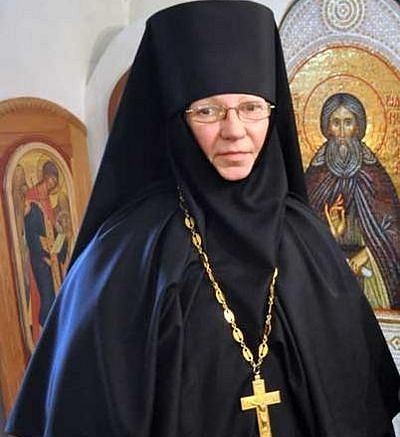 On the night of January 5, the abbess of the Monastery of St. Xenia (in the Borisovo region of Minsk province, Belorus) Mother Vasilisa (Medved) was murdered, reports Sputnik.by.

The press secretary of the Belorussian exarchate (of the Russian Orthodox Church) Fr. Sergei Lepin commented on the incident, “I can confirm that Matushka Vasilisa was murdered. Mostly likely, the attacker was one of the [psychologically] ill residents, of which there are many in the monastery.” The local law enforcement agencies confirmed this fact, but have not released details.

“We are in great sorrow, such sorrow on the eve of the feast. Matushka was killed that night. I can’t say anything more,” one nun from the convent told the Sputnik news agency over the telephone. In her words, the law enforcement agencies are at work in the monastery and the assailant has been arrested. Later reports have determined that the mentally ill woman was a citizen of Belorus, but was originally from Kazakhstan.

Abbess Vasilisa (Medved) was born March 10, 1949 in the Ukraine. After graduating from the department of history of the Chernigov Institute for Educational Studies, she became a schoolteacher. She was a parishioner of the Sts. Peter and Paul Cathedral in the Belorussian capital, and after receiving an education with the St. Elizabeth sisterhood she became a sister of mercy. In 2001 she became a novice at the St. Elizabeth Convent. In 2002, at the blessing of Metropolitan Philaret of Minsk and Slutzk, she became the abbess of the St. Xenia Convent in the village of Baran, outside of Minsk.

Chaim Y. Levi2/20/2017 11:26 pm
Maybe is a muslim from Kazakhstan!
They are the servants of the antichrist and want to destroy the righteous...

Matushka Elizabeth1/9/2017 4:18 am
Memory Eternal. We recently hosted(in the US) a sister from the main convent - what magnificent work thousands of lay people are doing to serve those in need.

Bee1/9/2017 4:06 am
It sounds to me as if now the monasteries are being infiltrated by Muslims posing as those interested in monastic life. Please, be wary of individuals who may be wolves in sheep's attire.

S Hodges1/8/2017 8:31 am
Community resources for the mentally ill are scarce in the US, patient rights trump common sense, and involuntary treatment is non existent outside the criminal justice system. Mother Vasilisa worked in Belarus, but God bless her for working with the mentally ill.

Ann South1/8/2017 5:36 am
Memory Eternal, Mother. May your kindness and love be always remembered.

Caliope Kamenos 1/8/2017 2:48 am
Truly an unbelievable tragedy! May her memory be eternal

Constantine Menoutis1/7/2017 10:12 pm
May The lord carry her into our eternal father's arms in heaven

Joanna1/7/2017 8:57 pm
My hear breaks for the death of this holy person who devoted herself to God May her soul rest in peace and her memory be eternal
×