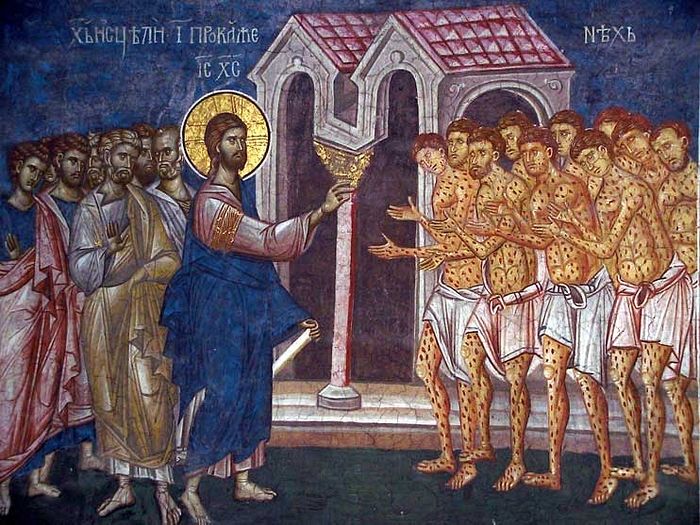 Today we hear the passage about the ten lepers from St. Luke the evangelist. When a man or woman was found out to be leprous, this was considered something of a death sentence. This sickness would separate people from their loved ones. It would force families and communities to distance themselves and push those who had the disease outside the city walls. Lepers were known to dwell together and travel together since they could not be around those who were healthy due to being contagious and unclean.

The ten lepers stood at a distance and we are told that they lifted up their voices and said “Jesus, Master, have mercy on us.” It reminds me of the time I visited a chaplain in a local liberal arts college. I walked into his office and found that there were many peculiar decorations including a large poster with a picture of Our Lord that read “Jesus is my homeboy.” Brothers and sisters, Jesus cannot be your homeboy. We learn to address the Son of God in a worthy manner and not with such casual titles. And this is not a trivial point because how we address others is a sign of how we actually love and respect and show reverence to them or quite possibly it is a sign of our lack of love and respect and reverence. Whatever we believe is apparent in the ways that we speak of God, or in the ways that we speak to God.

Here we are confronted with the ten lepers and we see their reverence. Why did they have such reverence? Perhaps because they had no hope left and the Lord Jesus became their only real source of hope for them in their despair. When the Lord heard them say “Jesus, Master, haver mercy on us”, He said to them “Go and show yourselves to the priests.” We are consistently awed by the power of God and by the power of His word. By His word He made the heavens and the earth and created light. By His word He now grants new life to the ten who were like the walking dead. We are told that as they went to see the priests they were cleansed. It is truly remarkable! A disease is healed by the word of the Word. Yet something even more remarkable is about to happen. Ten lepers were cleansed but only one turned back and offered praise to God and came to fall at the feet of Jesus to offer thanks.

The Lord Himself took the opportunity of the lepers return to point out a few things to us. He asked “Were not ten cleansed? Where are the nine?” There is an expectation that the right number of lepers that should’ve returned to give thanks to God was 10 out of 10. There should have been gratitude from 100% of the lepers. Their life was given back to them and they went off on their merry way without so much as a thought of gratitude for the One who had made all things possible for them. This isn’t because God wants us to feel guilty, it is because God wants to help us understand reality and act in a truly human manner. One who is truly human cannot deny his need for God’s help for even a minute of his life. Gratitude is a sign that one is truly aware of what his life was, what his life is and what God has done and continues to do for him.

Our Lord continues by asking “Was no one found to return and give praise to God except this foreigner?” One of the inescapable facts of the gospel according to St. Luke is the way that those who are outsiders, non-Jews are constantly shown to be more faithful than the Jews who supposedly know God. The one who reads the gospels is faced with this reality and it is important that we all understand that this reality is sometimes true for us as Orthodox Christians. We have been handed the full deposit of the faith through faithful men and women. We have the full knowledge of the truth about God and His Son. It may also be true that there are some, perhaps they are Protestants or Roman catholics who lack a portion of the knowledge and yet have a better actual understanding of God which is demonstrated by their faithfulness, even in the little things, even in the seemingly unimportant act of gratitude. The only one who came back to show his gratitude for the miracle that Christ had performed was the Samaritan. The Jews looked on Samaritans as if they were no better than dirt. Yet the one who is considered less than human, was the only true human among the bunch because he recognized the source of his blessings. The gospels continually point to the fact that those who have the privilege of knowing God are expected to live up to this privilege through their piety and devotion. But I want to repeat that this is not about making God happy, it is about fulfilling our purpose and finding our peace in the Lord.

St. Mark the ascetic wrote “You should continually and unceasingly call to mind all the blessings which God in His love has bestowed on you in the past, and still bestows for the salvation of your soul. You must not let forgetfulness of evil or laziness make you grow unmindful of these many and great blessings, and so pass the rest of your life uselessly and ungratefully. For this kind of continual recollection, pricking the heart like a spur, moves it constantly to confession and humility, to thanksgiving with a contrite soul, and to all forms of sincere effort, repaying God through its virtue and holiness. In this way the heart meditates constantly and conscientiously on the words from the Psalms: ‘What shall I give to the Lord in return for all His benefits towards me?’ (Psalm 116:12).” Letter to Nicolas the Solitary, The Philokalia Vol. 1

True gratitude leads to the complete sacrifice of oneself through total obedience to the teachings of Christ….and it leads us to true worship of the living God. We thank God for the faith of this Samaritan and outsider who not only found physical healing but through his mindfulness and the offering of thanks to God, also found wellness for his soul. And glory be to God forever AMEN. Enmity, Discernment
Fr. Ted Bobosh
Christ’s Gospel commandments are hard. Sometimes they seem obscure, for how can we do them? Is it humanly possible? Twenty-ninth Sunday after Pentecost: The Healing of the Ten Lepers
Luke 17:12-19
Blessed Theophylact of Ochrid
From this one may learn that nothing prevents a man from living in a manner pleasing to God, not even if he belongs to a despised race, if only he has a good will and disposition. The Gospel in the Church
Archbishop Nikon (Rklitsky)
The quiet wind of heavenly life blows within Christ’s Church. Through her is established a connection to the World on High, and mystical contact with eternity. In her is defeated death, which becomes a rest from labors and a portal to "the best and most useful." Nevertheless, the majority of people, blinded by the sorry trumpery of life, does not notice the mystical spiritual life in the Church and cannot draw from her that water of life, about which the Lord said that those who drink of it shall never thirst; that is, they will receive complete spiritual fulfillment.
Comments
×