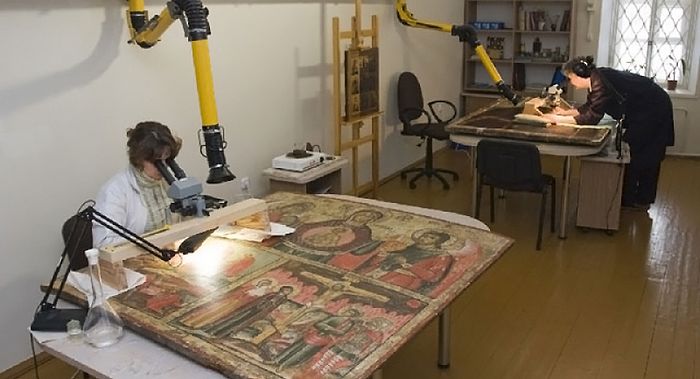 The fourteenth century ”Mother of God Enthroned” fresco, restored from its various parts, is to be returned to St. Sophia’s Cathedral in the Novgorod Kremlin, reports TASS.

The uniqueness of the fresco’s restoration, according to Novgorod museum-reserve director Natalia Grigorieva, consists in that experts gathered its pieces literally from debris, covered in seventeenth century plaster.

“Scientists discovered the fresco fragments during excavations,” first in 1956, then in the 1990s during restoration of the cathedral she explained. The “Mother of God Enthroned” icon, presumably dating to 1466, depicts the Mother of God seated on a throne with the Christ Child, flanked by the archangels Michael and Gabriel.

The museum director clarified that the fresco will be returned to a pillar in the cathedral in 2017, in coordination with the Russian Ministry of Culture and with the blessing of Metropolitan Lev of Novgorod and Staraya Russa.

“The image is very beautiful and expressive, painted with the traditional colors of that time: the Mother of God in a blue coif and tunic of the same color with white trimming, and a bright blue background. The archangels in ochre, here characterized by fine detail, right down to the fingernails,” stated artist-restorer Tatiana Romashkevich. Relics of St. Anthony the Roman discovered and identified in Veliky Novgorod

Relics of St. Anthony the Roman discovered and identified in Veliky Novgorod
According to tradition, St. Anthony, a Roman citizen, miraculously sailed on a stone from Rome to Veliky Novgorod by the river Volkhov in 1106. In the same year St. Anthony founded Nativity Monastery in Veliky Novgorod. Afterwards the monastery was named after its founder: St. Anthony’s (or “Antoniev”) Monastery. Now it is one of the oldest surviving monasteries in Russia. St. Sophia’s Divine Wisdom over Novgorod
The importance of religion to medieval Novgorod is illuminated in the St. Sophia’s cathedral, one of the magnificent historic places of worship and monuments in this city. Venerable Barlaam the Abbot of Khutyn, Novgorod
St Barlaam led a strict solitary life, occupying himself with unceasing prayer and keeping a very strict fast. He was a zealous ascetic in his labors: he cut timber in the forest, chopped firewood and tilled the soil, fulfilling the words of Holy Scripture, “If anyone will not work, neither shall he eat” (2 Thess. 3: 10).
Comments
×