Questions and Answers on Theophany, the Baptism of Christ 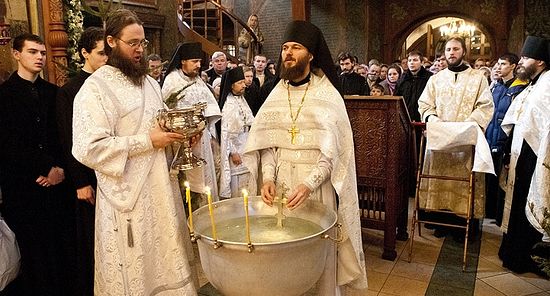 Is the holy water blessed on Theophany still Theophany water all week?

Theophany water is the same from the moment of its sanctification for the entire year, or two, or more, until it runs out. No matter what day you take it from the church, it never loses its holiness.

What is the (Church Slavonic: Sochelnik), and what should we do on this day?

The word sochelnik, or sochevnik is what we call the days before two of the great twelve Church feasts: the Nativity of Christ and the Theophany of Christ. The name comes from the Church Slavonic sochivo—grains of wheat or barley, lentils, or peas soaked in water. This is the food we take on this day according to the Church rubrics. On the Nativity, Orthodox Christians have a pious custom of not taking any food until the appearance of the first star, in remembrance of the star that appeared in the East (Mt. 2:2), which heralded the birth of Jesus Christ. This, however, does not come from the Church canons. Each person should practice abstinence from food according to his or her own strength.

The grace of the sanctification imparted to the water is the same on the Eve of the Theophany (January 5/18) as it is on the day of the Theophany (January 6/19). It is one and the same feast day, and one and the same prayer rite is used. The basis for the Great Blessing of the Waters on the Eve (January 5/18) consists in the fact that on this day, a Great Festal Vespers is served, which is combined with the Liturgy of St. Basil the Great. Thus, the feast has already commenced. For the day of the Baptism of the Lord (Theophany) the Great Compline service is read, then a festal Matins, and the Liturgy of St. John Chrysostom.

In our days, the use rite of the Great Blessing of the Waters has become a traditional rule. In the ancient Church there was an important reason for this: On the Eve of the feast, catechumens were baptized. In honor of this Sacrament, the first Great Blessing of the Waters was served in remembrance of the Baptism that our Lord received in the waters of the Jordan at the hands of the holy prophet John the Baptist. The difference between first and the second Blessing is that on the Eve, the Blessing took place in church, where the catechumens were baptized, while on the day of the Theophany the faithful went to the Jordan River.

In the first centuries (including even the fourth and fifth), the Great Blessing of the Waters took place only in the Jerusalem Church, where there was a tradition of going down to the Jordan River to the place where our Savior received Baptism. Later people would make a “Jordan” in other places where rivers and lakes were to be found. 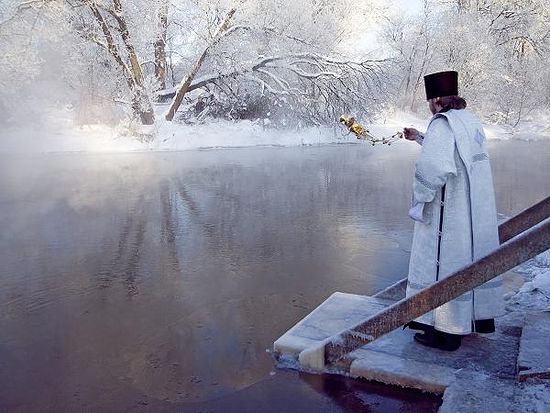 Christians have great reverence for Theophany water. St. John Chrysostom said, “Christ was baptized, and sanctified the nature of the waters; and therefore on the feast of the Baptism, all who draw water at midnight bring it home, and keep it all year. And so, the water in its essence does not spoil from the duration of time, but when drawn this day, it remains fresh and unspoiled for a year or two or three, and even later than that it is of no less quality than water freshly drawn from springs” (Discourse XXXVII. “On the Baptism of Christ”).

Was St. John the Baptist baptized?

When our Lord Jesus Christ came to the Jordan to be baptized, St. John the Forerunner said to him, I have need to be baptized of thee, and comest thou to me? (Mt. 3:14). Researchers see in these words not only an expression of great humility, but also the desire to receive the New Testament Baptism. The Savior answered, Suffer it to be so now (Mt. 3:15). Here we can clearly see the prophecy that the time will come when the Forerunner of Christ will be vouchsafed Baptism. St. John Chrysostom, Blessed Jerome, and other holy fathers consider that this was fulfilled through the holy martyrdom of which the great Prophet was found worthy (Mt. 14:3-12; Mk. 6:24-30). The Church accepts baptism by blood as being just as valid as baptism by water.

Does it matter whether a wooden cross or some metal cross was used to sanctify the waters? 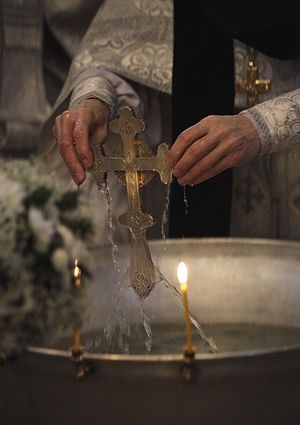 The cross has spiritual significance independent of the material used to make it. In the Rite of the Great Blessing of the Waters, nothing is mentioned about silver or silver crosses. In the Church, crosses used are made of metal, wood, ceramics, and other materials. In ancient Russian monasteries located far from towns, most of the crosses were made of wood. In the monastery of St. Sergius of Radonezh, even wooden utensils were used in the Sacrament of the Eucharist. In the Church Archeology office of the Moscow Theological Academy there is a wooden discos used by St. Sergius of Radonezh.

Theophany water can be kept for years. St. John Chrysostom spoke of this quality: “Christ was baptized and sanctified the nature of the waters; and therefore on the feast of the Baptism, all who draw water at midnight bring it home, and keep it all year. And so, the water in its essence does not spoil from the duration of time, but when now drawn, remains fresh and unspoiled for a year or two or three, and even later than is of no less quality than water freshly drawn from springs.” Some priests intentionally do not use metal crosses in the Blessing of the Waters in order to keep people from erroneously thinking that the priests use silver. The life of over ninety percent of our Russian Orthodox churches has been revived only over the last couple of decades. All church utensils are obtained from modern church shops. It is naïve to think that only silver crosses are used in our modern churches.

The absurdity of the opinion that priests use silver to bless the Theophany waters becomes even more obvious if we take into consideration the ancient tradition of sanctifying bodies of water (lakes and rivers) on the feast of Christ’s Baptism. In our ancient capital [Moscow], the patriarch in the presence of the tsar and his subjects performed the Great Blessing of the Waters in the Moscow River at the Tainitsky Gates of the Kremlin. This is sometimes done even today, if there is a clean body of water nearby. Can you imagine how much silver would be needed to have any effect on the waters of lakes and rivers? 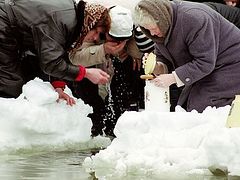 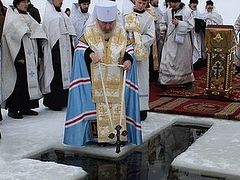 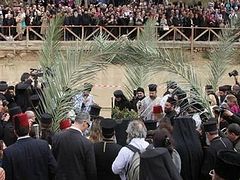 Theophany Miracles in the Holy Land
"The Jordan was turned back"
Larisa Kaliuzhnaya
“A miracle will definitely happen to each one of you in this Land—after all, you have stepped foot upon the extraordinary, Holy Land. Believe me—I have lead tour groups here for five years now. You only have to be able to see these miracles.
Comments
×