Confession and Communion: A False Problem 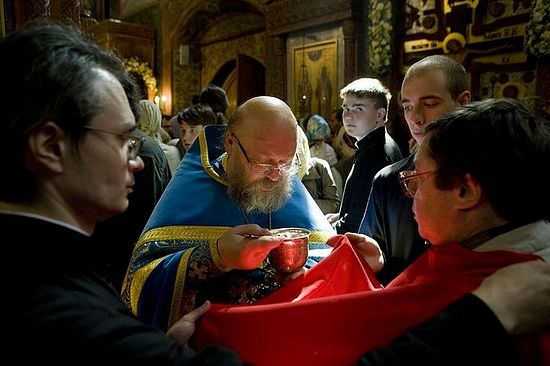 Such is the false question which I first heard over forty years ago, to which any answer must also be false, for false questions can only have false answers. What is the reality?

If we are talking about nominal Orthodox who take Communion only occasionally, perhaps once or twice a year or once or twice every ten or twenty years, then Confession before every Communion is the rule.

What about Communion whenever you want and Confession whenever you want? This statement is a piece of consumerism that treats the Church as a supermarket and has its roots in the anti-sacramental and therefore anti-priestly Protestant mentality that lies behind consumerism: ‘Do whatever you want whenever you want’. Little wonder that this mentality is that of certain unChurched converts, precisely of Protestant origin, who always take Communion without Confession and even scorn cradle Orthodox who do not take Communion at every Liturgy. The result is that cradle Orthodox no longer attend convert services, feeling hostility. And that is a pity because it means that unChurched converts can no longer meet anyone they can learn from, with the result that convert ghettos are only reinforced.

What then is the ideal? It is to take Communion, voluntarily, according to personal spiritual needs, when you spiritually need it (not when you want it – ‘want’ is the word of consumerists) and to have Confession beforehand because we should need Confession before Communion. If we do not feel the need for Confession, it suggests that we do not need Communion. Put simply, if a full dustbin does not know that it needs emptying (Confession), then it does not need filling (Communion).

There are exceptions to this. Firstly, in parish life, for example during Passion Week or Bright Week or at other times as before the Nativity or Theophany, when there may be liturgies on several consecutive days and simply we may feel no need for Confession two or more days running because the faithful are striving to live a quiet and devout life ‘in all godliness and honesty’. The second exception is in monastic life or among those who are living a monastic-style life in the world and may take Communion more regularly but only have Confession every few days or even every few weeks, according to their spiritual father’s directions.

Modernism which has more or less abandoned the sacrament of Confession (if it ever knew it) will say that it does not need Confession frequently because the ‘early Christians’ took Communion every day. This is dangerous spiritual pride. Are modernists seriously claiming that they live on the spiritual level of Orthodox in the first centuries who faced possible martyrdom every single day? Let us face reality. Those in modernist groups who want weekly or even daily Communion (impossible for menstruating girls and women) are simply copying heterodox, for whom, in any case, there is no Body and Blood of Christ, but just biscuit wafers with or without some wine. And what is unconsumed among them, they throw away. Such modernism is not Orthodox and should learn what the Apostle Paul says and tremble:

Wherefore whoever shall eat this bread and drink this cup of the Lord unworthily, shall be guilty of the body and blood of the Lord. But let a man examine himself, and so let him eat of that bread and drink of that cup. For he that eats and drinks unworthily, eats and drinks damnation to himself, not discerning the Lord’s body. For this cause many are weak and sickly among you and many sleep (1 Cor 11:27-30).

Confession and Communion form a virtuous circle, for the benefits of Communion depend directly on our preparation for it. Modernism which superstitiously misbelieves that Communion is a sort of magic, which confers its benefits (listed in the prayers before and after Communion) automatically, without any effort on our part, is sadly and dangerously mistaken. I have often seen the sorrowful consequences of this mistake in the past decades and they always lead to lapsing from the Faith, which is the only thing that Satan wants us to do. How to Prepare for Holy Communion. Orthodox Spirituality, Part 5

How to Prepare for Holy Communion. Orthodox Spirituality, Part 5
Fr. Alexey Young
The seeds of holiness are planted within us at Baptism and Chrismation, but we must nourish these seeds by prayer, fasting, and almsgiving in imitation of Christ and His saints. The spiritual equivalent of the sun is the Holy Spirit—He acts upon us in the Sacraments, especially in Chrismation. In this way, the Church is the seedbed of holiness. We must water the seeds and pull out the weeds and thereby discover that the spiritual path is a tremendous adventure all about going home to God! Preparation for the Sacrament of Confession
St. Ignatius (Brianchaninov)
I will say of them what has already been said of them; I will pronounce the sentence that was already pronounced. I will say it with bitterness of heart, but without mistake, because I am merely repeating the Apostle’s words, the words of God. The widow that liveth in pleasure is dead while she liveth (1 Tim. 5:5-6). Do not think that these words are directed only at widows according to the flesh! No, they apply even more succinctly to me and you, who have renounced the world to serve Christ. Confession — not a novel but a battle
Archpriest Valerian Krechetov
“How should I tell the priest about my sins? Is a feeling of repentance indispensable during confession? After confession, should one expect a feeling of spiritual relief, or lightness of soul? These beginners’ questions often remain troublesome even for very experienced parishioners.
Comments

BG6/22/2017 1:31 pm
Hope my questions will not offend.
1. When one priest looks after a parish of hundreds, how can I, realistically, ask him to receive my confession more than once every few months (at most)?
2. How can I believe that a woman with a flow of blood (healthy or not) is not allowed to touch our Lord? (What is the meaning and the history of this interdiction, in the church?)
×