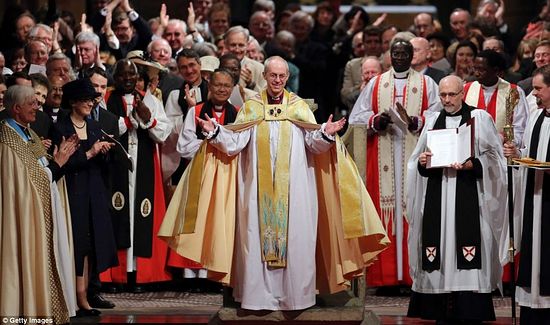 Following a two-year discussion on the matter, bishops of the Church of England have announced that they will not accept gay marriage, defending instead that marriage is the union of one man and one woman, reports The Guardian.

The bishops’ report comes after two years of intense internal debate and reflection involving clergy and laity and decades of factional feuding within the church. “Gay rights” crusaders within the Church of England are infuriated, condemning the bishops’ report.

Bishop Graham James of Norwich stated that the church should not “adapt its doctrine to the fashions of any particular time,” presenting the bishops’ report at a press conference. However, church law should give “maximum freedom” to gay couples, giving clergy some leeway in certain cases, the report also states.

The bishops have stressed that this report is to be accepted as part of an on-going process, rather than an attempt at a final answer on the matter. The Church of England is a widely-varying mix of liberal and conservative Christians, with a wide range of views on a wide range of matters.

The church’s gay campaigners have termed the report “cruel” and a “utter failure,” predicting it will lead to increased clerical disobedience on the matter, which the hierarchy admits is already happening to some degree. Christians Reportedly Now a Minority in U.K.
Cardinal Nichols went so far as to compare the present situation of Catholics in Britain to times of severe persecution in centuries past. Binary Code
Fr. John Guy Winfrey
The hierarchs, clergy, and vast majority of Orthodox Christians are quite clear on the issue of marriage as a sacred institution, consisting of one man and one woman. But because of the opportunity for anyone to post an opinion on the internet without going into detail about their own standing in the Church, other articles also occasionally need to be posted to explain what is really going on. Here is one blog post by Fr. John Guy Winfrey of the Antiochian Archdiocese of America, with some original thoughts on the nature of things.
Comments

BA Theology & Religious studies3/2/2017 5:19 pm
A minor update:
This C of E bishops' report was not endorsed by its clergy. While not necessarily a LGBT activists' victory, this undermines authority of the Bishop of Canterbery.
http://www.christiantoday.com/article/church.of.englands.clergy.issue.shock.rebuke.to.bishops.conservative.view.on.sexuality/104738.htm

Gatis2/13/2017 12:11 pm
Thank You Hevenly Father for strenghtening those who are wise and are not allowing to cripple out our and our kids undrstanding of core humanitarian values in the Churches. Dear God please strenghten every day those who are teaching rightciousness and fighting against deliberate mindcripling and bless those who are victimes of that deliberate action with your abilty to guide their minds and heal their cripled souls because they are victims who were raised without knowing Your Word and therefore are easely to manipulate and use for purposes by those willing to do so.

OSOFUNDIYA OC 2/3/2017 10:42 pm
I thank God that "a ray of divine truth has perpetrated the heart of the CHURCH OF ENGLAND leadership.

ONUCHUKWU, EJIKEME ELOZONA2/3/2017 4:18 pm
THE CHURCH IF IT INTENDS BEING A CHURCH HAS THE BIBLE TO FOLLOW OR NOTHING ELSE.
BIBLE DEFINITION OF MARRIAGE IS BETWEEN A MALE AND FEMALE. IF THE CHURCH INTENDS BEING THE CHURCH OF JESUS CHRIST, THIS IS THE STANDARD.
I GREET YOU MY BISHOPS. YOU HAVE GOD TO FACE WHO HAS CALLED YOU IF YOU DO OTHERWISE.

post. AYO REUDAN2/3/2017 1:52 pm
we expected this act to be taken but the church has been quiet about it.It is not an issue to be dabated upon, or put into considration because it is an absurd thing. take a look at animals there is no way you find them mating with same sex but rather maintain their opposite sex. therefore if any is still racing dust about this such a cleargy should be plucked out of the church. it is my prayer that God will enable the bishops in the church of england to stand on this decision and not compromise in Jesus name amen.

todaynewsreview2/3/2017 12:04 pm
Glory be to God. Sanity is gradually returning to the fold. Same should be applied to the secular society. Please follow our daily updates here>>>http://bit.ly/2dMPlYl

Albert 2/3/2017 10:47 am
Thank God the truth is finally said...let us not relent in praying to God for its implementation and sanity of the land and lives that are affected already...

Rev.Fr. Kenneth Obinna Ikeh2/2/2017 4:04 pm
The Church of Jesus Christ is matching and the gate of hell shall not prevail but in all we should still show love to those it may affect negatively. Shalom

Ekundayo 2/2/2017 12:12 pm
Thanks to God for d conclusion.
Nigerian Anglican can at least witness some degrees of sanity in Church of England.

Anthony Mandile2/1/2017 7:37 pm
Why the matter took two years of study, deliberation or whatever is beyond me. Anthony

about time2/1/2017 6:38 am
Crazy it is that the a Christian church had to discuss this for 2 years before finally deciding to follow the words of our Jesus Christ who defined marriage as between a man and a woman... and he said it twice (SEE Matthew 19:4-6).

Anthony1/31/2017 10:25 pm
Hi! There's a mistake in the title. It should read ''CHURCH'' OF ENGLAND REFUSES TO RECOGNIZE SAME-SEX MARRIAGE TODAY - tomorrow will be a different story.

The English have a propensity to speak with a forked tongue - masters of hypocrisy and double standards. Please correct. Thanks!
×