Why do Russians insist on the name “Holy Russia”?

A reader of my first attempt at writing a novel noticed that I seemed to be obsessed with the idea of American exceptionalism. He was only partially right.

I’m not a fan of American exceptionalism (look where it’s gotten us, after all). I am, however, a fan of Russian exceptionalism. Now, before you dismiss that outright, it might be useful to consider the history of that strange, elusive idea known as “Holy Russia.”

What is Holy Russia? 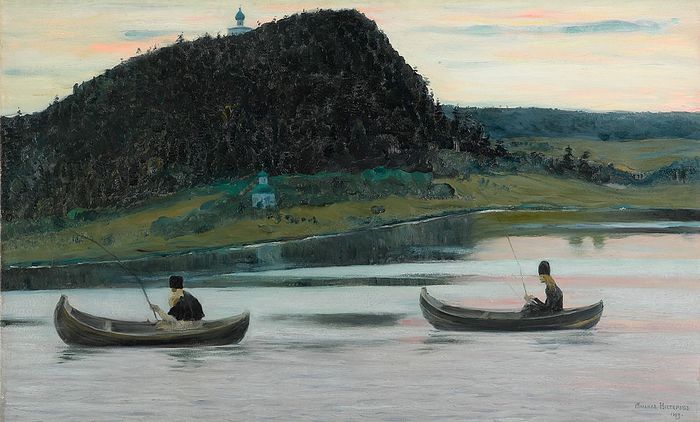 The Russian word for “holy” (sviatoi) is etymologically connected with the word “bright.” Both words are ancient, and the root of both goes back to an Indo-European antiquity. In other languages, there are similar words that mean “light,” or “world,” or “day,” as well as something white, pure, shining.

The contemporary Russian philosopher and cultural historian Valery Lepakhin notes that in old Russian epic poetry “Holy Rus” is equated with “the white (or wide) world” and “Mother Earth.” Take, for example, the call to arms of the most famous bogatyr from the epic poetry, Ilya Muromets:

And then his agile feet walked,
His white hands worked,
And he saw the wide, white world.”

Dobrynia Nikitich (the second most famous of the “three warriors,” says this about himself:

I would no longer ride, not I, through Holy Rus.

And he is also described thus:

He was an exceptionally brave warrior,
A mighty warrior of Holy Rus!”

The “Song of the Fall of the Russian Land” (13th century) begins with the following words:

O, how brilliantly bright and beautifully adorned is the land of Rus!”

In the “Poem about the Book of the Mysteries,” (Golubinaia Kniga), we read these words:

Interestingly, the word “Rus” is also etymologically similar to the word “light.” After all, even contemporary Russian has preserved the old word “rusy” (light-haired). In 911, the Rus’ (“rusy”) signed a treaty with Byzantium (see my post on Prince Oleg the Farseer). The language of the treaty calls Prince Oleg “His Brightness.” An Arab chronicler of the tenth century, Ahman ibn Fadlan, in an otherwise unflattering portrayal of the Rus, mentions that one of their rulers had the title “bright prince.”

This association of “Russian” with “bright” remained inherent in the Russian language for a long time. Both Russians and Europeans called the Kingdom of Muscovy “White Russia.” Foreigners continued to use this term until the beginning of the 18th century. You can even find it on some European maps.

“The White Tsar” is praised often in Russian folk songs. Other European names for the Russian Tsar included “illustrissimus” (most illustrious, or bright) or even “albus” (white). From the 16th century on, he was called “the White Tsar” in the East as well. Tibetan monks named Nicholas II “the White Tsar.” (They believed he was a bodhisattva of the White Tara.) 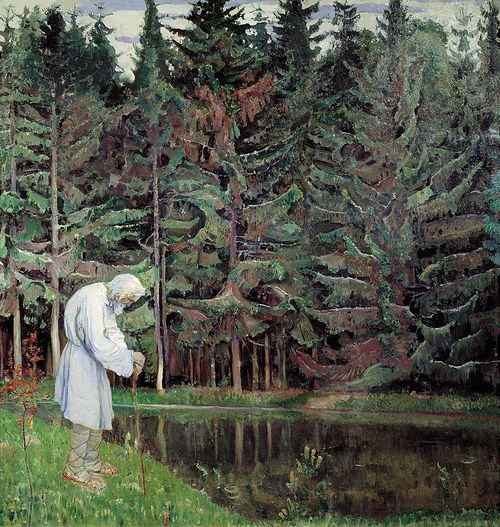 At the same time, by the 16th century, “Holy Russia” as a term began to acquire a distinctly religious connotation, much of which was tied up with apocalyptic fears concerning the 7,000th year after creation (1492). Elder Filofei, in his famous letter, wrote to Tsar Vasilli III as “the all-bright and highly-enthroned lord, the Grand Christian Prince who shines brightly in Orthodoxy, the lord of all, the rein-holder of all holy and great Russia.”

The elder reminded the Grand Prince that after the fall of the first and second Rome, only the Russian Church “shines in its Orthodox Christian faith over the entire firmament more brightly than the sun.” He then insisted:

Let Your Mightiness know this: all Orthodox Christian kingdoms have united under a single ruler, and you alone under the heavens are known as the all-holy and pious Tsar.”

The elder, for the first time, insisted on Russia’s high calling, and on the responsibility of its rulers to uphold that calling.

After this usage, “Holy Russia” stopped being an ethnic indicator. It’s not by accident that Prince Andrei Kurbskii, in his letters to Ivan the Terrible, spoke of the Russian state as “The Holy Russian Empire.” In the 17th century, the historical epic “The Tale of the Siege of Azov” recalled the times of the epic heroes, the “bogatyrs of Holy Rus’.” But now, the bogatyrs have obtained an explicitly religious significance:

Now we, miserable ones, part with your holy icons, with the Christians and all Orthodox. Never again will we step on Holy Rus! Death has come to us, sinners, in the desert. All for the sake of your miraculous icons, for the faith of Christ and the name of the Tsar, the entire Tsar-dom of Muscovy!

In the beginning of the 19th century, the idea of “Holy Rus” had a second wind. With the patriotic fervor of the Napoleonic Wars, the old Russian epics were reprinted for the first time in centuries. The historian Nikolai Karamzin (see my translation of his wonderful story “Martha the Mayoress”) was the first to call his homeland “Holy Russia.” Naturally, this usage was intended as the most exalted possible praise. Pushkin himself wrote, “O Holy Rus! My Fatherland! I am yours!”

And this wasn’t necessarily a religious title any longer. For example, an official manifesto of Emperor Nicholas I, published after the French Revolution of 1848, had the following words:

According to the example of our Orthodox forebears, having called upon the help of Almighty God, We are ready to meet our enemies, wherever they may be. Without sparing ourselves, let us, in an unending union with our Holy Russia, defend the honor of the name of Russia and our untouchable borders. 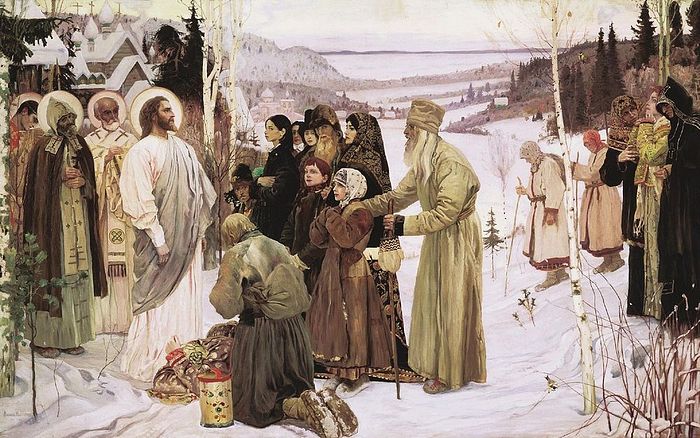 
The poet Prince Peter Vyazemsky reacted to the language of the manifesto of Nicholas I in a poem titled “Holy Russia.” Though he was a free-thinking radical in his youth, he was able to beautifully express the heavy responsibility of the calling of “Holy Russia.” In other words, Russia must strive to be holy in deed, not just in word.

Zhukovsky, another great poet, wrote a letter to Vyazemsky, in which he expressed his hope that the title of Holy Russia will never lose its profound meaning, even if it becomes a commonplace. Here are his astounding words:

In the expression “Holy Russia” you can hear the entirety of our unique history…It received its profound meaning from the times that we were divided…when there were many small princedoms dependent on the Grand Princedom. When we all united, it was not to become Russia, but Rus, that is, not a government, but a family. We all had a single fatherland, a single faith, a single tongue, the same remembrances and traditions. This is why, even in the bloodiest Internecine Wars, when Russia still did not exist, when the princes constantly fought each other for power, there was still a single, living, undivided Holy Rus’ for all.

Mikhail Nesterov. In Rus. The Soul of the People.

In the 1850’s, Vyazemsky developed his thought concerning Holy Russia even further in his so-called “Prayerful Thoughts”:

“Heaven forbid that in the darkness and vanity of life,
We will grow proud as Pharisees,
Puffed up in our own holiness, rebuking others,
Forgetting that pride is a great sin.
Not for glory, not for honor, did the tablets of the nation
Give our Russia the name “holy.”
But to caution us, to remind us, as a testament.
We must preserve from our earliest years
The fear of God, and love, and the pure fire of faith.
So that our good deeds and good examples,
Bequeathed to us in ancient simplicity,
We may pass on to our sons in full.”

So by the 19th century, “Holy Russia” had two meanings.

This second meaning of “Holy Russia” is the one most commonly encountered in church hymnography. It was included for the first time in the service composed for the canonization of Patriarch Hermogenes, right before the Revolution of 1917:

Our God is praised through you. O holy martyr Hermogenes, may you always rejoice in the light of His countenance and constantly pray that Holy Russia will not fall.

The service to all Russian saints (composed in 1918), has perhaps the most famous usage of this phrase:

The service was confirmed by the Council of 1918. That year, “Holy Russia” was only beginning its historical trials, the worst of its history. The communists themselves understood that they were toppling not merely Russia, but “Holy Russia.” See this excerpt from “The Twelve” by Blok:

Comrade, hold on to your gun, be brave!
Let’s put a bullet into Holy Russia –
Into ancient, sturdy,
wood-hutted,
Fat-assed Russia!
Yeah, yeah, without the cross!”

It was into this world of Communism vs. an idealized Holy Russia that I was born. All the stories I heard in childhood were about it. My first identity crisis as a teenager was connected with it. Not surprisingly, the themes of identity and the idea of the “election of a nation” are central to my novel, A Lamentation of Sirin. I still wonder about it—what is Holy Russia, really? Can it still exist, even in today’s broken version of the land I love?

If you enjoyed this post and would like to read more about Russian traditions and culture, see my website: Nicholas Kotar, Fantasy Inspired by Russian Fairy Tales

Greg Gniewkowski6/15/2018 9:03 pm
I hope and pray that the Russian nation and it's people will strive daily to be known as Holy Rus, as a testimony to Our Lord who gave you your land and the opportunity to witness it to the world.