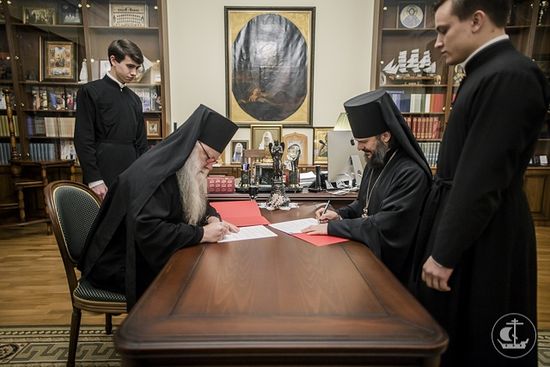 On February 3, Archbishop Ambrose of Peterhof and Archbishop Peter of Chicago and Mid-America (ROCOR) signed a cooperation agreement in their capacities as heads of their respective educational institutions: the St. Petersburg Spiritual Academy and the Orthodox Pastoral School of the ROCOR Chicago Diocese.

As the site of the St. Petersburg Spiritual Academy reports, the agreement provides that interaction and cooperation will immediately begin in several academic fields: collaboration concerning modern educational technology, the exchange of educational and scientific publications, joint academic symposiums, conferences and seminars, and the implementation of exchange programs for students, teachers, and researchers.

Already immediately after signing, the bishops exchanged academic publications put out by their respective institutions. Archbishop Ambrose also announced that a list has already been compiled of St. Petersburg students who want to participate in an exchange program with the Chicago school.

Archbishop Ambrose offered a short tour to Archbishop Peter and those with him to end the visit.