The Most-Discerning Abba Isaac the Syrian

Ascetics of all ages value the gift of spiritual discernment. They especially revere their mentors who shone forth with this gift. What does this gift consist of? In what historical examples could we acquaint ourselves with the spiritual gift of discernment?

Let us turn to the legacy of Venerable Isaac the Syrian and of St. John Climacus as examples. They speak of the most vital, “classical” topic for spiritual discernment: how do the pernicious passions take root in the heart of man and become a “second nature” for him? St. John of the Ladder gives an example on this topic of spiritual discernment from the experience of ascetics of very exalted life. In St. Isaac the Syrian we will find an example more common, painfully familiar to every Orthodox Christian. Therefore, the second example is perhaps more important than the first. 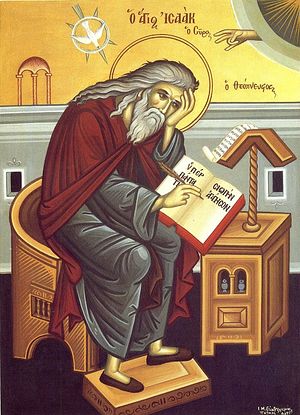 St. Isaac the Syrian
How does a passion become “second nature” for a man? In his “Word on Chastity,”[1] Abba John Climacus enumerates the “classic” steps of an impure thought taking root in the soul:

1. the assault of a sinful thought (the thought appears in a man’s field of vision as a tempting word or visual image);

2. interaction (a person focuses his attention on the thought);

3. consent (a person agrees with the thought and receives enjoyment from it);

4. struggle (a person fights with the sinful thought “on equal footing”);

5. captivity (the thought wins, a person has no strength to resist the sin);

6. passion (the thought takes root in the soul and becomes its “second nature”[2]).

To these famous stages of an impure thought taking root, Abba John adds an example from the life of “the more precise and discerning fathers.” Where the gift of spiritual discernment appears, the fathers perceived another method by which an impure passion attacks experienced ascetics. This type of attack they called the assault of a thought. What kind of assault?

The attack of a thought “without passage of time, without word or image, instantaneously introduces the passion to the victim… It manifests itself in the soul by a simple remembrance with which the soul has no time to dally, since it is independent of time, unconnected with any image.”[3] Enumerating the stages of a sinful thought’s taking root, Abba John notes that the stage of struggle may be absent. With the attack of a thought, it turns out, there is no stage of interaction! Indeed, there is no consent or struggle. The attack of a thought immediately reaches the stage of captivity and passion “without word or image,” that is, without the “classic” assault of the thought. Through repentance the discerning fathers were able to expose the insidious incursion of the thought, “to perceive such subtlety of thought” and overcome its harmful effects by the grace of God.

Thus, Venerable John examines the stages of the enrooting of an impure thought in the soul and tells of a more subtle unseen warfare that an attacking thought wages against experienced hesychasts, presenting itself also as an impure thought, only exceedingly subtle and swift. Whose spiritual gift of discernment do we read about in St. John? Which of the fathers displayed such a high gift and rebuked attacking thoughts? We can’t say precisely. But don’t be grieved. We find such discernment in Abba Isaac the Syrian, and here the attribution of the spiritual discernment will be obvious.

“A Word on the Subtle Stage of Discernment” by Abba Isaac the Syrian also speaks of a passion’s activity, about the assault (demonic suggestion) and consent. Here is the primary source:

Not all the passions wage war by means of assault. For there are passions that only cause the soul affliction. Listlessness, despondency, and grief do not attack, whether by an assault proper, or through relaxation; rather they simply lay a weight upon the soul. The strength of our soul is proven, however, by victory over those passions which wage war by assault. A man must have a refined knowledge of all these, and recognize their symptoms, so that with every step he takes he may be conscious of the place he has reached, and in what terrain his soul has begun to walk: in the land of Canaan (The land of Canaan was the promised land), or beyond the Jordan.[4]

Regarding the “classic” themе of struggle against the passions, Abba Isaac makes a wonderful clarification: struggles with the passions are not all the same, varying depending on which passion is active—lust or despondency. The spiritual discernment of Venerable Isaac is at once simple and exceedingly valuable.

As we know, an impure thought is usually suggested (the assault of the thought), then follows interaction with the thought, consent (to unite with pleasure), and so on, until captivity and the unimpeded activity of the passion in the soul. The stage of consent plays a key role in the struggle with an impure thought, as the gratification of a lascivious thought attracts a man to sin. Because of pleasure, the sin becomes something alluring for the man. Only then does sin show its unnaturalness and vileness in full. Apart from pleasure, it brings a man sorrow, disgust, and a feeling of spiritual desolation. And then within the man awaken the pangs of conscience, which can lead to repentance and forgiveness of sins, to the cleansing of the soul. But this is all later; the impure battle begins with assault and consent-pleasure.

Despondency acts otherwise, not by pleasure, but immediately by sorrow. There is no “classic” assault of a thought (a seductive word or image). There is no interaction and consent. It’s different: despondency inflicts a heaviness upon the soul. Perhaps the imposition on the soul of a despondent heaviness should be correlated to the stages of struggle and captivity.

Unfortunately, we usually do not wage war against despondency. Feeling the heaviness on the soul, a man thinks: “I’m having some kind of melancholy day today. Well, and how could it be otherwise? I’m feeling a bit sick today. And there’s some reasons to have a bit of a dreary mood on top of that. They announced price hikes on the news today, and a half hour later I got a bad call from work…” He doesn’t even imagine that despondency is bending him to its will. He doesn’t see that the enemy is in close range. He thinks it’s just his mood. He thinks it’s just a manifestation of his melancholic nature with some illness added, a rise in prices, and problems at work. He doesn’t even guess that he feels a heaviness because the passion of despondency has captivated him. Over time it becomes his “second nature,” and the soul itself seeks out reasons to be despondent; it is plagued by despondency and again goes off in search of the “negative.” And every press release has an excessive number of reasons for despondency, a hundred times more than is ultimately permissible.

Of course, it is hard to call the onrush of a despondent mood the “classic” assault of a thought. We don’t fall into despondency through the delectable stage of consent. But the absence of pleasure, and the absence of any other attraction helps us to struggle against despondency and sorrow. This is why, according to Abba Isaac, “the strength of our soul is proven, however, by victory over those passions which wage war by assault.” We readily admit that the heaviness emerging in the soul cannot be termed the assault of a thought, meaning “words and images.” Nevertheless, the impure attack of a thought acts “without word or image,” however, Venerable John Climacus calls it a more subtle thought… To reflect on the attack of the thought or the specific activity of despondency with benefit in this matter. it’s necessary to be spiritually discerning.

It’s a miracle how discerning St. Isaac the Syrian is! He traces all the various ways a sinful thought takes root in the human soul. Abba Isaac reveals the gift of spiritual discernment in all its might.

[2] Passion is not part of human nature. Therefore we call it “second nature.” We write about nature in quotes, implicating the famous expression: “Habit becomes second nature.” The activity of passion in the soul of a hardened sinner is mistakenly taken as a manifestation of its nature, of its character and innate tendencies. A vicious habit makes a sinful “second nature” out of passion.

[4] Ascetical Homilies, Homily 68, p. 332 (Holy Transfiguration Monastery, 2011). The full title of the homily is “That We Can Understand the Degree of Our Manner of Life From the Changing States of Our Mind, and That We Should Not Childishly Rely on the Great Diversity of Our Labors, but As Wise Men We Should Recognize the Degree of Our Soul From the Secret Renewal Which We Perceive Day by Day, and on the Subtle Stage of Discernment.” Conversations with Abba Isaac: Spiritual Neurosis
Fr. Micah Hirschy
According to Abba Isaac, humility is the way to authentic life, balance, and both wholeness and holiness. “A humble man is never rushed, hasty, or agitated, never has any hot or volatile thoughts, but at all times remains calm. Even if the heavens were to fall upon the earth, the humble man would not be dismayed.”

Conversations with Abba Isaac: Saint Paisios and Positive Thinking
Fr. Micah Hirschy
Saint Paisios has written, “You will be greatly assisted by Abba Isaac of Syria, because he helps us understand the deepest meaning of life. Furthermore, he helps the man who believes in God to drive away every complex, great or small. A little studying of Abba Isaac transforms the soul with its many spiritual vitamins.”
Comments

Castrese Tipaldi2/10/2017 3:01 pm
The infiltration of the "more subtle thought" can be figured as a sort of "fifth column" inside the city, while under siege by the assaulting thoughts outside the wall.

The strength of our soul is proven by victory over those passions which wage war by assault, indeed, but the fifth column prevents that strenght.
The besieger thoughts may then even not storm the city, as it is already captive.

It resembles the state of the nations, today.

Great is the Lord in His saints!
×