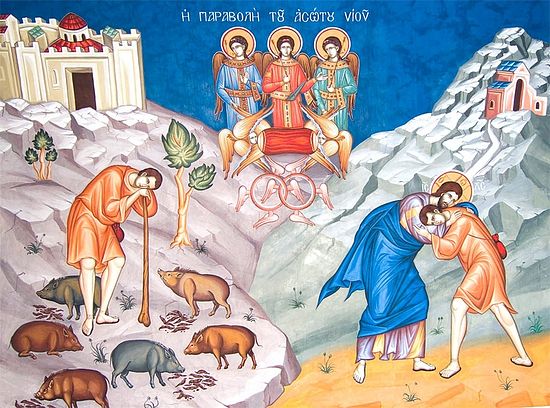 By now you know that we are firmly in the Pre-Lenten period. We are only two short weeks away from the start of the awesome and wondrous struggle that we call Great and Holy Lent. Here during this time before the great fast, the Church gives us of her milk in order to prepare us with a foundation upon which to build. She starts us off with nourishing milk in order that she might later give us meat. Last week we heard the parable of the Publican and the Pharisee. The lesson was a simple one: humility is the start of the positive spiritual path. Today we hear another of the Lord’s famous parables: The parable of the prodigal son.

This parable should be familiar to each of us. Not only because we have heard it from year to year over the course of our lives, but because the parable is about each of us. Our daily lives reflect this struggle that is symbolized by the prodigal son. We have been given everything we could ever need in life. The proof that this is indeed the case is that you are here, alive. Life itself is a gift from God. More than simply giving us life, the Lord has continually poured out His many gifts and blessings on each of us. The problem is that humanity is notoriously good at making idols of created things and ignoring the One who is the source of all things. Humanity is also notorious for using people for their benefits without attaching proper reverence and love to those who have benefitted us. The “casual” dating scene in today’s culture is a sign of this fallen concept of using others for the benefits they provide instead of engaging in a relationship which requires an investment of time, reverence and love.

The prodigal son used his birthright (which came from his father) and used his inheritance (which his father had earned) in order to rebel against this same father who was the source of these good things in his life. The prodigal was like a man who is given part ownership of a boat with others. Yet in his greed and desire to go in another direction, he decides to divide himself from the others by taking a saw to the boat and cutting off his portion. Little does he realize that he will only end up at the bottom of the sea because of his selfishness and short-sightedness.

This parable is about each of us. We have each been rebellious in our lives. We have each fought God in order to have freedom on our own terms. This is not unlike the teenager that argues with his or her parents imagining that the parents are the enemy when in fact nothing could be further from the truth. The parents love the child and attempt to do only what is good for the child. Our rebellion from God is the very definition of sin. What you might find interesting is that God does not want unhappy slaves, actually He wants us to be free. He has created us with a free will. He does not force us to act in a certain way. He does not force us into anything. He doesn’t force us because He doesn’t want us to be slaves but sons and daughters and friends. What is most interesting is that when we choose to rebel against God and His teachings and commandments in order to gain our freedom, the opposite happens. We gain our freedom from God but we end up as slaves to our own desires, slaves to sin and ultimately, we end up slaves to death which is the fruit of sin.

Yet this parable should comfort each of us even more than it convicts us. Even though we have each been rebellious against God, just as the prodigal son was, we can also take comfort in the fact that we can come to our senses, just as the prodigal son did. What was it that led to his coming to his senses? It was his involuntary fasting and asceticism! Yes, even here the Church prepares us for the upcoming fast by showing us that the one who is rebellious can reclaim his heavenly inheritance by voluntarily choosing what the prodigal son received involuntarily through his hunger and difficulties. Through our voluntary hunger and thirst for God, we are sure to reclaim our senses and come to our right minds and turn from our wrong thoughts and wrong ways and remember and turn to the One who is the source of true freedom and true life.

No matter what you have done wrong in life. No matter your background or your history. There is nothing that you could do that would keep God away from you. His love is far greater than all of our sins. His forgiveness is generous and richly overflowing. Like the prodigal son, if we will simply come to our senses and turn towards our Father, we will find that before we have taken many steps, the Father will already be rushing towards us to embrace us and to clothe us with the white and brilliant garments of salvation. He will return us to His house (which is the Church) and prepare a great feast of joy, a feast of thanksgiving for our return, because we are His beloved children and nothing less.

Glory be to God forever AMEN. Walk away from the swine world
Fr. Jonathan Tobias

Walk away from the swine world
Fr. Jonathan Tobias
It’s no use to ask the Prodigal Son just how he ran away. He probably couldn’t tell you how he ended up in the swine world, a sullen existence that stretched as far as he could see. How do we treat the gifts of God? The Sunday of the Prodigal Son
Met. Anthony of Sourozh

How do we treat the gifts of God? The Sunday of the Prodigal Son
Metropolitan Anthony of Sourozh
Now, we turn away, carrying with us the gifts of God; and we live in a country that is also alien; we live in a world that is man-made, but not God-made, or rather made by God and distorted by man. What kind of hunger comes to us? The Only Thing That Can Save Us
Sermon for the Sunday of the Prodigal Son 2016
So during the Lenten season ahead—and throughout all our remaining life in this present world—when we see our sinfulness, our brokenness, when we begin to know by bitter experience the tragedy of how drastically we have lost our way, let us not despair. Let us not wonder at it. Let us not ask: “where is the Lord?” He is walking this path of exile beside us. He has been this way before, even down to the lowest depths of Hades. He did not send us here to perish, but to walk with Him the only path that exists to His Father’s House.
Comments
×