Christians beginning to return to Mosul 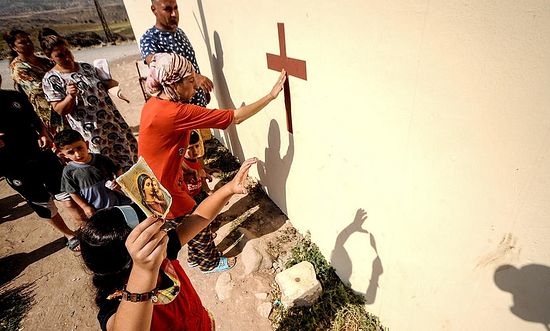 Christian refugees from Mosul who now live in camps in Levo Iraq hold a prayer session for the thousands of fellow Christians who have had to flee Mosul from the terror group the Islamic State. The UN estimates that 50,000 Christians are now internally displaced.

Despite the continuing situation of insecurity, some Christian families have been returning to Mosul, reports agenzia fides, with reference to ankawa.com.

The eastern districts of Mosul were the site of recent suicide bombings that left at least nine dead. Nevertheless, at least three Armenian Christian families have returned to their houses previously abandoned.

The Jihadi seizure of Mosul on June 9, 2014 saw the mass abandonment of Christian homes, many of which were then taken over by jihadists. The fleeing Christians sought refuge in other villages, mostly in those of Iraqi Kurdistan. The last ten Christian leaders were driven out by the militants on January 7, 2015 when they refused to denounce their faith in the Lord Jesus Christ and adopt the antichrist religion of Islam.

The sixth century Monastery of St. Elias located near Mosul was destroyed by ISIS militants in 2016. Meanwhile, in October, the nearby town of Bartella was taken back from jihadi militants, and the bells of the village’s church rang out for the first time since the summer of 2014 when the 15,000 residents fled. Six million Christians emigrated from Middle East over past 100 years Middle East Sojourners
An interview with Isaac Clifford Gardner. Part 2
He was a soldier with ISIS and had heard their radio broadcast and wanted to become a Christian. They were able to connect him with Christians in Syria who helped him escape. There are many such stories in the midst of the chaos and destruction.
Comments
×