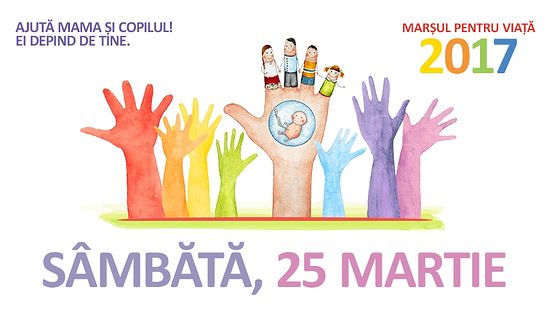 The March for Life is at its 7th national edition. This year’s theme, “Help the Mother and the Child! They Depend on You,” creates the opportunity to debate on the need, possibility and efficiency of supporting women in pregnancy crisis.

This series of thematic events does not have a unique organizer, but in each town and city it has different independent local organizers from local pro-life organizations and institutions.

Here are a few aspects motivating the theme chosen for this year:

Romania is second in the world (after Russia) in terms of the total number of abortions ever made compared to its actual population: 22,742,952 legally made surgical abortions have been made—only in Romanian state hospitals—between year 1958 and June 2016, compared to a population of 19,760,000 inhabitants as registered on January 1, 2016.

Since traditional Romanian civilization and spirituality have never valued abortion, the huge number of abortions can be explained by lack of knowledge regarding the issue of pregnancy crisis and by a pro-abortion public mindset—both originating in the communist regime and ideology.

A pregnancy crisis appears when a woman considers interrupting the natural course of her pregnancy, which would normally lead to giving birth to her baby, and thinks of abortion instead. Pregnancy crisis is triggered by outside issues she cannot cope with.

The most frequent causes of a pregnancy crisis are:

Pregnancy crisis is deepened by third-party pressure on the woman to have an abortion: 64% of the women who had an abortion felt pressured to do so, according to a study published in a prestigious medical journal.1

By associating “it’s legal, therefore correct” and by presenting abortion as an empowerment offered to women by communism (unlike the previous political regime), abortion has been positively valued. This has enabled a public mindset in favor of abortion. According to it, abortion would be the only safe and efficient option in pregnancy crisis.

The last decades of communism saw restrictions to abortion, enforced in 1967 on reasons of population decline. That is why, when it was completely liberalized after the fall of communism, abortion could again be presented as women empowerment, facilitated by the new post-communist regime.

The pro-abortion public mindset has had the following consequences in society:

Under these circumstances, for lack of information and support, women are practically pushed to abort their babies, while protecting the unborn is regarded as uncivil attitude.

In fact, abortion itself is uncivil attitude, lack of compassion, lack of respect, and lack of love for the woman and the child!

Abortion has harmed Romania more than any war

In year 2018, Romania will celebrate 100 years from its 1918 Unification. Romania’s involvement in the First World War, which ensured its Unification, meant losing 1,125,000 Romanian lives, sacrificed to make possible the Proclamation of December 1st, 1918.

The average abortion number for the first 6 months of year 2016 was 185.4 surgical abortions daily only in Romanian state hospitals.

To these data one must add the following categories of abortions unaccounted for in Romanian statistics:

Also, the number of illegal abortions remains unknown—both during the communist regime and after 1990.

Should the above-mentioned unregistered abortion categories be taken into account, the total number of abortions would probably be double the actual statistics.

In the Republic of Moldova, whose population on January 1, 2016 was of 3,553,056 inhabitants, statistics show 2,112,158 surgical abortions in state hospitals between year 1960 and January 1, 2016. These numbers place the Republic of Moldova in 10th place in the world in terms of total number of abortions compared to its actual population. Real statistics in this country should also include chemical abortions and abortions made by women of reproductive age working abroad.

A country project: valuing the gift of life and supporting women in pregnancy crisis

Firstly, everybody can help a woman in pregnancy crisis! The experience of those involved has shown that support from the unborn child’s father, from a friend, from a psychologist or a member of the clergy can make the difference between abortion and giving birth to the baby.

Secondly, society can create instruments to support women in pregnancy crisis, such as:

Without adequate information and without a national network of help centers for women in pregnancy crisis, the abortion trauma will continue to harm children, mothers, families and the whole society.

The Pro-Life Month and the March for Life are apolitical and non-confessional events, but they welcome the participation of all religious confessions and political parties.

The March for Life does not promote legislation to forbid abortion and condemns all forms of violence against women, wishing to promote social awareness and support for the woman to give birth to the life she is carrying.

The above-mentioned possibilities are not necessarily meant to involve only state institutions, but mainly society as a whole, in its diverse forms of civil actions, such as non-governmental organizations. We cannot expect the state to do what we do not do individually and through the associative possibilities existing today! This means real solidarity, love and civilization.

The dynamics of the March for Life in the last three years has been as following:

Starting from March 1 2017, the www.marsulpentruviata.ro website will publish details from local organizers.

3 Nor in the other armed conflicts during modern Romanian history: the Romanian Independence War killed around 4,300 Romanians, and around 833,000 Romanians have lost their lives to the Second World War. OCF members visit Romania’s Pro Vita Ministry
Pro Vita began offering a safe place to give birth as an alternative to abortion to women in cricis pregnancies. The ministry has grown to house over 400 orphans and abandoned children in addition to abused women and their children and the dispossessed aged.
Comments

T.D.2/17/2017 3:09 am
Why can't the Slavs see that this will destroy them? How many millions of Orthodox Christians could be alive today? More Slavs have been killed in the womb than have died in battle! This is rediculous and satanic. How can they expect God to grant them victory over those who have stolen their land when they drip with the blood of children? Do they think the God Who knows when a bird falls from the sky will overlook murder?
×