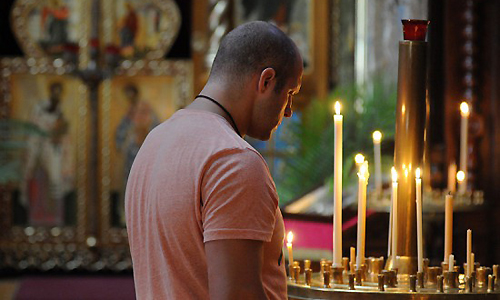 Russian mixed martial arts (MMA) heavyweight champion Fedor Emelianenko is currently in America, preparing for his first fight the States since 2011. He will take on American fighter Matt Mitrione on February 18 in San Jose in a fight put on by the Bellator MMA promotion company.

Emelianenko stopped for an eleven-minute interview with MMA News which gave several occasions for the champion to speak of his Orthodox faith.

Asked how he feels about being characterized as one of the greatest MMA fighters of all time, a visibly humble Emelianenko replied, “I fight in order to glorify the Christian faith and the Lord God, Jesus Christ.” He went on to say that his personal popularity is actually quite exhausting.

Asked if he would have more fights through the Bellator company, the Orthodox martial artist replied simply, “As God wills.” Likewise, speaking about training and how long he intended to continue fighting, he said he felt well physically, on par with the younger fighters he practiced with, but he added, “One thing—we propose, and God disposes.”

Offering advice to young fighters who would also like to become champions, Emelianenko said that, of course, they must work hard, and, reminiscent of Prov. 16:18, he continued, “Never consider yourself higher, better, because then the fall will be harder.” A fighter must give all his strength to his training, and treat others humanely, “and the rest lies in the will of God.”

Previously, Emelianenko has said that he prays before every match and then never feels anger or hatred towards his opponents. He came to faith at the Diveyevo Monastery which is one of the great centers of pilgrimage in Russia, where are the relics of St. Seraphim of Sarov. This Russian Christian Youth Movement Is Growing by Leaps and Bounds
Anna Lutskova De Bacci
An RI writer attended an event of the organization 'Sorok Sorokov' and sends this report.