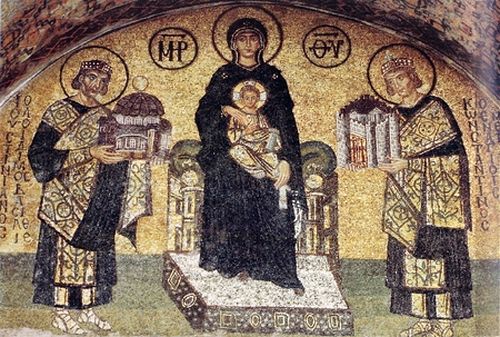 Daniel was called to be a New Joseph to King Nebuchadnezzar. Like Joseph to Pharaoh, Daniel understood dreams and interpreted them for the king. Like Joseph to Pharaoh, Daniel revealed the might of the God of Abraham and led the king himself to conversion. Joseph’s role is as a discipler of nations. By providing wisdom to Pharaoh, he does what Adam was called to do: water the world, make the grain grow, harvest it as Bread, and consecrate it to God as Tribute. Daniel’s role as New Joseph is revealed in the series of visions he has about the coming of the Kingdom. In Daniel 2, we are shown the kingdom of God as an altar-stone transformed into a mountain which gradually fills the whole earth- that’s why the City of God in Revelation 21 is structured as a pyramid. It’s the whole world turned into a holy mountain.

The four successive empires are Babylon, Persia, Greece, and Rome. It is the Roman Empire which is struck and first transformed. We’re given a timeline in Daniel 9, where the final seven years out of Seventy Sevens of Years is marked by the confirmation of the covenant- all of God’s promises are fulfilled. Comparing Daniel with Revelation 11-12 and the Book of Acts, we learn that the last half of the Seventieth Week marks the flow of the gospel to the nations. Thus, the promise of Genesis 12 is confirmed. That is what the Seventy Weeks are driving towards: the conversion of the Gentiles.

That’s what we learn from the biblical history. But the God who providentially oversaw the history recorded in Scripture is the same God who providentially oversees the history of the Church. And if we look, we find that God divinely ordains typological and numerical rhythms in this age just as He did in ages past. Thus, the proclamation by St. Constantine of peace for the Church occurs precisely forty weeks of years after the close of the seventy weeks of years. This is loaded with biblical symbolism. Forty is the number of wandering in the wilderness before coming into the promised land. After suffering persecution for three centuries, the Church now receives an inheritance: the Roman Empire converted into a vessel of the Kingdom of God. During that century, what had been the fourth empire of Daniel 2 is filled by the prophesied holy mountain.

Taken together, the 70 Weeks and the successive 40 Weeks are 110 Weeks. This is the age at which Joseph died, and similarly marks the feeding of the nations of the world with the Bread and Wine of the Gospel. In a real sense, Daniel’s mission is fulfilled in 313. I write this in order to explore the theological weight that the City of Constantinople bears. When Constantine moved the capital of the Empire, this wasn’t a random decision. It was symbolically potent. The Roman Empire had always centered on this City of Rome. By founding another City, Constantine refounded the Roman Empire. The foundations of the old city were laid on the blood of Romulus’ brother. The foundation of the new city was laid on the blood of our Elder Brother, who was not slain involuntarily, but gave Himself up for the life of the world.

This is why the name Constantine gave the city was not Constantinople: it was New Rome. This was the sign of a reborn and baptized Roman Empire. It was a sign of the coming of the Kingdom of God. Throughout the Bible, whenever the people of God experience an exodus, they gather spoils from their defeated enemy and use those spoils to construct a house for Almighty God. This is paralleled in a dark sense by Cain, who slays his brother and goes out to build a city for himself as King. The prophets identify the future House of God with a great City of God. This is symbolic and refers to the citification of the world in Christ. But the building of New Rome reflects this typology in detail.

As Israel in Egypt, the Christians had undergone great oppression in the Roman Empire. But the blood of the martyrs is the Seed of the Church. The blood will always come up before God in the Nile and summon Him to judge. He judged by slaying the Egyptians. And he also slew the Roman Empire- but this time, through baptism. Rome died- but it was also raised in glory. The defeat of Maxentius by St. Constantine at the Battle of the Milvian Bridge evokes memories of Israel’s exodus from Egypt through the Red Sea. Maxentius set a trap for Constantine’s armies on a bridge so that they might fall into the river and drown. Yet, as the Psalmist says: The wicked shall fall into their own net. The plan backfired, and Maxentius and his armies drowned- just as Pharaoh and his troops did in the Red Sea. This event marked the liberation of the Church from its pagan pharaohs.

The spoils of the city of pagan Rome were consecrated to God- with St. Constantine constructing churches across the empire and Christianizing the great Roman culture and baptizing it, so that there are signs of that baptized culture in Catholic and Orthodox churches to this day. But above all, Constantine spoiled his enemies and used those spoils to build a new city, a New Rome. And at the heart of that New Rome was the Church of the Twelve Apostles. As the city of God in Revelation 21 is built with the jewels of the “twelve apostles of the Lamb”, so we find a sign of the Twelve integrated into the heart of this city. Constantinople, the New Rome, is the sign of the fulfillment of the Kingdom of God and its political manifestation. The Tsar of Russia was called “Caesar”- we must recall that in Roman political ideology, the “Caesar” was the junior partner of the “Augustus”, who was the Emperor of Constantinople. The Orthodox Christian vision is of an Emperor ruling from Constantinople, cooperating with baptized kings of baptized cultures from all nations.

This is why Constantinople is more than a memory- it is one of the great signs of the kingship of Christ. And I do believe it will be granted to the faithful once more, if we are worthy and beg God’s mercy. ‘Remember Byzantium’: St Pete lawmaker calls for Istanbul to be renamed Constantinople
“Many residents of our country still connect the city of Istanbul only with the history of Byzantium. Before the Bolshevik revolution, this city was not named other than Constantinople in our country. Today, many Orthodox Christian nations, for example, Greece, maintain this tradition,” Milonov wrote in his letter as quoted by RIA Novosti. Make a wish at one of Istanbul's sacred springs
Referring to sacred springs believed to have healing powers and make wishes come true since Byzantine times, ‘ayazmas' are a part of Orthodox Christians' religious culture, and there are churches in Istanbul that were built above or beside them History Through New Eyes
Seraphim Hamilton
It is time that we see the world through new eyes. Neither God nor His people have sat on the sidelines of history. They both are at the center of history, the goal of which is the birth of Jesus Christ and the divinization of all mankind.
Comments

Anthony3/3/2017 2:18 pm
Constantinople will become Christian and Hellenic again - and within our lifetime - Ayios Kosmas Aitolos, Ayios Paisios, and Ayios Gerondas Iosif Vatopaidinos have prophesied this. You can see their prophecies on Youtube. Mitr, Morfou, Neofytos has done some excellent interviews if you understand Greek:

The Kurdish question will ignite the beginning of the end of what is known as ''Turkey''. War will come to Syria, and it is there that we best start praying very hard. On the back of the war in Syria, Ellas will be next on Turkey's hitlist - things are heating up very rapidly now between Ellas and turkey in the Aegean as I write this. Once international capital withdraws from Ellas - i.e. Ellas leaves the Euro, she will be vulnerable; then Turkey will launch her attack on some islands. Ellas will not bleed but she will starve. Russia will descend and smash Turkey to pieces. The Turks will be forced to withdraw their filthy army from Kypros to defend Constantinople but they will be unable to. The other European powers will then descend upon Turkey to take on Russia, and it is there that the Great Third World War will begin. Ellas and Kypros will, thank God, not partake in this war - everyone who gets involved loses. Following on from this Constantinople will be returned to Ellas, and she will be prosperous again ruled by the God-fearing sleeping king Ayios Ioannis Vatatzis. There will be an outpouring of piety across the world before the final reign of Antichrist.
×