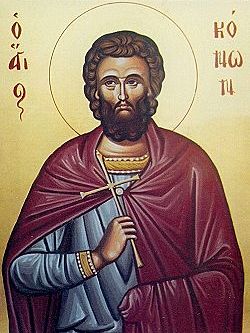 Photo: Days.Pravoslavie.Ru
The Holy Martyr Conon of Isauria was born in Bethany, a village near the Asia Minor city of Isauria, whose inhabitants had accepted Christianity from the Apostle Paul. From his youth, Saint Conon was accorded the special protection of the “Archistrategos” (“Leader of the Heavenly Hosts”) Michael, who appeared to him and assisted him in many difficult circumstances in life.

At the insistence of his parents, Conon was betrothed to a maiden named Anna. He persuaded her to live with him in virginity after the wedding. The young couple lived as brother and sister, devoting themselves entirely to God. Saint Conon brought also his parents to the Christian Faith. His father, Saint Nestor, received a martyr’s death for denouncing idol-worshippers.

After burying both his mother and wife, Saint Conon continued his service to God, devoting himself entirely to monastic works, fasting and prayer. In his declining years the holy ascetic was glorified with the gift of wonderworking. By virtue of his preaching and miracles many pagans were converted to Christ. It is said that even the evil spirits were forced to serve him.

When a persecution against Christians broke out in Isauria, one of the first to suffer was Saint Conon. He was subjected to fierce torments for his refusal to offer sacrifice to idols. When the people of Isauria learned of the tortures to which the saint was being subjected, they came forth bearing arms to defend the martyr. Frightened by the people’s wrath, the torturers fled, and the Isaurians found the martyr wounded and bloodied at the place of torture.

Saint Conon wished to endure martyrdom for the Lord, but he lived two more years. Saint Conon died in the second century and was buried beside his parents and wife.

Armed with the grace of the Spirit, / You crushed the power of ungodliness / And shone forth with miracles. / Dyed in the streams of your blood, O martyr Conon, / You glorify God, who through you grants us grace and great mercy!

Your holy martyrs Conan and Onesimus, O Lord, / Through their sufferings have received incorruptible crowns from You, our God. / For having Your strength, they laid low their adversaries, / And shattered the powerless boldness of demons. / Through their intercessions, save our souls!

Having lived on earth in purity, like an angel, / You were counted worthy to converse with the bodiless hosts. / You brought your parents to the knowledge of Christ / And having confessed the one God in Trinity, / You suffered to the shedding of your blood! / Martyr Conon, ever entreat him for the sake of us all!