This sermon was delivered by the ever-memorable Archbishop Averky (Taushev) of the Russian Orthodox Church Abroad in 1971. Many Orthodox were very concerned about the formation of new, ecumenical endeavors, especially the release of mutual excommunications between Patriarch Athenagoras of Constantinople and the Roman Catholic Pope Paul VI, and the entry of a number of Local Orthodox Churches into the World Council of Churches. Meetings were also being held in preparation for what would finally be called the Council of Crete. 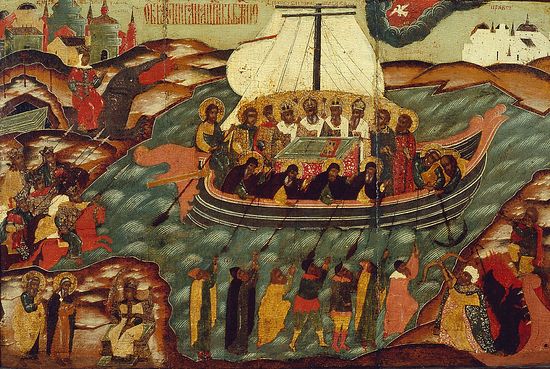 Beloved brothers and sisters in the Lord, you will hear these solemn and significant words in the Rite of Orthodoxy, which the Holy Church has established to be served on this day. The first week of Holy and Great Lent has ended a week of intensified prayer and ascetical repentance. Now the Holy Church, desiring to encourage and console us, has established for us in this first week of Great Lent, on its first Sunday, a spiritual celebration, one most dear and close to our hearts—The Triumph of Orthodoxy.

This celebration was first performed in 842 in Constantinople in the presence of the Blessed Empress Theodora by His Holiness Patriarch Methodius in memory of the overthrow of the last terrible heresy to shake Christ's Church, the heresy of iconoclasm. But in this celebration the Holy Church marks the triumph of the holy Orthodox faith in general, her victory over all impious heresies, false teachings and schisms.

Our Lord Jesus Christ the Savior founded His Church on earth so that all belonging to her could be saved, could elude the nets of the devil and enter into the Heavenly Kingdom prepared for them.

The devil exerted all his strength to overthrow and destroy the Church of Christ and, through this, to hinder the salvation of men. At first he raised up terrible persecutions against the Church by the Jews and pagans. For almost three centuries the blood of Christian martyrs flowed without ceasing. But the devil did not succeed in his task. The blood of the martyrs, according to the apt statement of the Christian apologist Tertullian, became the seeds of Christians. Christianity triumphed over its persecutors. The meek lambs of Christ's flock transformed the wolf-like rage of their persecutors into lamb-like meekness.

But the devil did not resist after the defeat he suffered at the hands of the martyrs. When the Church of Christ triumphed in the world he raised up a new, even more dangerous persecution against her: from within the Church, as the Holy Apostle Paul had foretold in his conversation with the Ephesian presbyters: “Men arose speaking perverse things.” Paul called such men “grievous wolves.” (Acts 20:29,30). These were heretics who tried to pervert the true teaching of Christ concerning faith and piety in order to make this teaching ineffective for men.

When this happened, the Holy Church, in the person of its best servants, took up arms against these heretics in order to defend its true, undistorted teaching. There began to be convoked first local and then ecumenical councils. Bishops came together from all the corners of the earth and through the Holy Spirit they gave voice to the pure and undistorted Truth, following the example of the First Apostolic Council of Jerusalem (Acts 15:6-29). They also cut off heretics from the Church and anathematized them.

This was in accordance with the clear commandment of Our Lord Jesus Christ Himself who said, If he neglect to hear the Church, let him be unto thee as a heathen man and a publican. (Matthew 18:17); and in accordance with the commandment of the Holy Apostle Paul, that great apostle to the nations who said, But though we, or an angel from heaven, preach any other gospel unto you than that which we have preached unto you, let him be accursed (Galatians 1:8). And in another place he states: If any man love not the Lord Jesus Christ, let him be anathema. Maranatha (1 Cor. 16:22).

Thus our moving, majestic and solemn Rite of ORTHODOXY takes its beginning from our Lord Jesus Christ Himself and from his great Apostle, called by Him to be the apostle to the nations, i.e., of the whole pagan world.

From the ninth century on the Holy Church has established that this rite should be served on the first Sunday of Holy Great Lent and that it be named the Sunday of Orthodoxy. This rite, brothers and sisters, is particularly important and significant in the evil times we are experiencing, times in which the Orthodox faith is wavering and shaking.

This wavering and shaking of the Orthodox faith is due to those very persons who ought to be strengthening and supporting it in the souls of the faithful. Those who should be pillars of Holy Orthodoxy high-ranking hierarchs including the heads of certain Local Churches are departing from the Truth of HOLY ORTHODOXY. It is terrible to have to say that even the head of the Constantinopolitan Church, which is known as the Ecumenical Patriarchate, the man considered to be the first hierarch of all ORTHODOXY,1 has set out this path! On all of this there undoubtedly lies the print of the apostasy about which the Holy Apostle Paul foretold (2 Thess. 2:3) the apostasy of Christians from Christ.

We are now face to face with this apostasy. The major threat to true Christian faith, the Orthodox faith, is the so called “Ecumenical Movement,” headed by what is known as the “World Council of Churches,” a body which denies the doctrine of the unity and infallibility of the True Church of Christ and attempts to create from all the presently existing and distorted the faith, a new false Church, which, from our point of view, will without any doubt be the Church of Antichrist, that false church that the Antichrist, whose coming is now being rapidly prepared in the world, will head.

From the teaching of the Word of God and the Holy Fathers of the Church we know that the Antichrist will be both the religious and political leader of all humanity: He will stand at the head of a new universal false church which the Antichrist, whose coming is now being rapidly prepared in the world, will head; he will also be the director of one new world government and will attempt to submit all to his absolute power.

The Orthodox faith—this is the faith of the Apostles, the faith of the Fathers, it is that faith which the Apostolic Fathers, the direct disciples of the Holy Apostles, and the Holy Fathers and Teachers of the Church and their lawful successors, established by the Holy Spirit, interpreted for us in their marvelous and inspired writings.

Brothers and sisters, we must hold this faith steadfastly if we desire eternal salvation!

Now we shall celebrate with you this deeply instructive, moving and highly solemn rite which consists of two parts: The first part is the prayer of the Holy Church for all those who have gone astray or fallen away from the true Orthodox faith; in the second part the Holy Church pronounces the dread anathema against all false teachers, heretics and schismatics who have grown stubborn in their malice and who do not wish to reunite with the true Church of Christ but instead struggle against her. The Triumph of Orthodoxy Sunday
Lenten Synaxarion
On this first Sunday of Great Lent, the Sunday of Orthodoxy, the Church of Christ celebrates the restoration of the holy and venerable icons by the Emperor Michael, the holy and blessed Empress Theodora and the Holy Methodius, Patriarch of Constantinople. On the Sunday of Orthodoxy
St. Luke, Archbishop of Crimea

On the Sunday of Orthodoxy
Sermon given on the First Sunday of Lent
St. Luke, Archbishop of Crimea
Really, did the Lord Jesus Christ, who we glorify amd who we venerate in icons, not living among us? Did the Virgin Mary, who was painted by the apostle and evangelist Saint Luke not live among us? This icon was blessed by the very Theotokos herself, saying that grace would always be with this icon. Do you know how many miracles happen from icons of the Virgin Mary?
Comments

Anthony3/5/2017 5:31 pm
And on this Great and Holy day, let us all pray with one heart that the latest heresy to wrack our Mother the Church, namely that of accursed Ecumenism, along with its promulgators and their futile attempts to pollute our unadulterated faith be brought to nought. And very quickly at that. May those who seek to destroy our faith - the wolves from within starting at the very top in the patriarchate of Konstantinopoleos recognise the futility of their attacks on our Faith and repent sincerely of their wretchedness.

May God bless all those who have stood firm on the path of Truth, from times past through to the present time. Let us pray in particular for the three anti-ecumenist ''ringleaders'' Pater Theodoros Zizis, Mitr. Pireaus, Seraphim and Mitr. Kalavriton kai Aigialeias, Amvrosios - singled out by the delusional Phanar for excommunication, with Mitr Amvrosios furthermore facing court action by the lawless Greek state for speaking out in defence of Traditional Marriage.

The battle is already won. Orthodoxy has and always will prevail.