Liturgy in the New Church at Sretensky Monastery

In 2015, Sretensky Stavropegic Monastery in Moscow began construction on a new cathedral dedicated to the New Martyrs of Russia. The church is near completion, according to schedule, and will soon be consecrated at a solemn Liturgy. His Holiness Patriarch Kirill has finalized the date of the consecration, and the monastery abbot, Bishop Tikhon of Egorievsk, has made a formal announcement concerning this important event and another liturgical event scheduled next week, which will initiate the solemnities.

Many are waiting with great expectation for this day, and soon it will be here. OrthoChristian.com will be posting more coverage of this history in the making. 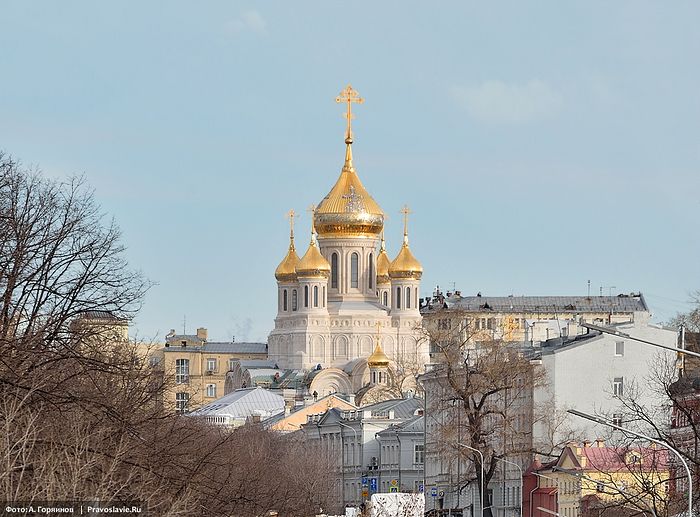 When we began building the church in honor of the Resurrection of Christ and the New Martyrs, we were preparing to celebrate the first Divine service in it on the one-hundredth anniversary of the tragic events of Russian unrest. On March 2, 1917 (March 15, new style) the conspirators forced the Tsar-Passion Bearer Nicholas II into abdication. One hundred years later we are meeting this day with reflection upon our history, reflection upon the path we have traversed, and with glorification of the New Martyrs and Confessors of Christ the Savior.

His Holiness Patriarch Kirill has blessed the consecration of the new church to take place on the feast of the Ascension, May 25, 2017. This day will mark the tenth anniversary of the reunification of the Russian Orthodox Church of the Moscow Patriarchate and the Russian Orthodox Church Outside of Russia. It was precisely on Ascension ten years ago that the document of canonical communion was signed.

But His Holiness the Patriarch has also blessed us to celebrate the first Liturgy on March 15 as scheduled, on the portico of the new cathedral, on a spot specially constructed for the Divine service under the open sky.

March 15, the day of the “Reigning” Icon of the Mother of God, falls on a Wednesday of Great Lent, and therefore there will be a Liturgy of the Presanctified Gifts. According to the tradition of Sretensky Monastery, Wednesday Lenten liturgies are served in the evening, at 6:00 PM.

As March is not yet a warm time of year at our latitude, do not forget to dress appropriately. Weather forecasters are not calling for rain that evening. In the Presanctified Liturgy there are prostrations to the ground, so you may bring something with you to lay under your knees. In such situations, the Old Believers use a special mat, but you can use even a plastic bag.

Note that, according to the statutes of the Church, those wishing to commune in the evening must fast from food and drink from 12 a.m. However, in accordance with the Holy Synod’s resolution of November 28, 1968, if such a fast is difficult for health reasons, you may abstain from food and water from 12 PM.