The “Troublemaker” Who Became a Saint 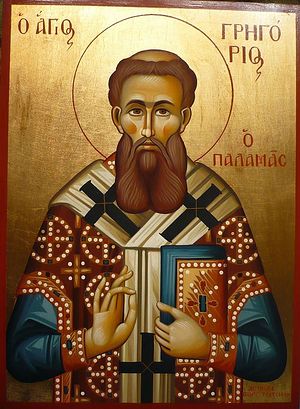 He was raised in Constantinople in a wealthy family. His family was even friends with the Emperor; but from a rather young age Gregory was inclined to the life of the Church. It was no surprise because his parents loved the Church and frequently invited clergy and monks to come and spend time with them. As a young man Gregory left the comfortable life and traveled to Mt. Athos in Greece to be trained in the ways of prayer as a monk. He dedicated his whole life to God because he loved God and wanted to spend all his time in the service of God. He grew wise and strong through prayer under the guidance of some experienced holy men.

Unfortunately due to time constraints I can't tell you all of his story, but I will tell you that he advanced and gained the rank of abbot, and became a leader of a monastic community as well as a very respected elder on the Holy Mountain (Mt. Athos). The real trouble began when a very gifted speaker and teacher, a monk from Italy, visited Mt. Athos. This monk was Barlaam. He taught the monks that,

He believed the monks on Mount Athos were wasting their time in contemplative prayer when they should be studying. He ridiculed the ascetic labor and life of the monks, their methods of prayer, and their teachings about the uncreated light experienced by the hesychasts. Countering the traditional stance of the Church that “the theologian is the one who prays,” Barlaam asked: “How can an intimate communion of man with the Divine be achievable through prayer, since the Divine is transcendent and ‘dwelling in unapproachable light’ (1 Timothy 5:16)? No one can apprehend the essential being of God!” Barlaam was convinced that God can be reached only through philosophical, mental knowledge—in other words, through rationalism.” AGAIN Vol. 27 No. 1.

So this led to a great dispute among the monks and especially between Gregory and Barlaam. Why such a dispute? Because Barlaam was teaching that we learn and experience God through knowledge. That we know God in the head first. This was a type of rationalism. It is the belief that the only proper way to know things is through reason. This led to many of the problems in Western Christianity and led ultimately to the Protestant Reformation. The problem is that essentially it means that we know God only through logic as if God were a mathematical equation. It ignores the fact that for centuries illiterate but holy men and women, have had true experiences of God through the life of the Church. In addition it means that Barlaam thought that what was experienced by the monks through prayer was not actually a real, genuine experience of God but a lesser experience of something created by God, which he called “grace”.

We are told that Barlaam traveled to Constantinople and stopped at the monasteries. He refused to attend Vigils, to pray or fast, and did not trust in spiritual experiences. In short, he behaved much like modern Christians, even so-called Orthodox Christians. He caused a division throughout the Church with his improper teachings and then blamed it all on Gregory. This sort of thing has happened before and will probably happen again.

Knowing God is not theoretical—it is an actual experience. Gregory Palamas taught that we could certainly know God. He made an important distinction. He said that there were two sides to knowing God. One was to know God's essence. This is impossible for any human being. No human has ever seen God. No one can grasp His greatness or His glory. On the flip side, Gregory taught that we could know God through His energies: the way that He clearly acts through our world and visits us. He compared knowing God to the Sun. God is like the Sun. This Sun can never be grasped or even looked at closely. It is impossible and yet we can receive the energy from the Sun. We feel the warmth of the rays, we experience the light and heat.

St. Gregory suffered and was imprisoned more than once for defending his understanding of the faith in the living God. We may one day have to be courageous enough to suffer for our Christian faith. You can't prepare by stocking guns and ammunition. You can prepare by loving your neighbors and by stocking God's words in your heart, and by becoming men and women of prayer and teaching this life of prayer to your children. St. Gregory teaches us that it is possible to soak up God's rays of love and blessings through genuine communion that is possible through the struggle to reach fervent prayer. It doesn't happen automatically, but comes by the grace of God. God wants to affect us through prayer; prayer is not meditation or an intellectual exercise. It is communication with the Divine.

Today we are reminded that we can experience God, that He is not a theory hidden in a book. Education and degrees only go so far, the experience of pure prayer is a true teacher. Right now as we've been struggling for a few weeks we are inclined to think… it is not worth it. Why fast, why pray more, why attend extra services, why do any of this? St. Gregory answers us: these things open us up to receive the love and the grace of God, which will dwell in us through our union and communion with the Holy Spirit.

So keep struggling; it is indeed worth it. Glory be to God Forever AMEN. Can we actually experience God?
Fr. James Guirguis
This Second Sunday of Great Lent teaches us so much. We learn that the work of the body is important work. We learn that we are saved together as an integral whole, body, mind and soul. We learn that when we harness our hearts, minds and souls to agree on working together towards knowledge of our Creator, we are then able to truly share in the benefits of the title “Child of God.”