The Saints Rejoice in Moscow 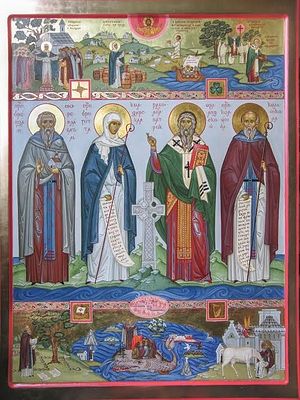 With this, the Russian Orthodox Church has recognized what She has always proclaimed, that the Orthodox Church is the only Church, that there is no such thing as saints outside the Orthodox Church, to which belong therefore all the saints venerated by the Orthodox faithful in the West up until 1054. That is when the leaders of the Church in Western Europe took Her into schism and ending Her existence, founding Roman Catholicism, which, as is known, later spread into a myriad of protesting branches and sects.

The fact that Roman Catholicism and even some of its other branches venerate Orthodox saints does not in any way mean that those saints are not Orthodox. We should rejoice that Roman Catholics and others venerate the Apostles Peter and Paul, who were martyred in Rome, the Protomartyr of Britain, St. Alban, St. Patrick, the Enlightener of Ireland or St. Genevieve of Paris. They are venerating Orthodox saints. We know from pastoral experience over many decades that such heterodox even find their way into the Orthodox Church in this way, through the saints of the lands in which they live. Glory be to God! The local saints are wonderful missionaries, even in our own days.

Of course, there is nothing new in finding saints of the West in the Russian Orthodox calendar. Look at St. Tatiana of Rome, or St. Irenaeus of Lyon, St. Julian of Le Mans (Cenomansis), St. Alexei the Man of God, St. Hilary of Poitiers (“Piktavijskij”), St. Ambrose of Milan, St. Cassian of Marseille, St. Leo the Great, St. Gregory the Dialogist, both popes of Rome, and a host of others. They have always been in the Russian Orthodox calendar. So has St. Athanasius of Alexandria, who wrote his Life of St. Antony the Great while in exile in Trier in modern Germany. So has St. Symeon the Stylite who corresponded with St. Genevieve of Paris. 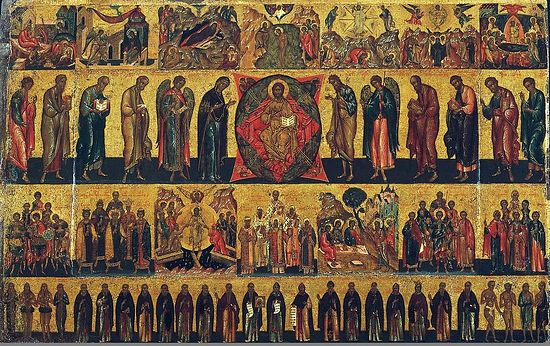 Icon of All Saints

True, there may be some of a pharisaical, chauvinistic and even neo-pagan mentality, who do not like having non-Russians in the Russian Orthodox calendar. Such people will certainly have to exclude from their calendars Christ Himself, the Mother of God Herself, as well as the Apostles, St. Nicholas the Wonderworker, St. Basil the Great, St. John Chrysostom and thousands of others from the Church calendar—after all, none of them was Russian. And they would also have to exclude from the Church calendar, St. Olga and St. Vladimir, who were Scandinavians, as well as the Tsar-Martyr Nicholas II, who was only 1/128th Russian by blood, not to mention the Tsarina Alexandra, who was German.

We have always believed that the Russian Orthodox Church, alone of all the Local Orthodox Churches, is multinational. All the others are mononational, looking after only their own nationality, Romanian, Greek, Serb, Bulgarian, Georgian, etc. If this is the case, and such great figures in Russian history as Patriarch Nikon, Dostoyevsky, Metropolitan Antony Khrapovitsky and saints like St. Seraphim of Sarov, St. John of Kronstadt and St. John of Shanghai, who all saw for Russia a universal, messianic mission in these last times, are right, then let chauvinists, pharisees and neo-pagans cease expressing their ignorance of Church history. Their “Church” appears to be divided, unholy, nationalistic and anti-apostolic, but our Church is One, Holy, Catholic and Apostolic. From Fragments to Wholeness
Archpriest Andrew Phillips
A host of silent questions arose in my mind. Why did they, such humble representatives of the people show such respect here? Who was this St. Edmund, that this town had been named after 1,000 years before? What was a saint? How did you become a saint? Why were there only ruins here now? And why were there no longer any saints? So many questions, so few answers and none able to answer them. damjan3/15/2017 11:23 pm
Excuse me, but it is NOT true that Serbs do not mention and recognize other saints than just Serbian ones. A classical example are Seraphim of Sarov, John of Kronstadt and others too numerous to mention. Their names are remembered and read out aloud on their day in the calendar at the proper place near the end of Holy Liturgy along with the Serbian ones.
×