Right-Believing Prince Daniel of Moscow: “God Has Not Forgotten Me” 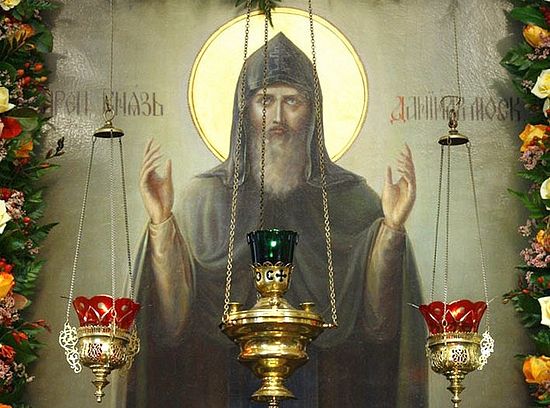 The forefather of Muscovite princes and tsars, holy Right-Believing Prince Daniel Alexandrovich lived in difficult times. Having received the modest inheritance of Moscow, he was compelled to fight his brothers for the great princedom. In those days, the military skill of a prince and his retinue, together with political cunning were, it seems, the only necessities for survival. Only thus was he able to resist his brothers’ cunning and the savagery of his enemies. However, holy Prince Daniel managed to find a weapon, a force which not even the most solid historical logic can withstand. After all, this quiet leader of a humble and periphery inheritance should have remained forever a little-known prince, whose possession would sooner or later be divided by powerful neighbors. But it turned out differently: The stone which the builders rejected, the same is become the head of the corner (Mt. 21:42).

There are in the history of Christianity and in the history of Russia moments which we would like to remember forever—both in assessments of what is happening in the world and in relation to the life of a concrete person. For, once, 2,000 years ago, humble fishermen from a small Roman province overcame the whole world. And for 300 years their followers were exterminated, were misunderstood and driven out; however, in the end they prevailed against all logic by patience and meekness.

We see the same thing in the life of Right-Believing Prince Daniel of Moscow. In 1282, together with his brother Andrei and other princes, he came out against another brother, Dmitry. However, at their first meeting at the city of Dmitrov, thanks to the efforts of the saint, a peace was concluded without bloodshed.

When in 1293 St. Daniel’s brother, Grand Prince Andrei Alexandrovich, together with conscripts from the Tatar Hordes with Dyuden at the head (“Dyudenev’s army”) were ravaging Russian cities, the right-believing prince decided to allow them into Moscow to preserve the people from destruction. The saint brought the enemy the keys to the city to avoid bloodshed, and together with his people, he survived the barbaric attacks.

In 1300, when St. Daniel crushed the treacherous prince of Ryazan with his Tatar collaborators, he did not use his victory to take others’ land or to take rich spoils, as was customary in those days, but gave an example of true selflessness, love, and brotherly love.

In 1302, Prince John Dimitrevich of Pereyaslavl gave his princedom to the Right-Believing Prince Daniel. After Rostov, the Pereyaslavl lands together with Dmitrov were first in number of inhabitants, with the strongest fortress. Pereyaslavl-Zalessky was well defended from all sides. But the holy prince remained loyal to the then-modest Moscow, and did not transfer the capital of the princedom to the stronger and the then-more important Pereyaslavl… 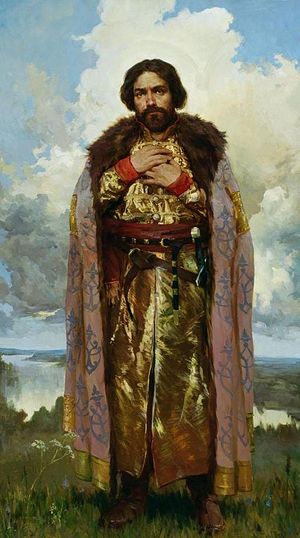 In the life of the holy prince compiled by him, Metropolitan Platon of Moscow writes of the great work of this ascetic of piety: “This original founder laid the foundation of Moscow’s present greatness, laying for it by his peaceful steps but a small path.” And here is recalled a story from the Old Testament. Elijah, the great prophet, in a difficult time for him when the Israelites persecuted him and worshiped idols, besought the Lord to appear to him. The prophet was given such an answer: “Go out, and stand on the mountain before the Lord.” And behold, the Lord passed by, and a great and strong wind tore into the mountains and broke the rocks in pieces before the Lord, but the Lord was not in the wind; and after the wind an earthquake, but the Lord was not in the earthquake; and after the earthquake a fire, but the Lord was not in the fire; and after the fire a still small voice (3 Kg. 19:11-12).

And truly, the greatness of the work, by the completely meek and humble disposition of the right-believing prince, demonstrates that God is not in power, but in truth. After his death, the saint himself testified that he conquered the world by the love of Christ. Many years later, in the time of Grand Prince John III (1462-1505), St. Daniel appeared to a youth of the grand prince’s entourage and said, “Say to Grand Prince John from me: ‘You console yourself, but you have forgotten me; but God has not forgotten me.’” And in these words, despite the logic of all events, of the political condition, and of an historical perspective, is inscribed the victorious sign of the right-believing prince: “God has not forgotten me…”

The life and labors of the holy Right-Believing Prince Daniel of Moscow are an example of true Christian courage for us, worthy of the memory not only of rulers and politicians, but even the most ordinary Christians. It was courage—to love against all odds and to remain faithful to the evangelical commandments when the logic of events happening around us negate it. History again and again justifies the truth that the most solid foundation for every work is the rock of the love of Christ, for Blessed are the meek, for they shall inherit the earth (Mt. 5:5). Dmitri of Uglich and the Three False Dmitris: One of the Most Bizarre Episodes in Russian History

Dmitri of Uglich and the Three False Dmitris: One of the Most Bizarre Episodes in Russian History
Dmitri ‘rose from the dead’ one last time in the person of False Dmitri III. This Dmitri gained the support of the Cossacks in the east, and was proclaimed Tsar in 1612. However, only a few weeks into his ‘reign,’ False Dmitri III was captured, sent to Moscow, and executed. This was the end of the parade of frauds claiming to be the poor young (and dead) heir of Ivan the Terrible, and Dmitri of Uglich was finally able to rest in peace.