A sermon at the Presanctified Liturgy at the Church of the Resurrection of Christ and the New Martyrs and Confessors of the Russian Church at Sretensky Monastery, March 15, 2017 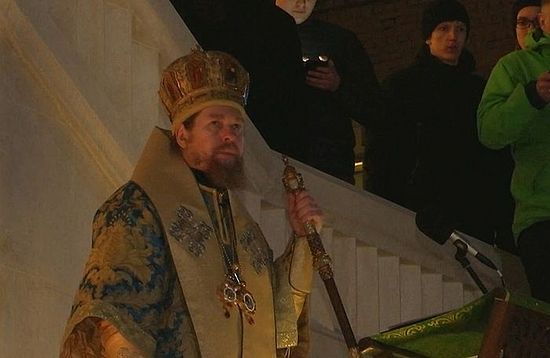 We know what a special day today is. It is the day when the Queen of Heaven, giving us the sign of her “Enthroned” Icon, providentially took the scepter of power over our Fatherland, over Russia, fallen from the hand of the last representative of a three-hundred-year dynasty, the Holy Passion-Bearer Nicholas.

When we began to erect this church, we prayed that the Lord would bless us to come to the end of the work on precisely this day, the centenary of the beginning of the perhaps most tragic events in the history of our Fatherland, the beginning of that path of trials, which, by the grace of God, our people have overcome; those trials which did not break them; and those trials which led the descendants of many, who at one time had renounced God, to Christ, and to the triumph of the Resurrection of Christ.

The church is named in honor of the all-conquering Resurrection of Christ and in honor of the faithful disciples of the Lord Jesus Christ, His holy New Martyrs and Confessors. The Lord has fulfilled the desire of our hearts. And today, on the anniversary, significant in that we comprehend the path traversed by our country and people, we heed the lessons we should extract, and we understand the main thing: all is in the hands of God alone. The Lord takes us down into hell, and He raises us up. This is what happened with our Fatherland, lowered into Hell and raised up again to the Resurrection of Christ, to the resurrection of a life in God for many millions of our countrymen.

God’s lessons are at times very heavy. God’s lessons lie in the fact that He endures the carelessness, cowardice, and infidelity of the people for a long time, but then comes the moment when the careless ones themselves and their descendants must settle their account with bitter but saving trials.

We commemorate today the holy New Martyrs, but we do not know just how many unknown martyrs there were, who at one point departed from the Church and the faith, but thanks to their trials and martyric path returned to Christ, even, perhaps, in their last minutes. They returned and found the meaning and purpose of their whole life—union with God; union with Christ.

This happened just as it did on Golgotha with the thief: nailed to the cross, in his last minute he did that which he could, pronouncing from his whole heart but a few words: Remember me, O Lord, when Thou comest in Thy Kingdom. No asceticism, no lifelong piety—only the sins of apostasy, treason, cowardice, and deceit, as Tsar Nicholas Alexandrovich said. But likewise, probably many of our fellow countrymen were able to say of themselves that they were guilty of apostasy, cowardice, and deceit, in regards to the Church, in regards to Christ, in regards to the historical path of Orthodox Rus’—a path which they knew, but neglected.

There are practical lessons here for all of us. We celebrate the glory of the holy New Martyrs, cursed and rejected by this age, mocked and tortured by their contemporaries. Our recollection is a kind of icon here on earth of that which occurs in the Heavenly Kingdom. Our recollection is but a small reflection of that glory which people have in the Heavenly Kingdom. They were few, but they were right, being the ones who chose the true path, because they chose the Way, the Truth, and the Life—Christ. Despite that seemingly everyone around them screamed, “Leave Him! Depart from Him and you will live!” they spoke otherwise: “We will seek God, and our souls will live.”

This is a high spiritual lesson. It is a practical lesson. It’s not from the holy fathers, not from the ascetics of piety, but is taught by our contemporaries, by looking at what occurred then in 1917. One such person—a non-Orthodox man, and I don’t even know whether he was Christian—the French ambassador in Petrograd Maurice Paleologue said, “It is amazing. I know no other people more suggestible than the Russians.”

Those who welcome the overthrow of the autocracy as if they were convinced of the rightness of their actions, as with delight shouted out, “Hurrah!” (the secular form of “Hosannah”), as to convince everyone and themselves, that finally everything is changing, the most deserving people are coming, that the kingdom of happiness and righteousness will ensue. Within a few months these same people were horrified and crying tears of blood, because their country, which by their participation was handed to those most worthy and elected, collapsed. Russia was practically gone already by the summer of 1917—this is what those who, violently aspiring to power, self-righteously asserting and religiously believing that they knew how to do things better, did to it.

It turned out that to manage the Russian state is very, very difficult. The country collapsed and fell into the hands of antichrist, of his forerunner. Who placed Russia and its people into the hands of the forerunner of the antichrist? Those who loved Russia endlessly, as they said. And we should say, they weren’t lying. All those actors in the dastardly plot—soldiers, aristocrats, Duma members, the intelligentsia, and the people—shouted on every corner, “We’re doing all this for Russia! We are ready to die for it!” And they later proved their love, sometimes even unto death as part of the White movement.

But in the end, these same people, endlessly loving Russia, placed the country into the hands of that man who declared, “As for me, good sirs, I spit upon Russia.” These words belong to that man whose body lies even until today on Red Square. This is what those who were then called the hope and best of the country did with their great love for the Fatherland.

These lessons should be imprinted in our minds and in our hearts. We can never again allow something like this to happen. Now, thank God, we do not have the preconditions for such a thing. But everything can change in the blink of an eye, if the members of Christ’s Church turn out to be so only in appearance. Then the Spirit of the Lord will depart from them.

I would like to thank all of you on behalf of the whole brotherhood for today’s service. I thank the brothers of our monastery for their labors in building and adorning this church. I would like to express my gratitude to the whole construction crew, the architects, the amazing artists, and the engineers. I thank all of you that by your labors and prayers we are able to celebrate such a wonderful service precisely today.

Probably it is no accident. The first service here in Sretensky Monastery, on the Meeting of the Lord in 1994, was also held outside, as we remember. And this first service before our new church was not intentionally planned, but it so worked out, also under the open sky, in the great church of God’s world, in which we all live.

I would like to thank the choir and all the students, and again, and again our parishioners. May God help you and strengthen you in faith, and may the Queen of Heaven protect you. Liturgy of the Presanctified Gifts at the New Church of Moscow’s Sretensky Monastery
Photogallery
The Divine service was celebrated under the open sky. Two thousand Orthodox Christians gathered this evening at the Lord’s Mystical Supper. Atone for sins of revolution by building kind and just society—Patriarch Kirill
Patriarch Kirill of Moscow and All Russia has called upon all Russians to build a good and just society as a means of repenting of the sins of the past. He broached the topic in connection with the centenary of the February Revolution after the Sunday Liturgy in Moscow’s Christ the Savior Cathedral. The New Martyrs in Bronze

The New Martyrs in Bronze
Photogallery
The Moscow sculptors Vitaly Shanov and his wife Darya Uspenskaya are working on the cathedral doors. These doors will consist of a large poured bronze bas-relief, filled from edge to edge with ornamental figures, saints, angels, and text.
Comments
×