The Venerable Poet on the Prose of Life 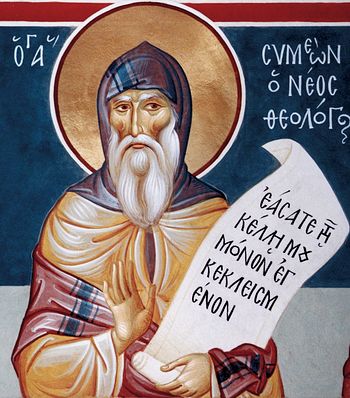 We rarely find descriptions of mystical experiences in our spiritual Tradition. Ascetics would mainly write to inexperienced people, for whom it was necessary to explain foundational truths about repentance and the battle with the passions. It would be inappropriate to discuss high experiences in such instances. It is rare that one of God’s chosen ones would reveal his mystical experience. There was a specific reason: ascetics feared the imperceptible demonic suggestion of a proud thought.

But even so, our Tradition testifies to a genuine mystical experience, including from the lips of St. Symeon. It’s not in vain that we call him “Theologian.” This is not an indication of education received and “professional affiliations,” but of experience in the high life in God, of knowledge of the mysterious truths of the spiritual life, and of knowledge of God. And he wrote about mysticism. Why? Perhaps because he was a poet. After all, poets write about their experiences more openly than non-poets.

By the grace of God, this openness brought no spiritual harm to the venerable poet. Obviously, he well knew his own infirmities and the strength of Christ. Obviously, humility protected him from vainglorious thoughts. How good it is that he did not have his head in the clouds, but found his place in life, daily working on himself and not dreaming of future greatness.

There are considerations of both high and more ordinary things in St. Symeon’s hymns. These reflections put the mundane into a spiritual perspective, prompting me to think about who I am, and whether I have found my place.

Let me give you a lengthy quote from St. Symeon: “It’s impossible to harvest the fields with a shovel, or to hammer with a sickle, or to build with a knife, or to dig with a saw… but each [instrument] must be used for its own [work]… and God created us [so that] every true man would perform his own work in life: some He gives to teach, others to learn… to others [He gave] to prophesy… others He showed to be primates—they’re [all] spiritual gifts. But let’s name the other gifts of the Trinity… one He created strong in body… another with a better voice than others. And in fact, He gave to every person that gift and privilege which he deserved… Therefore, everyone is suited not to that craft that he desires, but to the one for which he was created.”1

These words of the ascetic on human labors are read as a commentary on the Gospel parable of the talents. The Lord gives each of us a talent, a gift. Sometimes it’s hard to understand what kind of talent I have. How often parents direct their children in their own footsteps without considering that the child’s ability is in another sphere. How often we choose a profession for ourselves on the basis of its prestige. And after thirty years of going to a job we didn’t want, we begin the agonizing search for ourselves, for our path. Thank God if someone will understand wherein his talent lies, and will occupy himself with this work, for which he is honored. He will see that there are real, tangible benefits from his labors, and he will thank the Creator.

The given quote from St. Symeon should be continued, but now I will paraphrase the words of the saint, close to the text. “How can you think anything, or act with Divine strength?” he asks.

God gave me a mind, which He deemed necessary; He gives to think about the good; He gives strength to act according to His will. If I do His will, then He will give more gifts, more talents. If I neglect what little I have, then I forfeit that which God entrusted to me.

This allows us to speak about human labor in light of God’s providence.

How wonderfully St. Symeon elucidates for us the Holy Scriptures and the will of the Trinity. And the word of Christ, interpreted by the New Theologian in wise simplicity, transforms the tedious prose of our lives, spiritualizing our daily work. Understanding the Bible Through the Fathers, Part 3: About the Fathers
Dr. Jeannie Constantinou

Understanding the Bible Through the Fathers, Part 3: About the Fathers
Dr. Jeannie Constantinou
We continue with the final part of Dr. Jeannie’s introduction to her Bible studies podcast, “Search the Scriptures”, in which she explains why we trust the Fathers’ interpretations of Scripture, the differences between Orthodox Fathers and those of the Roman Catholics, what it means to understand something “according to the fathers,” and other important points relevant to the study of Holy Scripture. Understanding the Bible Through the Fathers, Part 2
Dr. Jeannie Constantinou Understanding the Bible Through the Fathers
Dr. Jeannie Constantinou

Understanding the Bible Through the Fathers
Dr. Jeannie Constantinou
Perhaps many of our readers have heard of Dr. Presbytera Eugenia (Jeannie) Constantinou, whose “Search the Scriptures” podcasts on Ancient Faith Radio have been so instructive to Bible studiers with busy lives. OrthoChristian.com has begun the work of transcribing these very helpful podcasts, and during this Great Lent we will be posting Dr. Jeannie’s talks on the trial and crucifixion of Christ. The Fathers and Us
Metropolitan Saba (Esber)

The Fathers and Us
Metropolitan Saba (Esber)
For the fathers, the faith supposes that we do not "cherry-pick" their teachings. That is, we do not take teachings and sayings from here or there to prove an idea that we hold or to refute a position that we think is deviant. Rather, we deal with them with what the theologians of our Church call "the mind of the fathers" or "the patristic context."
Comments
×