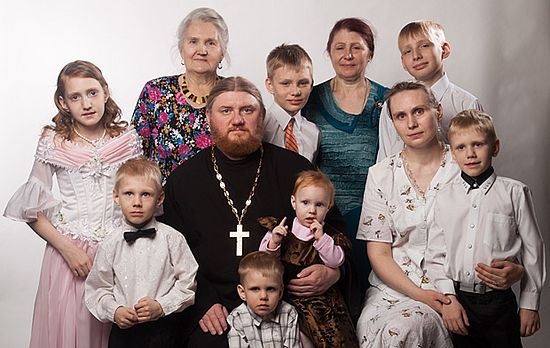 The Russian Ministry of Labor has indicated that the number of large families in Russia has increased by more than a quarter in just the past six years, reports pravoslavie.fm. Families with three or more children are officially considered “large families.”

According to the latest population census, conducted in 2010, there were 1,250,000 large families in Russia. Today, that number has increased significantly, by more than 25%. According to an assessment at the beginning of 2017, the number has risen to 1,566,000 such families.

In Russia today there are 1,233,000 families with three children, 233,000 with four children, 95,000 with 5-7 children, 5,000 with 8-10 children, and 929 families with eleven or more children. The government is now preparing unified federal criteria for large families and a new package of measures for supporting such families, which should contribute to further increasing their numbers and increasing the general population growth.

“This trend is shaped by effective state support. This happens when people with two children understand that there is every possibility to expand, when there is confidence in tomorrow. They give a vivid example of what is necessary for having large families,” said the Deputy Chairman of the Public Chamber’s Commission on the Protection of Family, Children, and Maternity Pavel Sichev.

The Orthodox Church has always understood that childbirth is one of the main purposes of marriage. The wedding service contains several prayers petitioning God to grant that the new couple be blessed with many children. The Russian Orthodox Church’s text “The Basis of the Social Concept” teaches, “In defining their attitude to the non-abortive contraceptives, Christian spouses should remember that human reproduction is one of the principal purposes of the divinely established marital union. The deliberate refusal of childbirth on egoistic grounds devalues marriage and is a definite sin.” Number of abortions in Russia halved in four years