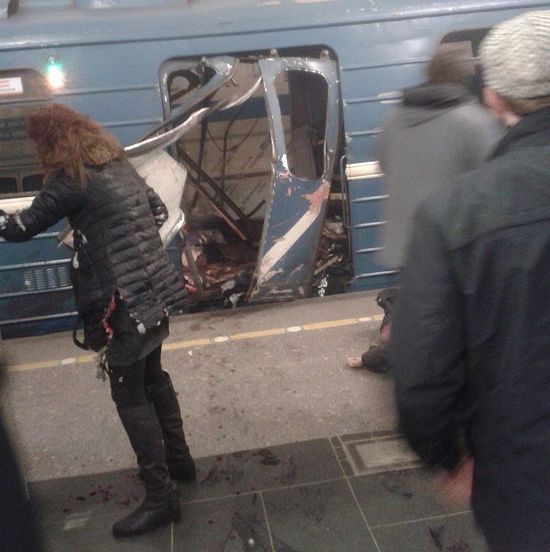 The St. Petersburg metro station was attacked by exploding shrapnel-filled devices this afternoon, leaving at least ten dead, The Telegraph reports. Pictures posted on social media show the door of at least one subway car blown out. Other images shows passengers lying on the platform of a St. Petersburg station.

Media reports have indicated that there were two explosions. The first reportedly occurred at the Sennaya Square station, and the second occurred at around 2:40 at the Sadovaya station on the blue line of the St. Petersburg metro. Reports thus far state that ten dead and fifty injured have been confirmed by Russia’s anti-terrorism committee.

The entire St. Petersburg metro has been closed, and the Moscow metro is taking additional security measures.

President Vladimir Putin is in St. Petersburg today to meet with Belarusian president Alexander Lukashenko. The president has been informed and has expressed his condolences. Authorities are considering all possible causes, including terrorism, President Putin stated.

“People were bleeding, their hair was burned. We were told to move to the exit, because movement had stopped… People just fled. My girlfriend was in the next car that exploded. She said it began to shake. When she came out, she saw that people were mutilated,” one eyewitness has stated. Save Europe From Terrorism - Go to Church
Iben Thranholm
Why is Europe unable to defend its people against terrorism? Terrorist bombing in Volgograd: mother shields her child with her body and is blown apart by explosion
At approximately 12.45 on Sunday 29 December 17 people were killed by a suicide bombing at the central railway station in Volgograd. At that time the railway station was particularly crowded. After three trains had been cancelled many passengers were crowded in the waiting room.
Comments

Anthony4/3/2017 8:51 pm
Do any of the Amerikans or Britishers know if this atrocity was committed by their countries' allies - you know the ''moderate rebels'' that their countries have armed to destroy Syria etc. and which the Russians have been fighting? Loads of quezzies they will hopefully answer in due course for us. Condolences and prayers with our Russian brothers.
×