The Irish soldier who became an Orthodox priest 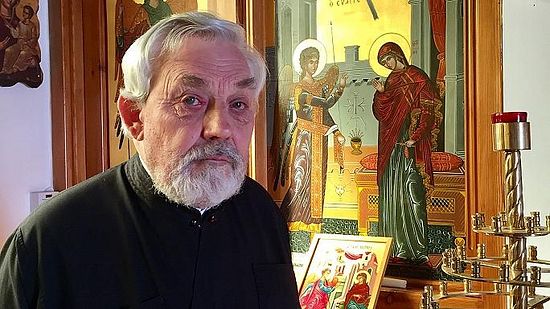 Father Thomas Carroll is a 70-year-old priest in Dublin, Ireland.

He grew up rural county Tipperary, in a family with strong military ties. His father fought in Gallipoli, while his great uncle was at the battle of Thessalonica during the first World War.

Growing up in a Catholic secondary school, he felt called to take holy orders but was told he was not ready, so he followed the family tradition and joined the military.

“We seem to be a family that was always involved militarily. There was discipline among us, but the rules were not too strict. Yet, I could never consider myself a free spirit,” he recalls.

It was while serving in Cyprus with the UN in the 1960s that Father Carroll’s life, vocation and future were set on a path that led him to a narrow brick-built church in the centre of Dublin. A church which stands out from others in the city because of richly gilded decorated screen which separates the altar from the nave, but also because it is orthodox.

To prevent its servicemen being influenced in anyway, the UN did not permit any interaction between them and either communities. However, Father Thomas could not entirely follow the discipline, that both the peace keeping forces and his family have edified him.

“I had a few acquaintances with Cypriots, but the only person that I had a lot of communication with, was a Greek orthodox priest in a village,” he recounts. Father Thomas would meet up with him on a regular basis, to talk about theology and argue regarding everything around it.

“We often could not agree on anything, but he left a lasting impression on me,” he continues.

That prompted him to explore the Orthodox religion further, but when he returned to Ireland there were only a handful of Greeks and Cypriots living in the country. They did not have an established community, so nobody could help him.

Read the rest at Euro News... Massive Celtic cross discovered in Ireland forest
The cross is made of thousands of trees, and stretches a hundred meters long and seventy wide. A Gift of Hospitality—Saint Brigid, Abbess of Kildare
Commemorated February 1/14
Mary Dugan Doss
The life of Saint Brigid of Ireland offers us new insight into the virtue of hospitality, the cheerful, generous giving of food and shelter. We know that this virtue is praised throughout the Scriptures. The hospitality of Abraham to three young men who visited him was revealed to be offered to none other than the three Persons of the Holy Trinity. In fact, it is in the forms of these three young visitors that the Holy Trinity is most often represented in iconography. Our Lord Jesus Christ commanded us to offer hospitality when He said:
Comments
×