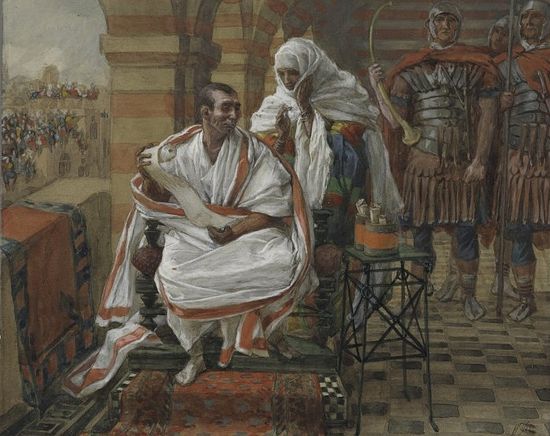 November 9 is the feast-day of Claudia Procula, Pontius Pilate’s wife. She was recognized as a holy martyr by the Greek Orthodox, the Coptic and the Ethiopian Churches. The episode connected with her is perhaps among the most mysterious. In the Gospel according to Matthew (Mat. 27:19) we read: When he [Pontius Pilate.—Trans.] was set down on the judgment seat, his wife sent unto him, saying, Have thou nothing to do with that just man: for I have suffered many things this day in a dream because of him. According to many authors, Pilate’s wife was later converted to Christ, and, according to some evidence, she was executed as a Christian.

Different sources vary on exactly what happened to Pilate after the Crucifixion of Christ: Eusebius of Caesaria wrote that Pilate had been exiled to Vienne in Gaul where manifold misfortunes eventually caused his suicide; according to other information, Pilate was executed by Emperor Nero; and, finally, the apocryphal tradition referred to his repentance, conversion to Christianity and attributed his execution to his faith in Jesus Christ.

Archpriest Oleg Stenyayev speaks about what is known of Pilate’s wife, how she may have suffered, and what Russian people thought of her in olden times. 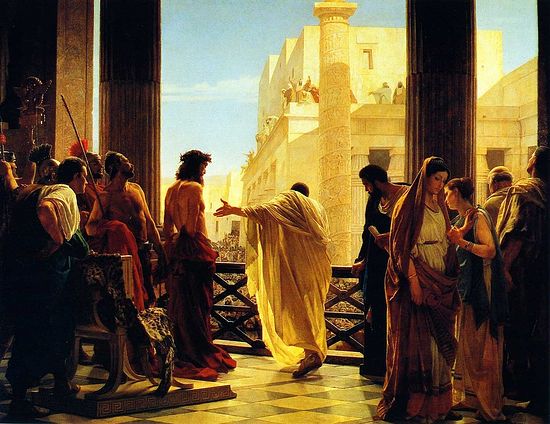 Claudia Procula, according to the third-century early Christian sources (including, first of all, the apocryphal Gospel of Nicodemus), was the wife of Pontius Pilate, a Roman governor. She is venerated as a saint by the Greeks of Cappadocia and by the Ethiopian Church, but there is no universal veneration of her.

I saw an icon of Pontius Pilate and his wife in Hurghada, Egypt. I asked the Copts why they venerate them. And I was answered that this veneration dates back to the earliest times. The Church of Greece commemorates Claudia Procula on October 27 according to the old calendar. The Ethiopian Church honors her memory together with that of her husband Pontius Pilate on June 25. Let us take note of the fact that they are commemorated together—the husband and the wife, which makes it one of the earliest examples of the veneration of a couple by Christians. By the way, there are few saintly married couples venerated by our Church.

It is known from the ancient tradition that Pontius Pilate and his spouse were executed. They may have been executed not for their faith in Jesus Christ; there was no punishment for worshipping “other gods” in the Roman Empire—Roman law did not have an article like this. However, those who refused to perform divine honors before an emperor’s statue could be executed. Meanwhile, Christians interpreted even nominal honoring of non-Christian deities as a kind of apostasy. In the Book of Exodus we read: And make no mention of the name of other gods (Exod. 23:13), and the names of pagan gods are enumerated there. So exegetists make the conclusion that we must not invoke the names of heathen deities as we invoke the Name of true God. 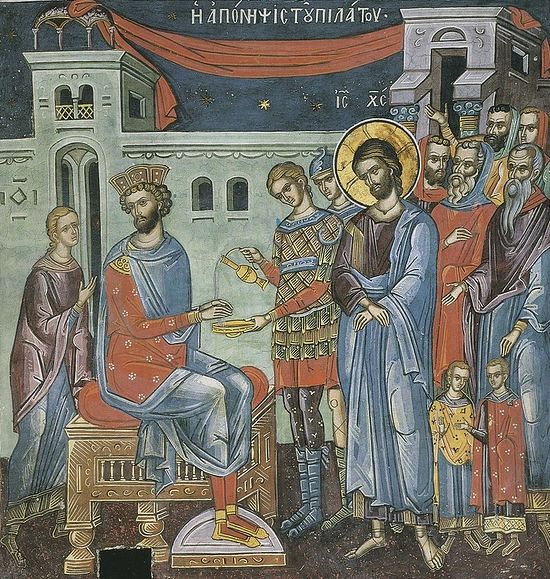 So what really happened at the trial of Jesus? The apocryphal Gospel of Nicodemus gives quite vague information on this. Let me quote from it: “His own wife who stood at a distance sent to him saying: Have thou nothing to do with that just man; for I have suffered much concerning him in a vision this night.” What do the words “concerning him” (or, in other translations, “on his account”) mean: “from” or “for” him? It is not very clear. This place provoked theological debate. Most probably the wretched spirits, who wanted the Savior to be crucified and incited the large crowd to shout, “Crucify, crucify Him!” tried to prevent Pilate’s wife from applying for release of Christ. This is a very important detail that is ignored by many. Thus, the words, “I suffered much concerning him,” should be understood as, “I pled for him and was attacked.”

The apocryphal Gospel of Nicodemus also says that the Jews strove to prevent Pilate’s wife from interceding for Christ. And one more interesting detail: There is a suggestion that she may have been a proselyte and as such had a good understanding of the matters of faith. Furthermore, Pilate used to turn to his wife with faith-related questions. The origins of this tradition are unclear; there are no references in the apocryphal Gospel of Nicodemus. Proselyte wives of high-ranking Roman rulers, especially those connected with Judea, were not a rare phenomenon of that time. According to evidence of Flavius Josephus, the wife of Emperor Nero, Poppaea Sabina, was a proselyte, so it is natural that the tradition described Pontius Pilate’s wife as a proselyte, too.

It is commonly believed that the well-known verse from the Second Epistle to Timothy—Eubulus greeteth thee, and Pudens, and Linus, and Claudia, and all the brethren (2 Tim. 4:21) – refers to Pontius Pilate’s wife. It was a common practice of that era: Those people who were sentenced to death were sent to long exile—let us recall Titus from the Flavian family. It is quite possible that not only was Claudia sentenced to death, but, like Titus (who was of noble descent, from the Flavian family, the dynasty of Emperors Vespasian and Domitian), she also served the apostles and their disciples in exile.

In the Middle Ages it was believed that Pilate’s wife saw a demon with her own eyes, which tormented her and hindered her in her efforts to petition for Christ. So Claudia had a kind of struggle with a demon—the evil spirit supposedly tried to prevent her from seeing Christ in her dream. But it is hard to imagine how a demon could have obstructed her. Anyway the woman had some sort of a struggle—after all, she testified herself that she had suffered much for this righteous Man.

A more detailed account of the trial before Pilate, his wife’s dream, and her later life can be found in the apocryphal work, “The Letters of Claudia Procula to Fulvia”. It was written allegedly in the name of Claudia, Pontius Pilate’s wife, who shares the story of her life in Jerusalem with her friend, devoting special attention to events related to the Gospel story. This text can be found in the internet. Given the title and the style of this work, it can be dated to the second or third century. Here the main principles of writing messages of the era are observed: a letter, from whom, and to whom it is written. “A letter from Claudia Procula to Fulvia.” Compare: “Paul, a servant of Christ Jesus…, I am writing to…” So they first point to their rank, and then name their addressees.

As for the veneration/lack of veneration of Claudia Procula in the Russian Orthodox Church… In olden times Russian people composed spiritual songs dedicated to Pilate and his wife. By the way, these partially inspired the writer Mikhail Bulgakov when he was writing his novel, The Master and Margarita. The contents of these songs are as follows: “Pontius Pilate couldn’t find inner peace after committing such a great crime as the crucifixion of the Savior. In some sense, he had gone beyond all limits, while the severity of a punishment should correspond with the seriousness of a crime. But this crime is so flagrant that there is no punishment that is appropriate for it. Thus Pontius Pilate became a wanderer forever; and his wife is also condemned to accompany him in these wanderings, perpetually mourning over the sin that her husband committed.” But that is no more than a piece of folklore.

One can ask the Old Believers if they have the names of Pontius Pilate and his wife in their Church calendar. This will help us find out whether they were officially venerated in the pre-Nikonian Russia or not. What Christ Accomplished on the Cross
Hieromonk Damascene (Christensen) Ten Things for Holy Week
Fr. Theophan Whitfield
Jesus says to you and to me, “but are you able and willing to drink the cup that I drink from? Are you able to walk with me through Holy Week? Are you willing to be by my side, and to carry my cross with me?”I hope your answer is yes. To help us prepare here is a list of 10 things to do during Holy Week. These are ten recommendations for how to be baptized with the same baptism with which our Lord is baptized. Holy Week and Pascha
The major themes and meaning of each day
Metropolitan Nektarios of Hong Kong and South East Asia
Great Lent and Holy Week are two separate fasts, and two separate celebrations. Great Lent ends on Friday of the fifth week (the day before Lazarus Saturday). Holy Week begins immediately thereafter. Let's explore the meaning of each of the solemn days of Passion Week.
Comments

Kevin Lindamood5/10/2018 3:11 am
What happened to Oleg stenyayev conversation on the old testament family in genesis?

Ronald Anthony Gallo9/14/2017 10:41 pm
We need more writing by "OrthoChristian.com"...Also, I would like to speak with someone if at all possible, because I seem to be having difficulty getting a copy of the article "Pontius Pilate's Wife" by Archpriest Oleg Stenyayev!

Thank you, and May The Lord Bless your Website!!