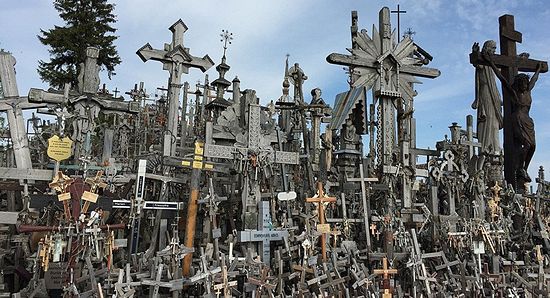 A fire broke out this morning at the famous “Hill of Crosses” in the Šiauliai region of Lithuania, reports Sputnik-Lithuania.

Six firetrucks were sent to the famous Christian pilgrimage site after news of the fire was received at 9:30 this morning. The blaze covered about 10 square meters of the hill, according to Gintaras Zones of the state fire department.

The cause of the fire has not yet been determined. “An investigation will be conducted, but for now it’s too early to talk about the causes. The fire has been basically localized,” Zones added.

The Hill of Crosses, 7.5 miles from the city of Šiauliai, has become a popular pilgrimage place for Orthodox and Catholics. The hill is covered with as many as 500,000 crosses and crucifixes, according to some reports, of various sizes. There is a popular belief that those who bring a cross to the hill will have good fortune.

The hill is along the route from Riga to Kaliningrad.