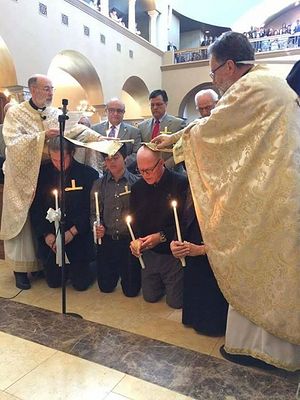 Photo: Facebook
Known to millions as the “Bible Answer Man,” 67-year-old Hank Hanegraaff and his wife were received into the Orthodox Church this year on the great feast of Palm Sunday, at St. Nektarios Greek Orthodox Church in Charlotte, NC.

Mr. Hanegraaff can be seen kneeling with a lit candle under a priest’s epitrachelion in the picture to the right. His wife’s hands can be seen as well. The picture originates from the Facebook page of the parish, but has been removed after an influx of comments, including negative remarks from those who appreciated Hanegraaff’s work as a Protestant.

The Bible Answer Man addressed his conversion to the Orthodox faith on his program yesterday, in response to a caller who had seen remarks claiming that, in becoming Orthodox, Mr. Hanegraaff had left the Christian faith. He responded:

I am now a member of an Orthodox Church, but nothing has changed in my faith. I have been attending an Orthodox church for a long time—for over two years, really, as a result of what happened when I went to China, many years ago. I saw Chinese Christians who were deeply in love with the Lord, and I learned that while they may not have had as much intellectual acumen or knowledge as I did, they had life. And so I learned that while truth matters, life matters more, and I remember flying back from China after spending time with just common people who had a deep, intense love for the Lord, and wondering, “Was I even a Christian?”

I was comparing my ability to communicate truth with their deep and abiding love for the Lord Jesus Christ… One man, by the way, said to me, truth matters but life matters more. In other words, it is not just knowing about Jesus Christ, it is experiencing the Resurrected Christ. As a result of that I started studying what was communicated by the progeny of Watchman Nee with respect to theosis and that drove me back to the early Christian Church.

After reciting the entire Nicene Creed, he concluded, “In other words, I am as deeply committed to championing mere Christianity and the essentials of the historic Christian faith as I have ever been.”

Hank Hanegraaff has served as the president and chairman of the board of the North Carolina-based Christian Research Institute (CRI) since 1989, when he also took over previous-president’s radio talk-show “The Bible Answer Man.” The show includes answering questions about matters of Christian doctrine and history and Biblical interpretation, and denominational particularities. He has been an outspoken critic of non-Christian religions, new religious movements and cults, and heresies within conservative Christianity. He is also the author of over twenty books. His The Complete Bible Answer Book—Collector’s Edition is a compendium of the most common, and the most difficult, questions regarding Christianity, culture, and cults that Hank has received over the past three decades.

It has been noted that Hank has been speaking about the Orthodox Church more on his show lately, referring to it as “fantastic,” and “the early Church.” In 2016, Hank interviewed Fr. Themistoclos (Adamopoulos), a Greek Orthodox priest, to discuss his journey from Marxist rock star to Orthodox monk. Fr. Themi works tirelessly with the poor and suffering in Sierra Leone, where people are still suffering from the effects of a recent Ebola epidemic. The interview can be listened to here.

In March, Mr. Hanegraaff answered a caller’s question about the Orthodox teaching of theosis, ably explaining the doctrine of man’s sanctification on both a Biblical and Patristic basis. “We become Christ-bearers since His Body and Blood are distributed throughout our limbs, as Cyril of Jerusalem said… The whole idea being that we become by grace what God is by nature… We become, as Peter put it, partakers in the divine nature,” the Bible Answer Man explained. A full video of the call can be seen below: Humility and Regret in My Journey to Orthodoxy
Scott Lewis

Humility and Regret in My Journey to Orthodoxy
Scott Lewis
To any of my Protestant brothers or sisters who seek a deeper walk with God and think the original Church died out like we were all taught, then find the nearest Orthodox church and visit it with an open heart. You will not regret it. My Journey into The Ancient Church

My Journey into The Ancient Church
Jeremiah McKemy is an American convert to Orthodoxy from non-denominational churches, who has begun a blog to share with others his own journey. Here is his story.

An Interview With Fr. John Musther of Cumbria
“Christ Won the Battle and Made my Heart Orthodox!”
Dmitry Lapa
Father John Musther, an Orthodox Englishman, serves in the Orthodox missionary parish of Sts. Bega, Mungo and Herbert in Keswick, Cumbria, North West England. His community, which is under the jurisdiction of the Ecumenical Patriarchate, is part of the ancient tradition of the Orthodox Church. The congregation is a living witness of the truth of Holy Orthodoxy to the people living nearby.
Comments

Larry The Russian Lobster 12/6/2018 11:13 pm
I'm so glad he is joining the religion that is Orthodox Christianity. I hope he lives till Jesus returns. I can not believe the amount of Fox News watchers who go in the website and know what they're doing. They really have no clue how the church of the orthodox works as they are the Catholics and protestants. Get out of our turf! Sad!

David6/9/2017 9:20 pm
1st Hank Unplugged podcast w/Frederica Mathewes-Green. They discuss Hank Hanegraaff, host of the Bible Answer Man, who was a high profile Evangelical Leader who recently converted to Orthodoxy and clear up misconceptions many have about it.

Listen to their conversation and subscribe to Hank Unplugged on iTunes and rate the podcast.This could help propel it into the top 20 on iTunes and will hopefully give many people a clearer understanding of what EO truly is.

Fr. Deacon Kevin5/9/2017 6:18 pm
What a joy to see a man who loves the scripture come fully to it's source, Christ's One Holy Catholic and Apostolic Church. Our dear brother will certainly face the assaults of the evil one and those he inspires with pride and spiritual delusion. Pray for him and his family and that others through his testimony and example find their way to the pillar and support of truth, Christ's Holy Catholic Orthodox Church.

Bob Benson4/12/2017 9:46 am
I worked with a woman years ago that believed that if the person baptizing you does not say, "I baptize you in the name of Jesus," but says instead "I baptize you in the name of the Father, and the Son and the Holly Ghost," you were not truly baptized and would condemned to hell. I told her that I did not believe in God the Bureaucrat. It's the true belief and faith in Jesus Christ Resurrected as our saviour that allows his grace into our lives, not the form of worship nor certainly someone else getting the words exactly right that brings us our salvation.

It's a shame to see the ugly comments his former fellow Baptists are making against him, which border on slander. Thankfully, God provides for His beloved flock, and Hank is where he belongs. Amen.

Joseph4/11/2017 9:01 pm
This is great news! I used to listen to his show years ago, and I am so happy to hear that he came to the Church. I hope and pray he was catechized properly, and has a very stable and firm Orthodox foundation. God give you grace, strength and wisdom.

Olga Sivinski4/11/2017 5:33 pm
AWESOME. It's sad that so many people have no clue about Orthodoxy. All the Orhtodox Metropolitans and Bishops in the world need to get together and support each other and get the Orthodox religion out there. I have said this for years, but we seem to get further apart. Can't take communion in a ROCAR church if you are not part of the ROCAR church. ROCAR parishioners don't even recognize the OCA church. When my aunt died, who attended a ROCAR church, just a very few close friends of hers came to her funeral - as she lived 40 miles from my house and I brought her here to care for her. They refused to enter my OCA church where my aunt was laid out. That is just so pathetic. So no wonder people don't know what an Orthodox church is.

Tom Gosse4/11/2017 1:43 pm
God grant him many years. I pray that his witness will bring others to the Orthodox Church. I pray that he will be strong when the inevitable attacks start against him. Lord have mercy on the servant of God, Hank Hannegraaff.

Christina4/11/2017 1:09 pm
Welcome to the original Church that Christ handed down to His Apostles.
×