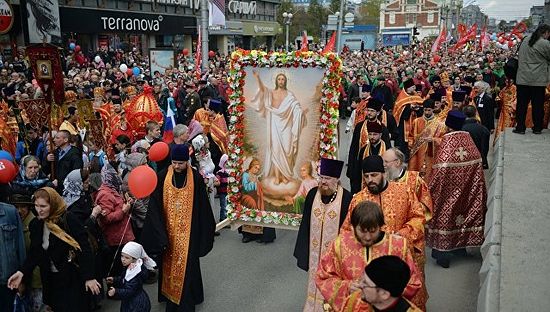 The St. Basil the Great Analytical Center has launched an online petition for Bright Monday, the day after Pascha, to become a federal holiday in the Russian Federation. The center was founded in Moscow in 2016, with a mission “to promote the protection and dissemination of Orthodox Tradition and the traditional Orthodox worldview in the modern world.”

“Given the importance of Orthodoxy in the life of Russia and the constructive character of Church-state relations, we propose to introduce an official holiday connected with the main Christian holiday—Pascha. Given the character and timing of the celebration of the Bright Resurrection of Christ, the new holiday should fall on Bright Monday, the first day after Pascha,” the petition reads.

The authors of the text note that Bright Monday was a public holiday in the Russian Empire before the revolution, when employers of any level were obliged to give their employees the day off, in accordance with article 198 of the empire’s “Charter on Industrial Labor.” Across the whole of Russia people would take part in mass games and festivities and visit friends and family to sing Paschal songs during the whole of Bright Week.

The petition also refers to the ordinance regarding Bright Week found in the canons of the Quinisext Ecumenical Council (Canon 66):

The faithful are required to spend the time in a state of leisure without fail in the holy churches from the holy days of resurrected Christ our God to New Sunday in psalms and hymns, and in spiritual songs called odes, while taking cheer in Christ and celebrating, and paying close attention to the reading of the divine Scriptures, and delighting themselves to their heart’s content in the Holy Mysteries. For thus shall we be jointly resurrected and jointly exalted with Christ. Therefore during the days in question let no horse races or other popular spectacle be held at all.

The creators of the petition also stressed that Russia is one of the few countries where Pascha Monday is not a holiday, although the majority of the population (70-80%) identifies as Orthodox Christian. The only exception in Russia is the Republic of Crimea which retained Bright Monday as a holiday after reunifying with the Russian Federation.

Moreover, the Liberal Democratic Party of Russia has introduced a bill to the same effect into the State Duma, reports RIA-Novosti.

“The federal draft law ‘On Introducing Amendments to Article 112 of the Labor Code of the Russian Federation regarding the establishment of an annual non-working day on the Monday after the Sunday of the religious feast of the Resurrection of Christ’ has been developed for the legislative consolidation of the establishment of a new public holiday of the Monday of Bright Week,” states the law’s explanatory memorandum.

The authors of the draft believe such a law would serve to honor the deep historical traditions of Russian Orthodoxy and to confirm the government and society’s recognition of Orthodoxy’s special role in Russian history, and in the formation and development of its spirituality and culture.

The St. Basil's Center also intends to send a letter to President Vladimir Putin and His Holiness Patriarch Kirill with the request to make Bright Week a national holiday, “Given the extraordinary importance of the feast of Pascha, as well as Russia’s historical experience and the modern practice of many countries in the world.” More than 4 million Russians took part in Paschal service
More than 11,000 services, festal Liturgies, and processions devoted to the celebration of the Orthodox feast of the Bright Resurrection of Christ were held, in which more than 4.3 million people participated.

Anthony4/22/2017 11:20 pm
Komrades. Do we know why Bright Monday is not a holiday. Seems a bit odd for a country that claims to identify as Orthodox?