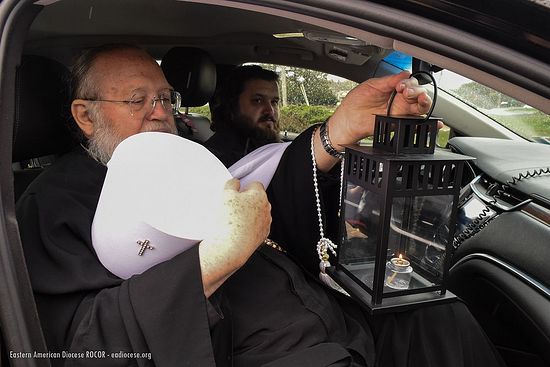 The Holy Fire was brought to America and England by the St. Andrew the First-Called Foundation and the Imperial Orthodox Palestine Society for the first time this year. Two lampadas holding the holy flame from the Church of the Holy Sepulchre in Jerusalem, where the Holy Fire descends every year on Holy Saturday, arrived in New York on Sunday on an Aeroflot flight, Protodeacon Dionysius Lvov of the Russian Orthodox Church Outside of Russia’s Synodal Cathedral of the Icon of Our Lady “of the Sign” reported to TASS.

“For the first time in American history, the Holy Fire was brought to the country,” said Lvov. He noted that it was delivered via Moscow, with the help of the St. Andrew Foundation.

The protodeacon explained that the idea to bring the Holy Fire to America was born long ago, but it was not so simple to realize, noting that a private flight from Jerusalem would have been too expensive, so they decided to bring the flame from Moscow. Many permissions were needed to transport a flame on a passenger flight, however. In the end, the flame was placed inside two special safety lamps originally designed for miners. “Whatever happened with the lamps, the fire could not go out or become dangerous for others,” the protodeacon assured.

From Kennedy airport, where the Holy Fire was ceremoniously greeted, it was taken to the Church of the Mother of God “Inexhaustible Cup” in Brighton Beach, where it was present for the Sunday evening Agape Vespers. The flame was distributed to the gathered parishioners, and one of the lamps will remain in the church there.

The second lamp will remain at the St. Zosima Synodal candle factory, which sponsored the mission, of which Protodeacon Dionysius is the director. The flame was also taken to St. Seraphim’s Church on Long Island, and the ROCOR cathedral in Manhattan. On Tuesday it was taken to the Cathedral of St. John the Baptist in Washington, DC. Parishioners of other churches are welcome to take the flame to their parishes as well.

According to the protodeacon, it is planned to make this an annual event, and, in his view, it is significant that the flame was brought from Russia, as the flame of the Orthodox faith was first brought to America from Russia.

“Spreading the Holy Fire and the holy energies connected with it whenever possible is not just a task, but a necessity for the salvation of the world,” stated philanthropist Timothy Musatov, who was also involved in bringing the flame to London. He noted that the Russian community in London is 300,000 strong, with half that number participating in Paschal services in the Russian cathedrals this year.

Sh. Myrna Martin 5/10/2017 12:47 am
Thank you!
St. Ignatius Church in Franklin, TN got it got it from St. Elizabeth the New Martir church in Murbresboro, TN-whom brought from Antiochian Village in pensylvania
We're grateful very grateful.

Patty Martinovich5/8/2017 8:01 am
The Holy Flame is spreading all across America, and Canada too. Thank you for bringing it here. It is connecting so many Orthodox Christians in such a beautiful expression of fellowship, mutual love and respect, and spreading the light of Christ on this continent. Christ is Risen!