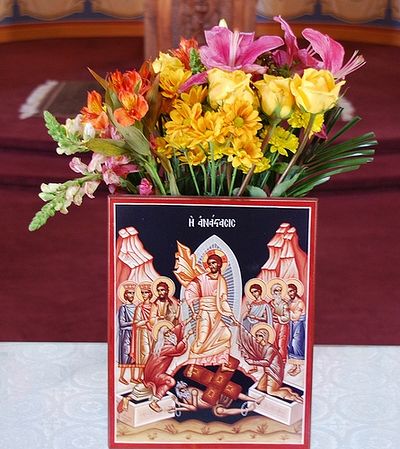 “Hell rules the race of mortal humans, but not eternally; for when You were placed in the grave, O powerful One, You tore asunder the bars of death by Your life-creating hand and proclaimed true deliverance to those sleeping there from the ages, since You, O Savior, have become the first-born of the dead.”  (Pascha Nocturnes)

God warned Adam that should he choose to eat the fruit of the Tree of Knowledge, he would die (Genesis 2). God never said death was a permanent or an eternal punishment. While Death claimed all humans, its power came to an end when Christ died and descended to the place of the dead. Christ raises all the dead, bringing a permanent end to death’s reign over humanity. This is the Good News Christianity proclaims to the entire world’s population.

None of us lives to himself, and none of us dies to himself. If we live, we live to the Lord, and if we die, we die to the Lord; so then, whether we live or whether we die, we are the Lord’s. For to this end Christ died and lived again, that he might be Lord both of the dead and of the living. (Romans 14:7-9)

Despite the Good News and tragically many still choose death. Some think war is the answer to human evils – that we can defeat evil, Satan, death by killing those who we believe are evil. Some think death is the only way to escape the world and they choose it for themselves and sometimes for others. Some are trapped in their own thinking and believe their own death or the death of some around them are the only way out of the box that imprisons them. Orthodoxy sees death as an evil – separation from God. Christ tramples down death by His own death and shows us the way to remain united to the Source of Life even through suffering and death.

“Blessed are the dead who die in the Lord henceforth.”

“Blessed indeed,” says the Spirit, “that they may rest from their labors, for their deeds follow them!” (Revelation 14:13)

Orthodox bless the graves of their deceased loved ones after Pascha because we do believe they are alive in Christ – they are blessed. Christ made it clear that those who we consider dead and buried are alive in God when He said:

“And the fact that the dead are raised Moses himself showed, in the story about the bush, where he speaks of the Lord as the God of Abraham, the God of Isaac, and the God of Jacob. Now he is God not of the dead, but of the living; for to him all of them are alive.” (Luke 20:37-38)

Abraham, Isaac and Jacob died long before Moses came along, yet God speaks about them not in the past tense – I was their God – but as being their God now because they are still alive in Him.

“This is the day of resurrection. Let us be illumined by the feast. Let us embrace each other. Let us call “brothers” even those who hate us, and forgive all by the resurrection, and so let us cry: Christ is risen from the dead, trampling down death by death, and upon those in the tombs bestowing life.” (Pascha Matins)

There is no more joyous day for humanity than Pascha. We are baptized into Christ’s death and raised from the dead with Him to eternal life. Consequently, we can embrace everyone for death has no more power over any of us. Death cannot separate us from our God or from those we love. Death remains the sign that something is wrong with this world. In Christ we find our way to triumph over death and to remain united to the Giver of Life. I am the Resurrection and the Life
Metropolitan Ephrem (Kyriakos)
Christian spirituality is a paschal spirituality. Christ's passion is not a site of grief, but a site of joy. The Lord Jesus told His disciples before His passion, "Most assuredly, I say to you that you will weep and lament, but the world will rejoice; and you will be sorrowful, but your sorrow will be turned into joy" (John 16:20).