We Are More Blessed Than the Apostles

A Homily for Thomas Sunday 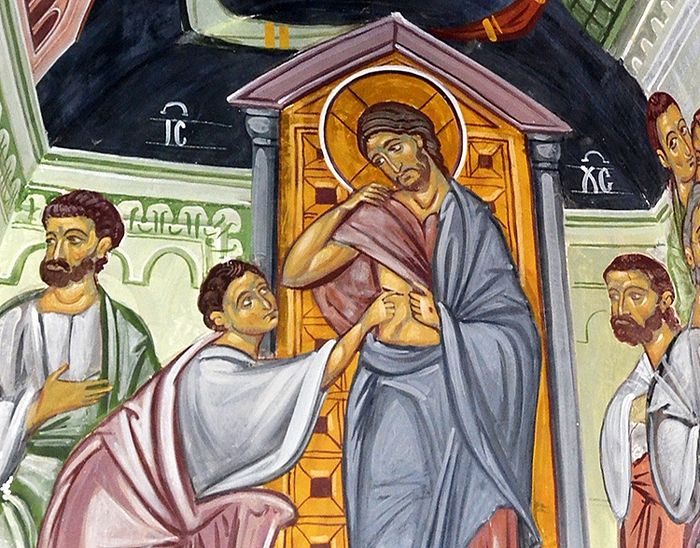 We heard in the Gospel reading today about what assurance one of the twelve apostles—the apostle Thomas—received.

The Lord appeared to the disciples after His Resurrection. When He appeared, He showed them His hands and feet as proof of His Resurrection, and did so more than once. But the apostle Thomas, who was not present with them, expressed some doubt, and responded to the words of the disciples about how they had seen the Lord, Except I shall see in his hands the print of the nails, and put my finger into the print of the nails, and thrust my hand into his side, I will not believe (Jn. 20:25).

Eight days later the merciful Lord again appeared to the disciples, gathered in one house behind closed doors, and said to Thomas: Reach hither thy finger, and behold my hands; and reach hither thy hand, and thrust it into my side: and be not faithless, but believing (Jn. 20:27). The apostle Thomas’ doubt has become to some extent proverbial, has grown wings, and become common knowledge, and often causes us modern Christians to even condemn the apostle Thomas. We wonder, how could he have doubted? In reality, even in the Gospels we see that there is nothing surprising in this. The apostle Thomas was not alone in his doubt.

If we look closely at the Gospel events after Christ’s Resurrection, we see with what doubt the apostles often responded to what was happening. They did not believe Mary Magdalene (cf. Mk. 16:9-11), and they did not believe Luke and Cleopas, when the Lord appeared to them on the road to Emmaus (cf. Lk. 24:1316), but they constantly doubted. Therefore, to confirm them in faith, the Lord gave confirmation of His human nature, by eating before them and showing them His wounds.

But what fruit the apostle Thomas’ doubt brought the Church! The Lord again proved that He is the true God, and that He is risen from the dead. And the Church even lauds this unbelief of Thomas in its hymns today, thanks to which we are strengthened in faith. Faith only asserts itself by this unbelief.

And the apostles, having often betrayed Christ, having feared just like normal people, and having experienced doubts, proved this faith with their whole lives and their apostolic ministries. They were stronger than the rulers of this world, stronger than the laws, stronger than pagan teachings, and stronger than the Pharisees with their ancient traditions; and they feared nothing, preaching the Gospel to all ends of the universe. They gave their lives for Christ, and like their Teacher, they also proved that life is mightier than death, and that the Lord is more important for us all than the temporary fulfillment of our passions. The apostles belonged to the family of those who saw Christ and believed.

Returning then to today’s Gospel reading, the Savior’s words, addressed to the apostle Thomas and the other disciples, acquire a particular importance for us. After the Lord showed Thomas His wounds, he said, My Lord and my God! (Jn. 20:28). This is the witness he brought. And Jesus answered, Because thou hast seen me, thou hast believed: blessed are they that have not seen, and yet have believed (Jn. 20:29).

This firstly refers to the following generations of Christians, to the disciples of the apostles, the disciples of those disciples, and to us all. We have not seen Christ, come into the world in the flesh, and therefore we are worthy of such blessedness—having not seen Him, we believe. The fathers of the Church say that this bliss is a pledge of great blessings for us, perhaps greater than the holy apostles were accounted worthy of, but on condition that we, like the apostles, full of this blessedness, must give our entire lives to Christ, and serve His Gospel evangelism. This is the condition for felicity. Such a great gift the Lord gives us: We are more blessed in this world than the apostles.

There is another kind of people, who saw Christ and heard the Gospel message, but remained unbelieving. First among these was the Pharisees and the Sadducees, who understood Who it was that stood before them, Who came into this world. These were people of the Scripture, perfectly knowing the prophecies, but they did not receive Christ. And we, Christians, knowing the Gospel, often find ourselves in their place. Sometimes our knowledge as if further removes us from Christ.

It is especially important for people who have studied theology. How often, as historical examples tell us, people who have seemingly reached the heights of mental knowledge of God, having studied everything, having read everything, become terrible cynics and lead others into yet greater destruction.

May it not be so with us, dear brothers and sisters; may we be along with the apostles simple, faithful, sincere, and, of course, to the best of our ability, students and preachers of the risen Christ; may we be bearers of the good news of the all-conquering Gospel truth. The Stubborn Apostle
Fr. Daniel Sysoev
Paradoxically Thomas’ disbelief only emphasizes the faith of the apostle and helps us to believe. This disbelief only confirms for us the fact of Christ’s victory over death. Now we know that we die not forever, that we do not need to fear the grave. Its predatory mouth will release all its prisoners, for God has promised us eternal life in the flesh. And it’s not simply a promise, for Christ, the Firstborn of the dead, is already risen, to carry out from the grave with Him all of mankind. The Good Unbelief of Thomas
Monk Moses of the Holy Mountain

The Good Unbelief of Thomas
Monk Moses of the Holy Mountain
Faith, we would say, comes with difficulty, hazard, risk and daring. This is why He blessed those who believe without tangible evidence. The strongest evidence is the confirmation of our hearts. The hard-to-believe Thomas is our brother, he is weak, but definitely sympathetic. St. Thomas Sunday
Archbishop Dmitri (Royster)
The following is a brief reflection on the Gospel reading for the Sunday after Pascha, John 20:19-31
Comments
×