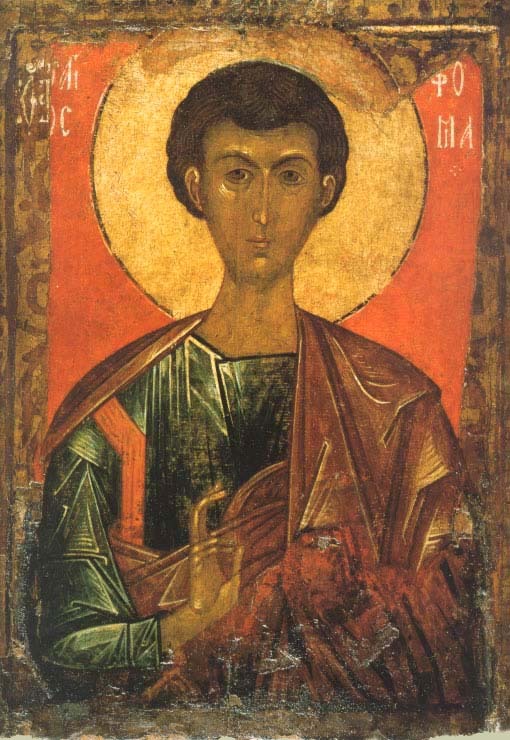 But Thomas, one of the twelve, called Didymus, was not with them when Jesus came. The other disciples therefore said unto him, We have seen the Lord. But he said, Except I shall see in His hands —I will not believe (John 20:24-25).

As to believe carelessly and in a random way, comes of an over-easy temper; so to be beyond measure curious and meddlesome, marks a most gross understanding. On this account Thomas is held to blame. For he believed not the Apostles when they said, We have seen the Lord; not so much mistrusting them, as deeming the thing to be impossible, that is to say, the resurrection from the dead. Since he says not, I do not believe you, but, Except I put my hand— I do not believe. But how was it, that when all were collected together, he alone was absent? Probably after the dispersion which had lately taken place, he had not returned even then. But do thou, when you see the unbelief of the disciple, consider the lovingkindness of the Lord, how for the sake of a single soul He showed Himself with His wounds, and comes in order to save even the one, though he was grosser than the rest; on which account indeed he sought proof from the grossest of the senses, and would not even trust his eyes. For he said not, Except I see, but, Except I handle, he says, lest what he saw might somehow be an apparition. Yet the disciples who told him these things, were at the time worthy of credit, and so was He that promised; yet, since he desired more, Christ did not deprive him even of this.

And why does He not appear to him straightway, instead of after eight days (John 20:26)? In order that being in the mean time continually instructed by the disciples, and hearing the same thing, he might be inflamed to more eager desire, and be more ready to believe for the future. But whence knew he that His side had been opened? From having heard it from the disciples. How then did he believe partly, and partly not believe? Because this thing was very strange and wonderful. But observe, I pray you, the truthfulness of the disciples, how they hide no faults, either their own or others', but record them with great veracity.

Jesus again presents himself to them, and waits not to be requested by Thomas, nor to hear any such thing, but before he had spoken, Himself prevented him, and fulfilled his desire; showing that even when he spoke those words to the disciples, He was present. For He used the same words, and in a manner conveying a sharp rebuke, and instruction for the future. For having said, Reach hither your finger, and behold My hands; and reach hither your hand, and thrust it into My side; He added, And be not faithless, but believing (John 20:26).

Do you see that his doubt proceeded from unbelief? But it was before he had received the Spirit; after that, it was no longer so, but, for the future, they were perfected.

And not in this way only did Jesus rebuke him, but also by what follows; for when he, being fully satisfied, breathed again, and cried aloud, My Lord, and my God (John 20:28), He says, Because you have seen Me, you have believed; blessed are they who have not seen, and yet have believed John (20:29).

For this is of faith, to receive things not seen; since, Faith is the substance of things hoped for, the evidence of things not seen (Hebrews 11:1) And here He pronounces blessed not the disciples only, but those also who after them should believe. Yet, says some one, the disciples saw and believed. Yes, but they sought nothing of the kind, but from the proof of the napkins, they straightway received the word concerning the Resurrection, and before they saw the body, exhibited all faith. When therefore any one in the present day say, I would that I had lived in those times, and had seen Christ working miracles, let them reflect, that, Blessed are they who have not seen, and yet have believed.

It is worth enquiring, how an incorruptible body showed the prints of the nails, and was tangible by a mortal hand. But be not thou disturbed; what took place was a matter of condescension. For that which was so subtle and light as to enter in when the doors were shut, was free from all density; but this marvel was shown, that the Resurrection might be believed, and that men might know that it was the Crucified One Himself, and that another rose not in His stead. On this account He arose bearing the signs of the Cross, and on this account He eats. At least the Apostles everywhere made this a sign of the Resurrection, saying, We, who ate and drank with Him (Acts 10:41). As therefore when we see Him walking on the waves before the Crucifixion, we do not say, that that body is of a different nature, but of our own; so after the Resurrection, when we see Him with the prints of the nails, we will no more say, that He is therefore corruptible. For He exhibited these appearances on account of the disciple. His Bodily Wounds and Ours: Homily for Thomas Sunday in the Orthodox Church
Fr. Philip LeMasters

His Bodily Wounds and Ours: Homily for Thomas Sunday in the Orthodox Church
Fr. Philip LeMasters
The good news is that Christ does not ask us to conquer sin and death by our own power, for He has already done that. But He does ask us truly to have faith, which requires a faithful life, even as we constantly ask for His mercy and strength to participate as fully as possible in the joy of His resurrection. Homily: Do Not Be Faithless, but Believing!
Rev. Gregory Jensen

Homily: Do Not Be Faithless, but Believing!
Rev. Gregory Jensen
Sometimes faith is a struggle because we are so unaccustomed to joy. In this life, peace is often foreign to our experience and forgiveness rare. Sometimes, like Thomas, I doubt because of the brightness of the Divine Light. Have You Seen the Lord? Does it Make You Glad to See Him?
Fr. Stavros Akrotirianakis

Have You Seen the Lord? Does it Make You Glad to See Him?
Fr. Stavros Akrotirianakis
How, then, do we see Christ? We see Him through the eyes of faith, which are sharpened through the eyes of vulnerability. Make yourself in some way vulnerable to the Lord, whether it is in the spiritual intimacy of prayer, or the difficult task of forgiveness, the humility needed in the sacrament of confession, or in the selfless act of service to others. Make yourself vulnerable to the Lord and you will “see” Him and have the joy that the Disciples had when they saw the Lord.
Comments
×