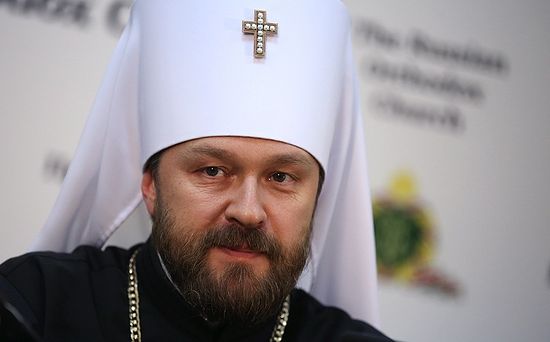 The Russian Orthodox Church played no part in, and was not consulted on the decision of the Russian Supreme Court to recognize the Administrate Center of the Jehovah’s Witnesses in Russia as an extremist organization and to ban its activity within the Russian Federation, Metropolitan Hilarion (Alfeyev) stated in a television interview, TASS reports.

“I would like to emphasize that the Church had no part here, and they did not consult with us. The Church does not call for heretics, sectarians, and dissidents to be subjected to criminal prosecution,” the metropolitan said.

However, he also expressed his view that the banning of the Jehovah’s Witnesses is a positive step in the fight against the spreading of sectarian ideas having nothing in common with the Christian religion.

“I hardly doubt that sectarians will remain and continue their activity, but at least the fact that they will stop openly equating themselves with Christian confessions is for the better,” His Eminence explained, adding that the group’s activities violate civil law in addition to perverting the teachings of Christ. He pointed out that they do not believe in Jesus as God and Savior, nor do they recognize the dogma of the Holy Trinity, as Interfax-Religion reports.

“It’s a sect, and a totalitarian and harmful one at that. I know very well, because I have had multiple chances to speak with former members of the sect,” Met. Hilarion stated, adding that their activity is based on “the manipulation of the conscience, and they destroy the psyche of people and families.” The Russian Ministry of Justice vs. the Jehovah’s Witnesses Administrative Center in Russia: an Eyewitness Account

The Russian Ministry of Justice vs. the Jehovah’s Witnesses Administrative Center in Russia: an Eyewitness Account
Igor Kondrashev
The situation was rather intense, because over 200 Jehovah’s Witnesses who were present at the session had to listen to evidence from four of their former co-religionists who showed the other side of the organization’s inner life. As we know, Jehovah’s Witnesses are strictly forbidden to communicate with so-called “apostates”—former members of the sect whose activities are directed against the organization. Russian Supreme Court bans activities of Jehovah’s Witnesses
The court’s new decision directly affects about 400 registered sites of the organization, and 2,277 groups throughout the country, consisting of 175,000 followers of the religion, according to the Administrative Center. Activities of Russian Jehovah’s Witnesses suspended due to extremism “Jehovah’s Witnesses Do Not Need a Search for the Truth”
Interview with Artem Grigoryan, a former long-standing member of Jehovah's Witnesses
Priest George Maximov, Artem Grigoryan
In association with the Russian SPAS (Savior) TV channel, Pravoslavie.Ru has begun publishing a series of remarkable stories about our contemporaries who embraced the true faith after following various false teachings.
Comments

TERRENCE SQUIER8/19/2020 5:14 am
The United Nations will attack religion after the next proclamation of peace and security . 1 Thessalonians 5:3

Ian9/9/2017 11:46 am
Extremists kill with knives and guns,
Slaying, cruelly, our loved ones.
Some they slice or crucify
And claim that God would have them die.
While Witnesses, who do not kill,
We terrorise as if they will!

Can tears retell the times like these,
When, instead upon our knees,
We vied for pain and punishment
Upon the lost or innocent?
Is it not now time to change;
Our thoughts and hearts to rearrange:
To be like Christ who came to save
And raise us from this darkest grave?

Ian9/7/2017 7:07 pm
Some ex-Witnesses have bleak tales. Mine is pretty bland. After the trauma of doctrinal disagreement, every friend regrettably vanished. Yet, our Lord told us to love our enemies; to do good to those who mistreat us and pray for them. We are bidden not to hate, but to love; not to harm, but to heal; not to persecute, but to persuade; and, in emulation of him, to empathise and pray: “Father, forgive them, for they know not what they do.” If we do not, are we not denying our Father and becoming other than our Lord? Before I left, an elder said: ‘Let me know, Ian, when you find a church as loving as the Witnesses.’ Would endorsing their banishment have convinced him?