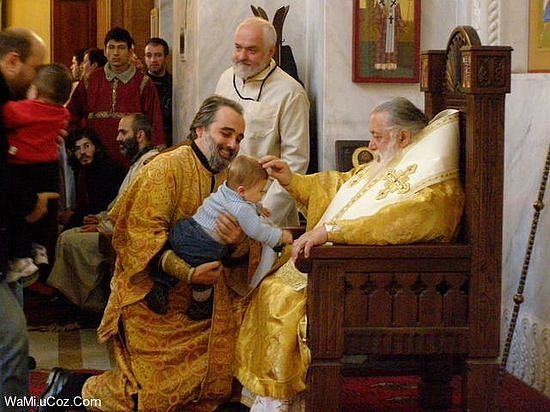 This past Sunday the holy Myrrhbearing Women were celebrated in all Orthodox churches throughout the world, and on the day of these holy women who became the first witnesses and heralds of the Lord’s Resurrection, more than 1,000 Georgian children were united to the risen Lord in the holy Sacrament of Baptism, reports Romfea.

The latest in the regular mass Baptisms was celebrated in Tbilisi’s Holy Trinity Cathedral by His Holiness Patriarch-Catholicos Ilia II. 1,173 children were baptized on Sunday, while over 800 were baptized at the previous celebration on the feast of Theophany in January.

The patriarch blessed all of his new Godchildren, giving each one a baptismal cross.

Patriarch Ilia has to date acquired more than 30,000 Godchildren. Tabloid sites way off on Patriarch Ilia, Georgian Baptism
Various tabloid sites have been circulating an inflammatory “report” against His Holiness Catholicos-Patriarch Ilia II of Georgia, charging him with “cruelty” and “abuse” for his supposedly “rather violent” technique in baptizing infants, stemming from the recent mass Baptism celebrated on Theophany, January 19.