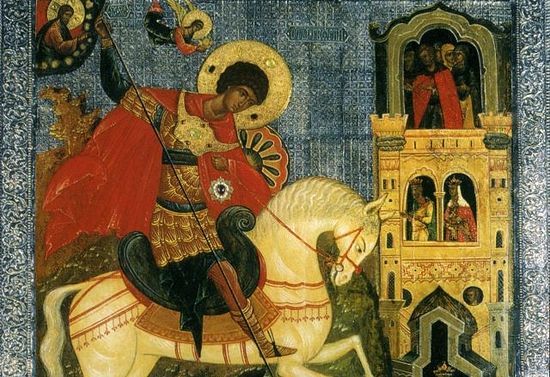 The Great­martyr George, for his valour and his spiritual victory over his torturers, who could not force him to renounce Christianity, and likewise for his wonderworking assistance to people in danger, is additionally called the "Trophy­bearer." The relics of St. George the Trophy­bearer were placed in the Palestinian city of Lydda, in the church that bears his name, while his head was preserved in Rome, in the church that is also dedicated to him.

As the deliverer of captives/ and the protector of the poor,/ as the physician of the feeble and combatant of kings,/ holy champion and great martyr George,/ intercede with Christ our God to save our souls.

Thou wast cultivated by God/ and didst become a most wonderful cultivator of piety,/ and didst harvest for thyself the sheaves of virtue,/ for having sown in tears thou didst reap in joy/ and having withstood death thou art garnered for Christ./ By thy intercessions, O Saint,/ thou dost obtain for us all remission of our sins.

Once, when he heard in a court the inhuman sentence concerning the annihilation of Christians, St. George became inflamed with compassion for them. Foreseeing that sufferings were also awaiting him, George distributed his property to the poor, freed his slaves, appeared before Diocletian and, having revealed himself as a Christian, denounced him for cruelty and injustice. George's speech was full of powerful and convincing objections against the imperial order to persecute Christians.

Regularly, the secular media report stories about England's current patron-saint. There are those who complain that St George is 'a Turkish saint'; others project the image of a knight in medieval armour; yet others claim him as 'the patron of the English football team'. Where does such nonsense come from and who is the real St George?

St. George and the Muslims

What an Infidel Saw that a Believer Did Not. Miracle in the Church of St. George

St. George and the Muslims

What an Infidel Saw that a Believer Did Not. Miracle in the Church of St. George

Although Orthodox Christians have endured much suffering at the hands of the Turks, there are many people in Turkey born to Muslim families who nevertheless respect and venerate St. George, and pray to him for help.

Sermon for Feast of St. George at the Romanian Orthodox Mission to the Holy Land

Sermon for Feast of St. George at the Romanian Orthodox Mission to the Holy Land

The Holy and Great Martyr Saint George, a son of this Holy Land, has given us his blessing to be here together on this feast in the light that shines from the empty Tomb, so that we may proclaim in our generation the Good News of Christ’s Resurrection and His philanthropy to all humankind. Christ’s righteousness is the light of truth, and our spiritual mission is to be a beacon of that truth.

Homily on the feast of Great Martyr George.

"Pray to your patron saint!"

Homily on the feast of Great Martyr George.

"Pray to your patron saint!"

There was a close connection between St. George and me. When I was in prison I always called upon him, and he helped me in many circumstances. From that time on and to this day I never cease to pray to him every day.

We always tend to rely on a miracle in our faith. But the Lord works miracles precisely in the moments when we really need them.

Commemorated on April 23/May 6

Commemorated on April 23/May 6

The Holy Great Martyr George the Victory-Bearer, was a native of Cappadocia (a district in Asia Minor), and he grew up in a deeply believing Christian family.