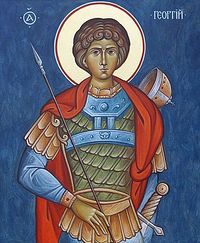 Regularly, the secular media report stories about England's current patron-saint. There are those who complain that St George is 'a Turkish saint'; others project the image of a knight in medieval armour; yet others claim him as 'the patron of the English football team'. Where does such nonsense come from and who is the real St George?

George was born in about the year 283 to a rich Greek family in Cappadocia. Cappadocia is in what we now call Turkey - although then, and for hundreds of years afterwards, there was not a single Turkish person in Cappadocia. For the Turkish peoples invaded Asia Minor only much later and the name Turkey did not exist.

The name George means husbandman, a worker of the land. This is why in the Matins to St George, we hear how he earned his name in a spiritual sense, for he became a spiritual husbandman, sowing the seed of God and working in His fields.

When George was young, his father was martyred for Christ and his mother moved away to Palestine. Palestine was so called after the Philistines, whom we remember from the Old Testament as being the enemies of the Jews. Today's Palestinians, still enemies of the modern Jews, are Arabs. They too are cousins of the Jews, both being Semitic people, though Palestine is better known to Christian believers as the Holy Land.

The young George joined the Roman Army, but remained a believer. Nevertheless, George was immensely successful, quickly becoming an officer and then a tribune. A tribune was one of six officers in charge of a legion, a legion at that time being composed of about 6,000 infantry with a strong cavalry detachment. (This is the explanation why St George is shown on icons on horseback).

When George was aged twenty, he was arrested for his faith, which he fearlessly confessed, in the persecution of the Emperor Diocletian. This arrest took place at Lydda in Palestine. This is about twenty-three miles to the north-west of Jerusalem, some seven miles to the south of Arimathea (now Ramallah) and some seven miles to the south-east of Joppa, which is on the coast. We understand how close all the places we have spoken of on recent Sundays are. All these places are near Jerusalem, the site of the Resurrection; St Joseph of Arimathea came from nearby; St Tabitha was raised from the dead in Joppa; and now we speak of Lydda. 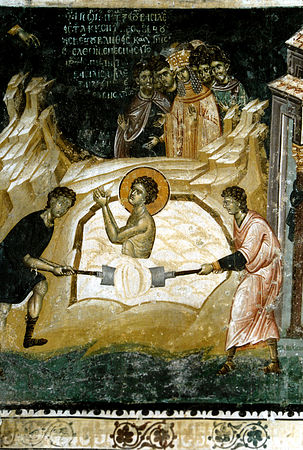 Sufferings of Great Martyr George.
Refusing to renounce the faith, the tribune George was imprisoned and then cruelly tortured. First, he was placed in stocks and a large weight was placed on his chest. This must surely have broken some of his ribs, leaving him in great pain. Then he was tied to a wheel which was turned around, but underneath the wheel there were great nails sticking up from a board. These must have torn his skin from him. Then he was buried up to his head and left for three days. Finally, he was given poison. However, despite all these tortures, George not only survived, but was also miraculously healed, his unceasing prayer giving him the strength to defy his torturers. Seeing his courage, two soldiers, Anatolius and Protoleon, a priest, the governor and others, were converted to the faith. Not only they, but also the Emperor's wife, the Empress Alexandra. Thus, it was that they too were all martyred, being commemorated today, and George was beheaded.

The first question that we now ask ourselves is why St George has become such a great saint. There were thousands of martyrs at this time, including our own Protomartyr St Alban, who was possibly martyred in the same persecution in the same year, but at the other end of the Roman Empire. It has to be said that in this respect St George resembles St Nicholas. Their lives are both relatively short and yet both have become universally popular saints. The reason for this must be that they both received great glory from God. Their sacrifices gave them great power. This indeed is why miracles began over St George's relics straightaway, which is why the Church gave him not only the title 'Great-Martyr', a title granted to very few, but also the title 'the Wonderworker'. In addition, St George has a third title, 'the Victorious', for he was victorious over the Emperor of Rome, over the pagans, over the devil.

His victory is why we see St George portrayed as a Roman tribune on a horse defeating a dragon. The dragon of course symbolises the devil. Here we should recall that in the Book of Genesis, the punishment given by God to the serpent who had tempted Adam and Eve, was that he would thenceforth have 'to go on his belly' (Genesis 3, 14). From here it is clear that the serpent originally had legs, which is why one of the names for the devil is 'the old dragon'. For what is a dragon, if not a snake with legs? Indeed, the memory of the devil as a dragon has been kept in the folklore of many countries, as for example in the Far East.

Unfortunately, this was not understood by the Crusaders, more or less barbarians, who in the twelfth and thirteenth centuries went to the Holy Land. There they saw icons of the soldier-saint and, with their primitive, literal mentality, failed to understand that the dragon depicted was symbolic, not literal. And yet it had been understood in the West in earlier times. Thus, one thousand years ago, the Old English preacher Aelfric, wrote a life of St George, in which there is no mention of any dragon. The fact that the Empress Alexandra was martyred together with St George, led to the other very late medieval distortion, that St George had killed a dragon in order to free a princess. Thus, the medieval knight of the George myth - an image very far from the reality of the early Christian soldier-martyr.

Veneration for St George, like that for St Nicholas, has not ceased worldwide, including among Protestants and Muslims. In Protestant England, the expression 'By George' is the only remaining invocation of a saint still in use. In Europe, St George is popular in many countries, perhaps especially in Portugal, England and Russia; the crest of the City of Moscow being the icon of St George. The country of Georgia was named after him and the Georgian flag has five red crosses on it, being a more advanced version of the English flag. With regard to what we think of as the Standard of St George, the English national flag, this is in fact the flag of Jerusalem, flown at the Orthodox Patriarchate of Jerusalem today. It is also this flag that appears on certain very late icons of the Resurrection. The white indicates the sinlessness and purity of Christ, the red cross represents the blood sacrifice on the Cross of the Son of God, that became the victory over death, the whole being what we might call 'the flag of the Resurrection'.

The veneration for St George actually increased in some parts of the world, especially in Russia, in 1945. For the end of the Second War in reality came on Sunday 6 May, which was the coincidence of Orthodox Easter and St George's Day. Even though peace negotiations were not concluded until midnight on 7 May and peace publicly declared after midnight on 8 May, that terrible War in fact ended on 6 May. St George remained, and remains, the patron of those that defend right against might.

Holy Great-Martyr and Wonderworker George the Victorious, Pray to God for us!

(Abridged from the talk given in Felixstowe parish-hall after the liturgy on Sunday 6 May, 2007)