The Healing of the Paralytic and the Loneliness of Modern Man

Now there is at Jerusalem by the sheep market a pool, which is called in the Hebrew tongue Bethesda, having five porches. In these lay a great multitude of impotent folk, of blind, halt, withered, waiting for the moving of the water. For an angel went down at a certain season into the pool, and troubled the water: whosoever then first after the troubling of the water stepped in was made whole of whatsoever disease he had. 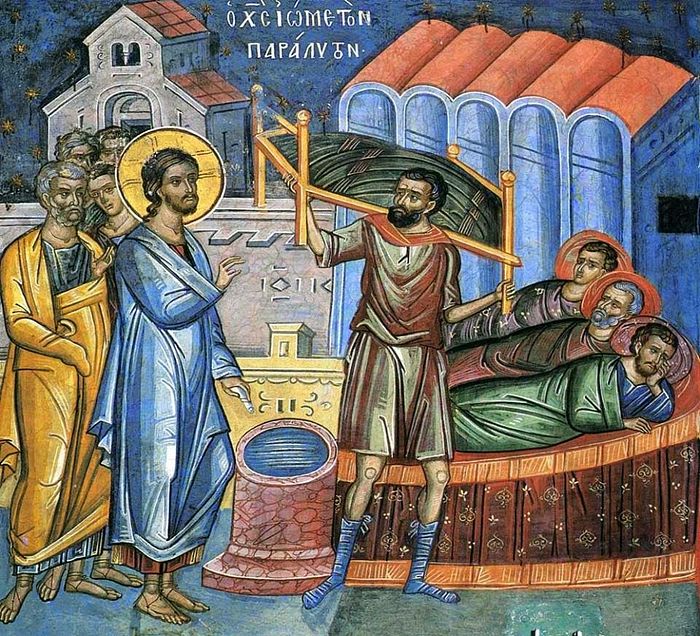 What is most dramatic throughout this entire Gospel reading is the loneliness of the sick man. Did you hear it? The impotent man answered him, Sir, I have no man, when the water is troubled, to put me into the pool: but while I am coming, another steppeth down before me (Jn. 5:7). The most tragic state a person can be in is loneliness, total isolation.

St. Cyprian of Carthage says that, “Each person falls in isolation, but we are saved in the community of the Church.” To be alone means to fall, to perish. Being alone means not thinking about anyone other than yourself, because you are overwhelmed by the surge of suffering in which you are being suffocated. You are depressed by the futility of life. This is because a life lived in loneliness, if you do not have God with you, is a futile, wasted life. Life lost its meaning back in that very moment when you became alone.

That sick man did not even have any family member or friend who would take him up when the water was stirred and throw him in, so that he would be healed. How many times do we find ourselves in a situation like that! How often are we lonely and sick, and we have no one to help us be healed, no one to deliver us from our suffering! Or perhaps in our loneliness and suffering we do not find anyone we can communicate with; or as the German saying goes, pain when shared becomes half as bad, but pain unshared is twice as hard.

That is how it was with this man. But Christ with great mercy asked him, “Do you want to be healed?”

We will see proof of this later, when the Savior meets him in the church and says, Behold, thou art made whole: sin no more, lest a worse thing come unto thee (Jn. 5:14).

What also touches us and others is that in the very minute that Jesus healed the man who had been paralyzed for thirty-eight whole years, instead of rejoicing that a man had regained his health, the scribes and Pharisees are angry, and say, “Why are you walking, why are you carrying your bed on the Sabbath?”

They didn’t say, “It’s great that you’ve been healed! Yes, go and thank God!” No, they were only interested in the formality of the law, which stated that it was forbidden to work on the Sabbath. They sacrificed a human being for the sake of observing this law.

And they asked him, “Who healed you?”

At first the healed man did not know how to answer them. But when Jesus met him in the church, he went to the Jews and said, “There, it was Jesus who healed me!”

This was not a denunciation to set the Jews after Jesus. This was the desire to announce for everyone to hear, “This Man helped me! He healed me! He was near me in my troubles!” We have to say it when someone has helped us. We have to testify to a miracle. Not in order to boast, but because we have been delivered from loneliness, sickness, and suffering! I have to say who helped me, who led me to the faith, who delivered me from sins and the cursedness of my heart—a priest, a believer, a friend… I have to say, “He saved me!” That’s how it was with this paralytic.

Beloved faithful! Modern society is isolating us more and more. The governments—not only the communist, but all governments—are more and more trying to isolate us, to make us more lonely, so that we would be less and less bonded with each other, so that we would not associate with each other, because all governments are trying to become totalitarian in order to control us. It is much harder to control tight communities of people than isolated individuals, and therefore governments are trying to isolate us.

Freedom falsely understood is rebellion against God; it is nihilism. That is how we have gotten to where we have gotten, to all of these crimes that are raging in the world. There are so many cities where fourteen-year-old children have murdered their teachers, friends, and parents. The human bond has been broken with the people next to us, with whom we live. Heartfelt relationships have been broken between me and my brother, me and my parents, between parents and children, between friends. We are becoming more and more alone in this exaggerated individualism, at the foundation of which lies the demonization of society.

Let us try to be united. Let us try to remain united by faith and love one with another, with Jesus Christ. Let us abide in unity in the Church, because the Church is the only positive social union. All other unions are leading us to self-destruction. They are all aiming to destroy the human being, to turn it into an instrument, an ordinary cog in this complicated mechanism of human society. VIDEO: The Nature of Depression
Fr. Dmitrius Basalygo
In this video. Fr. Dmitrius Basalygo speaks about depression, which the holy fathers considered one of the most severe passions of the soul, which hinders us from taking up our Cross and becoming that which Christ created us to be. Sermon on the Sunday of the Paralytic
Archimandrite Kirill (Pavlov)

Sermon on the Sunday of the Paralytic
Archimdrite Kirill (Pavlov)
We sometimes wish that our petitions and prayers would be fulfilled immediately, not considering that God knows better than we what is more profitable for us and when to offer us consolation.
Comments

JThomas Phillips 5/21/2019 3:44 am
Regarding the above article by Fr. George Calciu
Translated from the Russian version by Nun Cornelia (Rees)Pravoslavie,ru 5/8/17; A couple of thoughts and observations: Anthony Nun Cornelia is correct in stating that Fr. George was addressing us to live within the Church, the Ecclesia, or the Body of Christ, wherein we can if we are living and being responsive to the ascetical practices of prayer, reading of the Sacred Scriptures and the Holy Fathers, & Elders / as well as the Lives of the Saints, confession,and Liturgy, we are then invited to receive the Eucharist-His Body and Blood into our very being. This is no small objective and event in the life of us Orthodox Christians.

m. Cornelia5/9/2017 10:15 am
Anthony: I think that the community Fr. George is talking about here is only the community of the Church--our parishes and monastic communities. This may spill out into the rest of the world.

Anthony5/8/2017 10:48 pm
I agree completely with the latter part of this article - governments are attempting to set up one against another through ''individuality'', ''human rights'', ''freedom'' etc. where everyone thinks they are special and owed everything at the expense of everyone else, - you can see what society becomes like - dog eat dog. Go to western Europe with their marvellous architecture and art etc. etc. but just look at western whitey's society. Arrogant and deeply unpleasant beyond.

Whilst I accept that God made us to be communal, I just don't think that all circumstances permit it today, depending on where you are. There are some places so hellish, with such insane people that you simply are better off being alone. Look at Lot in Sodom and Gomorrah. Was he better off being in that ''community'' - I think not. So it really depends on what kind of society you live in. I accept I am not a saint, and will never become one which is why I cannot just accept and get over and love everyone even we are commanded. I would personally not keep company or be in society that exists as that which does today.

Joseph Bell5/8/2017 7:41 pm
Loneliness is actually the pathway to solitude. True spiritual solitude is, in fact, the union with God. There is the example of St. Mary of Egypt. She, like St. Anthony before her followed the path of loneliness towards God. "If you cross the Jordan you will find glorious rest," were the words that she heard.
The path of loneliness tests one's soul. The result, with faith, is unexpected. There are some that see St. Mary of Egypt only as an example of someone clinging to God against difficulties and temptations. My view, however, is a little different. I see her as one who saved the Church.