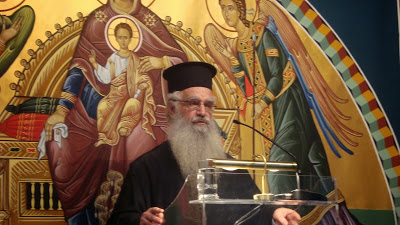 His Eminence, Anthimos
Metropolitan of Thessaloniki

With sorrow, but also with much spiritual joy and happiness, I wish to inform you by means of the present letter that I am ceasing to commemorate your name during the holy services following the Apostolic and Patristic tradition as this pertains to communion with heretics on account of the fact that you, along with many of your fellow bishops, have abandoned the Holy Tradition and strayed from the path of the Holy Fathers.

Symbolically, this God-pleasing action, commended by the Holy Canons, will occur on the Sunday of Orthodoxy (March 5th, 2017) when we celebrate the restoration of the holy icons and read out the Synodikon of Orthodoxy with its anathemas against all heretics. Thus, within the context of divine worship we show that we condemn the pan-heresy of Ecumenism and reject the pseudo-council of Crete, which has recognized heresies as churches, and affirmed syncretistic and destructive Ecumenism.

The black clouds of heresy have been allowed to cover and darken the blue sky of the Orthodox Faith, to divide and set at odds the Orthodox faithful, to interrupt the uninterrupted continuity and succession of the Orthodox dogmas for a nearly a hundred years. Now, however, by God's grace and cooperation, through the prayers of the All-Holy Theotokos and of the God-instructed and God-illumined Holy Fathers, we do our part to disperse the black cloud of pan-heretical Ecumenism by our fervent Orthodox confession, just as the black cloud of Iconclasm was dispersed after having tried the Church for more than a century. Together with other priests—some of whom, being unable to bear the darkness any longer, have already come out into the light, as the monks of Olympus of Bithynia did during Iconoclasm—we have made a beginning. It is our hope that in continuation God will raise up and reveal Patriarchs and Bishops as he did in that era, bringing about a new Triumph of Orthodoxy over new, hidden, and dangerous powers of darkness.

In order that the comparison with Ecumenism to Iconoclasm might not be thought unfitting, here we will only take the time to say that Ecumenism is worse than Iconoclasm in many regards. Apart from its many other serious dogmatic issues, through its connection with Protestantism it attacks the veneration of the Holy Icons and slanders and deprecates the most-honorable and unique person of the All-Holy-Theotokos, along with the rest of the Saints. In the so-called “World Council of Churches” we co-exist and co-mingle with these iconoclasts and haters of the saints, the enemies of the Panaghia and of the Saints, and we debase the One, Holy, Catholic, and Apostolic Church, transforming it from the, “…pillar and ground of the truth,” (1 Tim. 3:15). from the Bride and Body of Christ, (1 Corinthians 12:27, Ephesians 1:12, and 4-5) into something equivalent to the tiniest and most abject Protestant heresy.[1] That the pseudo-council of Crete extols this Protestant mélange of heresies, recommends that we continue our participation in it, and recommends that we persist in degrading the Church, ought to be cause enough for us to reject it.

2. Ecumenism has met with Disapproval for Decades

We shall not present the anti-canonical, anti-orthodox, anti-patristic, anti-conciliar activities that have occurred and continue to occur in our relations with old and new heresies, relations which should have resulted in the defrocking and conciliar condemnation of those who have transgressed the sacred canons and traditions. For many decades now holy elders, confessors, hierachs, clergy and monastics, wise and conscientious professors, as well as a large portion of the healthy faithful—and particularly the Holy Mountain—have sought and continue to seek our withdrawal from the so-called “World Council of Churches” (or better, “of Heresies”) as well as our condemnation of the pan-heresy of Ecumenism. Praiseworthily, the churches of Bulgaria and Georgia have already done this. This subject continues to agitate the consciences of all those who recognize the depth of the ecclesiological deviation these things represent.

In order to express their longstanding unease and distress, the Synaxis of Orthodox Clergy and Monastics prepared and circulated the Confession of Faith against Ecumenism in 2009. This truly historic text was signed by a great number of hierarchs, hundreds of clergy and monastics, and thousands of the faithful, and includes the following subsections: 1) We maintain, irremovably and without alteration, everything that the Councils and the Fathers have instituted; 2) We proclaim that Roman Catholicism is a womb of heresies and fallacies; 3) The same things apply to an even greater degree to Protestantism, which as the offspring of Papism has inherited many heresies, but has also added many more; 4) The only way that our communion with heretics can be restored is if they renounce their delusion and repent, so that there may be a true union and peace: a union with the Truth, and not with delusion and heresy; 5) As long as the heterodox continue to remain in their errors, we avoid communion with them, especially in common prayer; 6) Up until the beginning of the 20th century, the Church has steadfastly and immutably maintained a dismissive and condemnatory stance towards all heresies; 7) This inter-Christian syncretism has now expanded into an inter-religious syncretism, which equates all the religions with the unique knowledge of and reverence for God and a Christ-like way of life – all revealed from on high by Christ; 8) We believe and confess that salvation is possible in Christ alone. The religions of the world, but also the various heresies, lead man to perdition; 9) There are of course collective responsibilities also, and chiefly in the ecumenist mindset of our hierarchs and theologians, towards the Orthodox body of the faithful and their individual flocks.[2]

Read the rest at Orthodox Ethos

[2] Synaxis of Orthodox Clergy and Monastics, Confession of Faith Against Ecumenism, July 2009. http://jordanville.org/files/Articles/A-CONFESSION-OF-FAITH.pdf. Anthony5/12/2017 10:27 pm
What an amazing man. Such a firm bulwark against the accursed heretics seeking to destroy our faith. I saw some photos the other day of the phanar Bartholomeos busy clapping alongside the heretic of Rome, whilst a Nigerian voodoo witch was doing a dance. In another photo, he was shown 'praying' in a synagogue. I think if Orthodox really cared about their faith, and really understood just how dangerous schismatics like the phanar and his motley crew are, then voices would be a lot louder, and holy innocents like Pater Theodoros wouldn't be suffering ''excommunication'' at the hands of these lunatics.
×