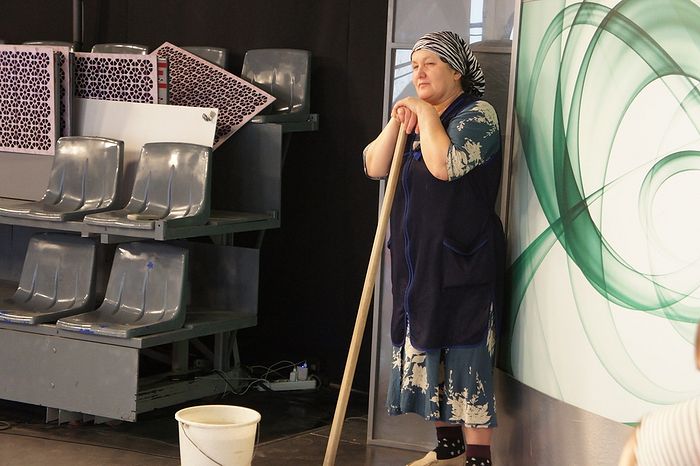 The absence of passed-down tradition in modern daily Orthodox life often leads us to situations when we believe in Orthodoxy, but we don’t know how to react to those everyday situations in a Christian way. Perhaps the following unpretentious examples from the life of a simple Russian woman might aid us in resolving this complicated problem.

Nadezhda Mikhailovna had worked all her life as a house painter-stuccoer, but in the 1990s she was forced by circumstances to work as an auxiliary laborer in a confectionary. This was brutal work, as they say, “for survival”. It was twelve hours of work with practically no breaks (a half hour for lunch). The factory’s floor and walls, pots and vats, confectionary tool parts, one-and-a-half-meter kettles, a two-and-a-half-meters-tall oven, and utility rooms needed to be scrubbed nonstop. This was a “work front” in the full sense of the words. The younger employees were barely able to keep up with the volume of work, which they performed with moans and groans. But this did not apply to Nadezhda Mikhailovna.

Babka Nadya, as her younger co-workers named her, not only always managed to finish her jobs but she even had time to help the other cleaning ladies, and even the confectioners. And she did it with a professionalism that astounded the specialists. For example, when baking the cakes, they were supposed to weigh the dough (90 g.) on an electronic scale before placing it in the pans. Babka Nadya could do this “by eyeballing it” with astonishing speed. Inspection would always show errors of no more than the allowable 1-2 grams. She forbade the young janitresses to lift the large kettles into the washtubs alone (“Don’t do that! You’ll break your back!), although she herself could do this quite deftly alone. Moreover by the end of the shift, when the loaders were flagging from long hours of labor and too much “doping”, Babka Nadya would load the finished products into the refrigerator.

No one ever saw that indefatigable laborer depressed or weary. If the workload would reach its apogee, Babka Nadya would stop, walk to the center of the hall, and wiping her hands on the hem of her smock pronounce the “sacramental” phrase: “Girls! When will life get worse?!” The “girls”, who up to that moment were working on their last legs and in total silence, would freeze for a few seconds from the unexpectedness of this pronouncement and then, filling their lungs to capacity with air, would with little regard for decorum pour out all their accumulated grievances upon “Mikhail’na”. We must note that after these lettings off of steam, work would go on in a much merrier atmosphere.

Despite her love of labor, Babka Nadya did not suffer from perfectionism. “Don’t strain yourself,” she taught her young teammates. “Think before you do something. One job should be done right away, another later, and another maybe doesn’t need to be done at all.” Once, the shop manager, apparently in anticipation of the sanitation committee’s visit, gave the janitresses the unprecedented, impossible, and admittedly senseless task of purging the four square yards of ceiling from many years of soot. There weren’t the time, the strength, or the means to accomplish this grandiose scheme. Only Babka Nadya portrayed neither fear nor confusion. She rapidly slammed together something like scaffolding out of tables and stools, climbed onto the very top and began energetically slashing away with the mop. Her colleagues stood with unmasked fear below, carefully observing what they viewed as a stuntman’s trick. However strange as it may seem, thanks to Babka Nadya’s agility and energy this circus act ended quickly. On the one hand her bosses were satisfied with the obedience and self-denial of their subordinates (albeit in the singular tense), and other the other hand they became convinced of the futility of their poorly contemplated assignment.

Babka Nadya’s wisdom extended not only to her employment spheres, but also for example to her family relationships. Thus, in her relationship with her children she always held to the following principle: “Drop everything and listen to your child.” “No matter what I’m doing,” she recalled when she was already a grandmother, “if a child comes to me to talk I drop everything, and until I’ve heard everything he has to say, I won’t do anything else.” “For instance, my son comes home from the movies and I am washing the dishes. ‘Mom, I was at the movies.’ I turn off the water, wipe my hands on my apron, and lean against the refrigerator. ‘Really?! What was the movie about?’” The next fifteen minutes would be filled with an explanation very much resembling one of Agniya Barto’s1 poems: “And so he started telling his tale: ‘They were crawling, and he went—flail! And then well she was crawling too, and he then kicked him with his shoe! They got her—wham! She got them—bam! But then he hurled and save the girl, and he’s with her and she’s with him… Oh my goodness what a film!’” Babka Nadya took part in the conversation, accompanying her son’s story with emotionally embellished exclamations: “Well how about that! Wow! You don’t say!” Having told his tale her son would depart fully satisfied that he had received his mother’s total understanding; and his mother, not understanding a thing by every bit as pleased, continued her interrupted work.

And when her sons grew up, they did not loose their living, trusting relationship with their mother. “My children love me,” Nadezhda Mikhailovna shared. “They call me, visit me, and never abandon me.” Here is some good old folk pedagogy for you.

I wrote this story down from the words of my wife, who in her youth worked with Babka Nadya at that very confectioner’s shop. Once I asked my wife, “Do you ever remember Babka Nadya’s advice?” “You know,” she admitted, “whenever I do something that’s not right, I remember.” “Well,” I thought, “I supposed that’s another positive result.” A sharp dressed man
Fr. John Moses
You’ve heard it said that “clothes make the man.” If that is true then I am an unmade man.

"It is our fault that there are people who do not know Christ"
Metropolitan Athanasios of Limassol talks about end times, trust in God and the mission of Church
Metropolitan Athanasios of Limasol
Confession is the simplest way to learn what people think about and to understand their problems or concerns. I am very happy when people view their bishop as their father. I am happy when I know that people can come to my church and find me there to tell me about their problems.
Comments
×